Just now, Ezekiel was flying (literally attempting to do so) into bed for his rest time, when he crash landed into my knee.  Owie!  I'm sure that we're both going to have nice bruises to prove that he cannot fly.  He was very apologetic, sitting there holding his knee, with a look of pain spread across his face (probably, much like the look on my face), when I noticed another huge bruise on his shin.  He explained that he ran into a rock in the backyard, while he was playing, after lunch.

Then, I was trying to steal a quiet moment, this morning, just to use the restroom, when Adina came barreling through the door.  She's super into using everything and everyone to help herself stand lately, so it didn't take her long to try to climb the side of the toilet.  The fact that I was sitting on it didn't seem to deter her one bit.  Almost as soon as she pull herself up, she came crashing down, smacking her head into the side of the bowl.  Poor baby!  I rocked her and patted her and dried away her tears.  (Yes, I was still sitting on the toilet.  I knew you were asking yourself, but what do you do when your baby is crying?!)  Now, she's got a hefty bruise square in the middle of her forehead to match the bruise, under her nose, she received, in the nursery, at church, on Sunday.  Next time, I'll be locking the door.

So, I thought that I'd share a couple pictures of Adina successfully pulling herself up... no crashing into anything, no tears, no bruises, and perfectly, safe landings.  It can be done! 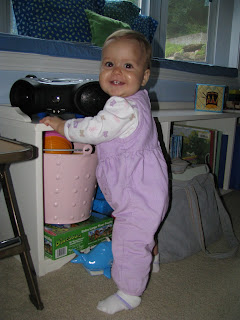 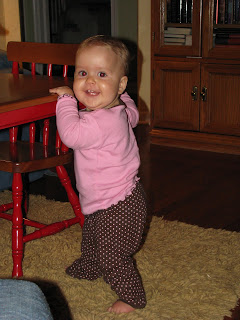 A few months ago, I was sooooo excited to win this stamp set, Damask Designs, from a random drawing Dawn McVey did on her blog.

I have been having so much fun with it!  I cannot stop using it!  I made this card for my sister's birthday the end of May. 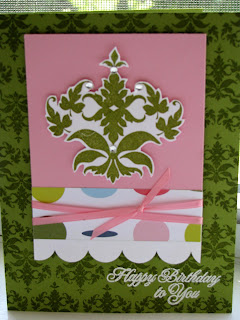 Notice the damask pattern all over the background, and then again, larger, as the hand cut focal point, embellished with gemstones.  The white, embossed sentiment even came from Damask Designs.  Stop me!  I trimmed out the bottom of the pink, cardstock layer with a white scallop I created using Stampin' Up's Slit punch.  Then, American Crafts' patterned paper added a new element, with its polka dots, without straying from the original color scheme.  I wrapped the smaller layer with a skinny, pink ribbon and popped it off the card face with dimensionals.

Then, I took Damask Designs out again (I never really put it away.) for an anniversary card I made for my parents and a thank you card that I made for BJ's aunt. 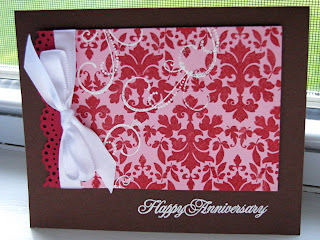 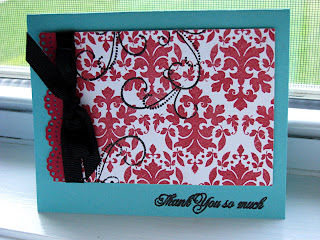 Both use the exact same layout.  I just changed up the color schemes.  There's that large, damask pattern all over the smaller layer.  I stamped and embossed flourishes over the pattern and trimmed off the left edge using Martha Stewart's Doily Lace Edger punch.  Before I popped the smaller layer off the card face with dimensionals (I've got to get more of those!), I tied a matching ribbon around it and added a Damask Designs, embossed sentiment just below it.
Posted by Jinny Newlin at 2:20 PM