Ezekiel has been studying Noah in his Bible class.  (You can read more about Noah and the flood in Genesis 5:28 through 9:19.)  I have heard this story dozens of times, since I was little, and it has always been one of my favorites.  I love how...
Today, when we finished with our reading of Noah, all I could think was that I so desperately want to be pleasing to God!  I don't want to let Him down!  I want to be chosen, like Noah was chosen!  I want to stand firm, in my faith, in the face of adversity!  I want to be like Noah!  I want to be safe!

Some of you have heard about the arrest of Jesse Dimmick, after his taking hostages, Jared and Lindsay Rowley, in Dover, Kansas.  What you may not know is that Lindsay is BJ's cousin.  Click here to see the video of Jared and Lindsay's interview, following their escape.

After seeing this video, something greater hit home for me... maybe it was...
Whatever it was, if you're reading this, Jared and Lindsay, we love you and are so thankful to God for keeping you safe!

There's something about papercrafting that brings me a sense of peace.  So, this card is for Jared and Lindsay. 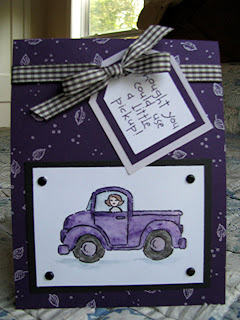 Knowing that Jared and Lindsay are huge K-State people, I decided to go with a Wildcat, color scheme.  I started with a dark purple background, that I stamped with white, fluttering leaves and dots, and the white cardstock, that I stamped, with the truck image.  I, then, watercolored the truck image in shades of Eggplant Envy, Pale Plum, Basic Black, Close to Cocoa, and Bordering Blue; and embossed the truck body and hubcaps to give it a more refurbished, old truck appeal.  (I was trying to steer away from the old clunker look.)  I also grounded the image with a Bordering Blue, watercolor shadow.  The truck image was framed with black cardstock and anchored, in all four corners, with black brads.  I stamped the sentiment, which says, "thought you could use a little pickup," in Eggplant Envy ink and punched it out, using Stampin' Up's Tag punch.  I hand cut the dark purple and lighter purple frames, using the orignial punched sentiment as a guide.  After using Stampin' Up's old, Handheld Rectangle punch on the left side of the sentiment (or the top of the tag), I threaded a black and white gingham ribbon through, wrapped it around the card itself, and tied a bow for that perfect, finishing touch you know I love so much.
Posted by Jinny Newlin at 3:11 PM