It's been a melancholy day.  We dropped BJ off at the airport this morning, for a work trip, and drove home in silence.  When we got home, we tried to get more of our lessons accomplished; but it was difficult to focus through Ezekiel's tears of, "When will Daddy get back?" and "Why couldn't we go with him?" and "When do we get to fly on an airplane?"  Poor kid!  It was a chilly, rainy morning on top of all the tears, so I whipped up a couple comfort foods for lunch... toasted peanut butter and apple butter sandwiches with hot cocoa.  BJ left a note on Ezekiel's, Cheetos container (as well as, under my work mat, on my craft desk). 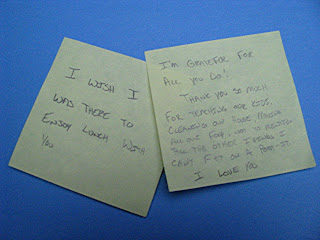 So, Ezekiel had his own message that he wanted to send Daddy. 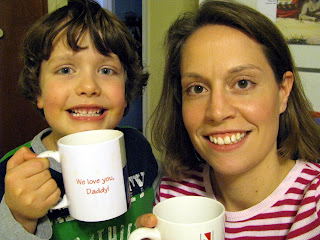 He also wanted me to pull his shade for his rest time, because he was tired.  Usually, that's a HUGE no-no!  He always wants to read.  I promised to make his favorite for dinner... Fettuccine Alfredo with homemade French bread.  Maybe that will help to change the course of our day.

I wanted to show you a new card set up in my Etsy shop Lofty Designs. 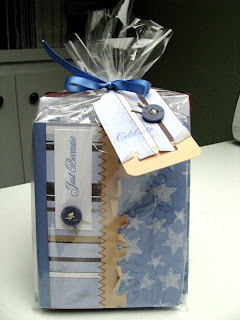 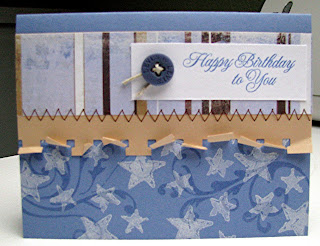 I had the male population in mind in the making of this set, but they're feminine enough for a lady, as well.  I began by stamping stars on the blue, card base, using Moonlight White, Brilliance, archival, pigment ink.  I, then, clear embossed flourishes over the top.  I told you that you'd be seeing more of that technique soon!  I added a kraft-colored (light brown), cardstock layer, punched with Stampin' Up's Spiral punch, as well as, a layer of patterned paper that I had in my stash.  I joined the two layers with a brown, zig-zag stitch and adhered them above the stamped portion of the card base.  I stamped several different sentiments, including "Thank You so much", "Just Because", "Happy Birthday to You", "Praying for you", and "Happy Anniversary", on white cardstock, using Brocade Blue ink. 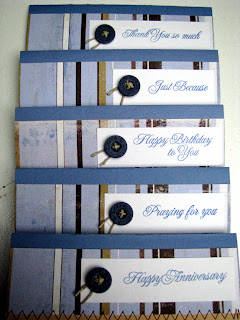 The sentiments were, then, layered on top of the patterned paper and embellished with Levi's buttons which had been laced with hemp twine.

Here's hoping your day isn't as melancholy as ours.  Be blessed!
Posted by Jinny Newlin at 2:17 PM