Off to a Good Start

Things got much better after yesterday's post.  Ezekiel took a good nap, and we found several more Post-It notes from my hubby... the first on Adina's rice cereal box, the second on my pillow, and the third, which actually has a little story behind it, but I'll have to save it for another post, on my coffee container. 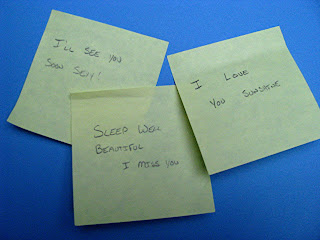 Ezekiel was hunting all over this morning for that last Post-It.  It was so funny!  BJ had told him that there were a total of five, and it was like a treasure hunt for him!  We found it at lunch, when I needed a little pick-me-up.  I even slept like a log last night, even though BJ wasn't home.  That never happens, but I'm exhausted and haven't been feeling the best.  I guess it's bound to happen, when I have a baby sneezing on me, sticking her boogery fingers in my mouth, and wiping drool all over my face.  Adina's definitely a cuddler!  She's doing much better, though... with having been sick, I mean.

I'm participating in a fun challenge this week.  It's for a new, online publication called Embellish Magazine. 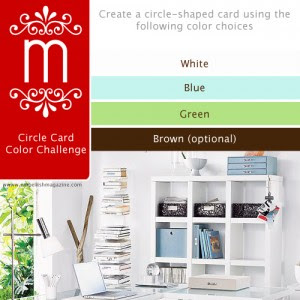 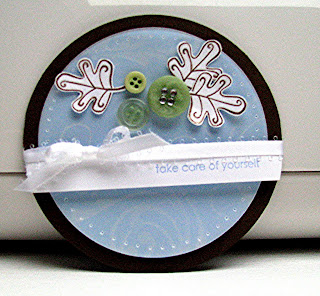 I had so much fun making this card, and I've already sent it to my sister, Jana, who is having a tonsilectomy as I type.  Poor thing!  I've been there and had that done, and it wasn't pretty.  I actually found a new medication that I was allergic to in the process.  Needless to say, it was a bum Christmas break!  Anyway, she's been in my thoughts and prayers all day and should be receiving this in the mail.

I started by cutting two 4" circles, from brown cardstock, with my Fiskars circle template.  I, then, cut two 3-1/2" circles, using the same template... one from light blue cardstock and one from vellum by Paper Studio.  I stamped flourishes, with Moonlight White, Brilliance, archival, pigment ink, on the light blue cardstock and paper pierced dots all around the edges of the vellum.  I, then, adhered the light blue cardstock to one of the brown, cardstock circles, as well as, the vellum over the light blue circle, being careful to hide the placement of the glue dots.  I joined all four circles with a brad, for easy opening, hidden under the "take care of yourself" sentiment which was stamped, in Bashful Blue ink, on white cardstock and popped off the card face with dimensionals.  I stamped the leaves, with Close to Cocoa ink, on white cardstock; cut them out; added a little shine with my Gelly Roll pen; and adhered them, over the vellum, just at their base, so I could bend up the edges as if they had just landed there.  Finally, I added three green buttons, one of which was embellished with four gemstones by Paper Studio, and a pretty, white ribbon tied in a bow just above the sentiment.
Posted by Jinny Newlin at 1:47 PM

this is so very adorable, I luv it....great job!

Too cute, Jinny! Thanks so much for participating in the challenge!