A Weekend At Home

We had another busy weekend!  We didn't have anywhere we had to go, but with having been gone on the weekends lately, there was plenty to get done right at home.  Saturday morning, while Adina took her nap, and I baked a loaf of pumpkin banana bread, for dinner, and played in the loft (aka craft room), the boys took off, to Lowe's, to get Christmas light clips.  We didn't want to put staples in our pretty, new roof!  As it turns out, they were conducting a Build and Grow Clinic; so, Ezekiel came home all decked out in a new work apron, complete with goggles, boasting his new, snowman, picture frame creation! 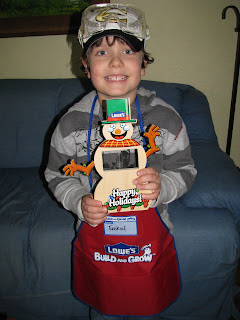 He, immediately, found his favorite picture; had me trim it down to fit; and, proudly, displayed it on his bedroom dresser, but not before I snapped a quick picture. 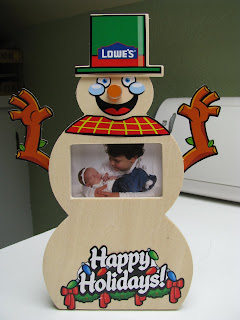 No matter how much he says, "Mine!", or pushes her out of his way, or won't let her come into his bedroom, because there's too many things that, "aren't for babies," I still know that he really does love his baby sister so much.  His Sunday school teacher even told us, this week, that when he asked Ezekiel what one thing he was truly thankful for, he said, "my baby sister, Adina."  That brings tears to this momma's eyes, people!

Saturday afternoon, I got to run do a little Christmas shopping, while the kiddos rested, and BJ watched football.  Then, we spent the rest of the afternoon cleaning the inside of the windows and screens.  I know you're thinking, "what fun!", hopefully sarcastically, but it's got to be done.

Oh!  We, also, finally, got new neighbors!  The house next door has been sitting empty for almost two years!  So, we had to go introduce ourselves and take them a loaf of pumpkin banana bread, to go with their dinner, too.  Yum-O! 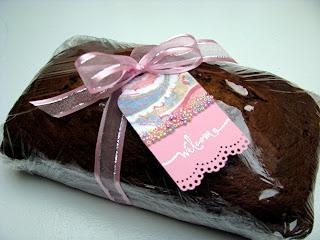 I punched the little, Pretty in Pink cardstock tag, across the bottom edge, with Martha Stewart's Doily Lace Edger punch.  I, then, layered on some pretty, pastel, patterned paper, from my stash, and a strip of Terrifically Tacky Tape covered with pastel Seed Beads from Create-A-Craft.  The "welcome" sentiment was silver embossed to match the silver trim on the pink, sheer ribbon.

Sunday, after watching the Chiefs WIN 27-24 against the Steelers, and before watching Jimmie Johnson celebrate making history as a four time Nascar Sprint Cup Champion (Wow!  What a great weekend for our boys!), we got all the windows cleaned, this time, on the outside.  Now, every time I look out the windows, I have to take a second glance, because I think they're open!  Hee!  Hee!  I think that it's going to get done a lot more often.  Wink!  BJ also got all the Christmas lights hung.  He is, however, under strict orders not to turn them on until this Friday night.  I mean... I wouldn't want to just rush right past my favorite holiday or anything!

If you made it to the end of this post, you're amazing!  I know there's a lot of what may seem like boring stuff about my family, but it's my life!  I wouldn't wish for any other!  Have a great week!
Posted by Jinny Newlin at 2:31 PM