Jennifer is at it again!  She has started another card drive called... 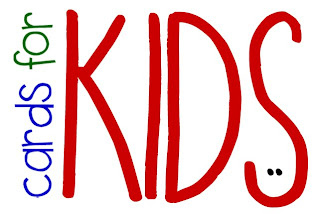 in hopes of collecting a ton of cards for eight sick children, including little Kate (who, just this Monday, was readmitted, to Phoenix Children's Hospital, for her fifth round of chemotherapy), and their families.  I have really loved reading Kate's blog, hearing of her ups and downs, and learning how to better pray for her specific needs and am thrilled to do the same for these other seven, precious children.

I decided to start with Braden. 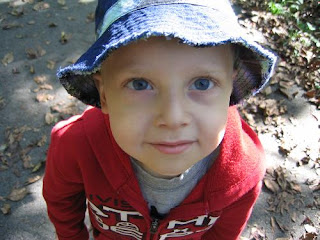 According to Jennifer's blog, Braden was diagnosed with Stage IV, high risk neuroblastoma on December 28, 2007, at the age of 3.  Braden was given a 30% chance for survival at that time.  He went through six high dose rounds of chemotherapy, an autologous bone marrow transplant, radiation therapy, and follow-up therapies.  Braden was declared to be in remission, but merely a few months later, and only a few weeks from his fifth birthday, his cancer relapsed.  Braden, now, has only a 10% chance for survival. Braden is undergoing medical treatments both at Children's Mercy Hospital in Kansas City, Missouri, and at the Children's Hospital of Philadelphia. 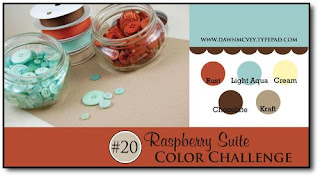 Here is the card making it his way, even as I type. 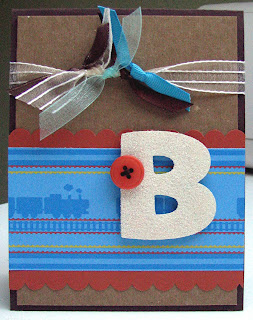 Would you believe it?!  I think that I'm the only papercrafter in existence that doesn't have a stitch of kraft cardstock in her craft room.  So, I tried this card so many different ways using Close to Cocoa cardstock, but it just wasn't cutting it.  In a moment of exasperation, I threw my head into my hands with a huff and noticed something krafty-colored peeking at me from the trash can.  It was the cardboard backer from our photo, Christmas cards!  (I'm relieved to say that those finally made it out, in the mail, yesterday.  I'm breathing again.)  So, I snatched it up, trimmed it, and layered it over the Chocolate Chip, cardstock, card base.  I, then, found a leftover piece of train, patterned paper, from Ezekiel's scrapbook, in my scrap drawer, that boasted just the right colors.  Not to mention, I haven't met a five-year-old boy, yet, who doesn't live, eat, and breathe trains... or dinosaurs :).  I layered it on Really Rust cardstock; punched the cardstock, across the top and bottom, with Stampin' Up's Scallop Edge punch; and adhered it, near the bottom of the card face, over the kraft cardboard.  A cream "B", for Braden, was cut using my Mickey Font Cricut cartridge; glittered; adhered, with dimensionals, over the patterned paper; and embellished with a rust-colored button, laced with chocolate brown, embroidery floss.  A handful of cream, chocolate, and light aqua ribbons, tied in knots, dress up the card and complete the look.

If you'd like to get involved in Cards for Kids, you can find all the necessary information here on Jennifer's blog.  Thanks for reading.  Have a wonderful Wednesday!
Posted by Jinny Newlin at 2:44 PM

Perfect use of the cardboard. That's what kraft paper really is, after all ;)! Very cute card!