So, remember the drum set Adina got for her first birthday? 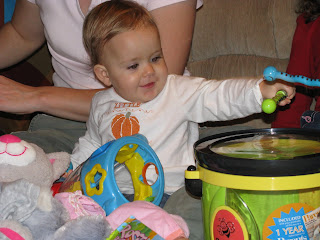 Well, not only has she been playing it and the tambourine, jingle bells, and clapper that came with it, but she has also figured out how to play the flute. 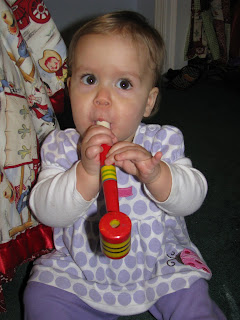 No kidding!  Music really comes out of it!  When I first heard it, I was getting dinner ready and thought it was Ezekiel; but then, I realized that there were two musical sounds coming from his room and went to check it out.  He had a little, party squawker, and she was playing this!  Smarty pants!

So, I've got Pencil Lines Sketch 163, for you, this week.  This one comes from Pencil Lines founder Anna Bowkis. 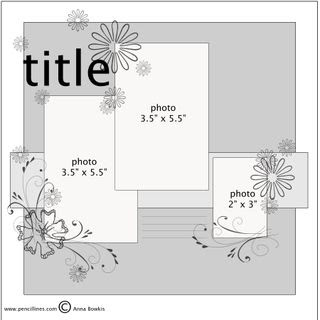 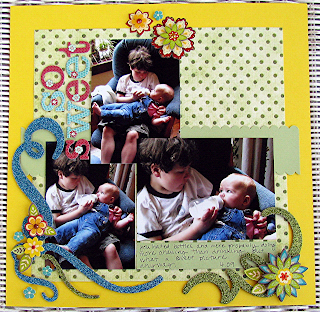 I started this layout by layering the green, polka dot, patterned paper, from My Mind's Eye's Where the Heart Is collection, on a Yo-Yo Yellow, cardstock background.  I, then, horizontally, across the center of the layout, added a strip of Certainly Celery cardstock, which had been punched, across the top and bottom, with Stampin' Up's Scallop punch.  The pictures and Certainly Celery, cardstock, journal box, which says, You hated bottles and were probably doing more chewing than drinking, but what a sweet picture anyway.  4.09, were added next.  The "so sweet", chipboard letters, as well as the three-dimensional, glitter, flower stickers are from K&Company; and the flourishes are chipboard punch-outs, from Best Occasions, which I glittered and adhered to the layout with mini glue dots.
Posted by Jinny Newlin at 7:55 AM

I so love your pages you show. You have such creativity. It also comes out in your photos and your blog. Thanks for sharing