I had an awesome dream last night that left me feeling uplifted and excited about what my future, near or far, may hold.  While it's too personal to share here, as I was praying about it, I felt like the Lord pointed out/reminded me of a couple important things that every believer can benefit from.  I was reminded of the parable, of the wise and foolish virgins, in Matthew 25: 1-13...

And at midnight a cry was heard:  "Behold, the bridegroom is coming; go out to meet him!"  Then all those virgins arose and trimmed their lamps.  And the foolish said to the wise, "Give us some of your oil, for our lamps are going out."  But the wise answered, saying, "No, lest there should not be enough for us and you; but go rather to those who sell, and buy for yourselves."  And while they went to buy, the bridegroom came, and those who were ready went in with him to the wedding; and the door was shut.

Afterward the other virgins came also, saying, "Lord, Lord, open to us!" But he answered and said, "Assuredly, I say to you, I do not know you."

Watch therefore, for you know neither the day nor the hour in which the Son of Man is coming.

In the notes, in my NKJV Bible, it states, "Possessing oil illustrates the concept of being prepared; a lack of oil represents being unprepared for Christ's return," and that the door being shut "speaks of being shut out of the kingdom."

With that, I was, also, drawn to a scripture, that I was given by an old college professor, found in Matthew 5:14.  It states, You are the light of the world.  A city that is set on a hill cannot be hidden.  And goes on to say, in verses 15 and 16, Nor do they light a lamp and put it under a basket, but on a lampstand, and it gives light to all who are in the house.  Let your light so shine before men, that they may see your good works and glorify your Father in heaven.

Again, in my Bible's notes, it states, "The believer does not have inherent light; rather we have reflective light.  As we behold the glory of the Lord, we reflect it.  Therefore, we need to make sure that nothing comes between us and the Lord's light."

I think that my dream was a picture of what God has for my future.  However, I, also, believe that He was saying to keep watch and to be ready, not only for His return, but, also, for the next step in His plan for my life.  It is truly my heart's desire to be prepared for my purposes.  So, I will do my best to...
The more saturated in Him I become, the more it will pour out of me to others.  It is so humbling to me that God would even want to use little, sin-natured, fragile me; but if He does, I'm determined to be ready for whatever it may be!

A dear friend, of my Mom's, lost her husband, just before Christmas.  Today was his memorial service, and I've been thinking about and praying for her all day.  So, today, I, also, have the card I made for her. 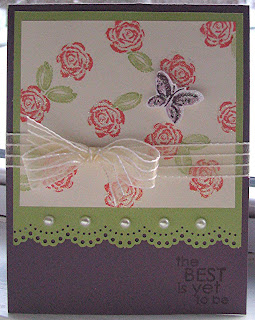 I started her card by clear embossing the "the BEST is yet to be" sentiment, in the bottom, right corner, of the Perfect Plum, cardstock, card base.  I, then, added, just above the sentiment, a piece of Certainly Celery cardstock, punched, across the bottom edge, with Marth Stewart's Doily Lace Edger punch, and a few, well-placed, Paper Studio pearls.  The final, flat layer was a piece of ivory cardstock, stamped, in Cameo Coral ink, with random, rose images which were, also, glittered.  I, then, two-step stamped a butterfly, in Perfect Plum and Pale Plum, respectively, on ivory cardstock; hand cut it out; glittered its wings; and adhered it, amidst the flowers, with a dimensional.  A Hobby Lobby, sheer, striped, ivory ribbon, tied in a bow to the left of the card face, right over the rose images, adds that perfect finishing touch you know, by now, that I love so much.
Posted by Jinny Newlin at 3:43 PM