I think that it's about time for some more papercrafty goodness around here.  So, I've got Dawn's Color Cue {3} Challenge, for you all, today. 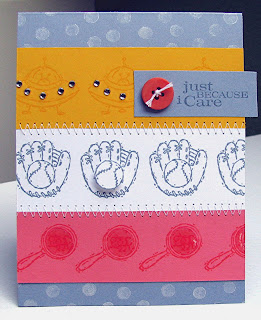 I started this card by stamping the looking glass image, several times, in Cameo Coral ink, on a strip of Cameo Coral cardstock (I wish you could see the little ant on the inside of this image better.  It was having so much difficulty photographing well.); the baseball glove image, several times, in Bordering Blue ink, on a strip of white cardstock; and the space craft image, in Summer Sun ink, on a strip of Summer Sun cardstock.  I, then, pieced each of the strips together and secured them with a white-threaded, zig-zag stitch.  Before they were adhered to the Bordering Blue, cardstock, card face, I stamped it, in Moonlight White ink, with polka dots.  I, then, added gemstones, for blinking lights, to the space craft images and Crystal Effects, for a more glass-like look, to the centers of the looking glass images.  I, also, stamped an extra, baseball glove image, in Bordering Blue ink, on white cardstock; hand cut the baseball from its center; and adhered it to the second glove, in the row, with dimensionals. 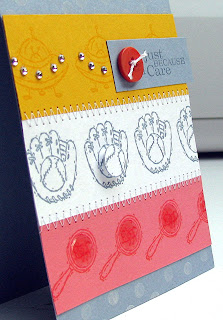 Finally, the "just BECAUSE i Care" sentiment was stamped, in Bordering Blue ink, on a piece of Bordering Blue cardstock; hung off the right side of the card face, overlapping the row of space craft images; and embellished with a coral button, laced with white string, tied in a knot.
This card is for Zach. 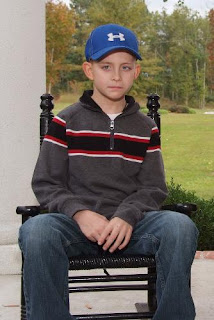 Zach is another one of Jennifer's Cards for Kids kiddos.  According to Jennifer's blog, 8-year-old Zach was diagnosed with Medulloblastoma, a form of brain cancer, on July 21, 2009.  Two days later, he had surgery to remove the tumor.   This was just the beginning of this journey for this family, but they will travel it together, faithfully.  Zach and his mom are, currently, at St. Jude Children's Hospital, in Tennessee, where he just started his chemotherapy.  They will remain there for the next few months but enjoy visits from his dad and two younger brothers, Ryan and Chase.
{Supplies & Tools}
Stamps: Toy Box, Best Yet, & Polka Dot Jumbo wheel (SU) Paper: Bordering Blue, Cameo Coral, & Summer Sun (SU); white (Georgia Pacific) Ink: Bordering Blue, Cameo Coral, & Summer Sun (SU); Moonlight White (Brilliance) Other: gemstones & coral button (Paper Studio); white thread & sewing machine; dimensionals; string; Crystal Effects
Posted by Jinny Newlin at 12:56 PM

Awe, this is a PERFECT boy card! Love all of the little details you added to really make this unique and stand out.

Thanks for playing along!

This is an amazing card, full of detail and fun. Wow, lots of detail. Everytime I look at it I see something different. I think it will put a smile on Zach's face and I admire you for sending one out.

Sooo cool! That is one awesome boy card and it is sure to make Zach smile. :)