It's been a tough week around our place.  Ezekiel has been his usual, difficult self, but we've hit rock bottom.  So, there's no place else to go but up... Right?!  Please, tell me things get better.

We, also, discovered that Adina is allergic to milk.  I've been nursing her, for three meals a day, up until last Thursday, when we began to wean her one feeding at a time.  Saturday morning, she woke up grumpy and irritable.  She, also, had a bit of a runny nose and major diarrhea.  Well, it didn't occur to me that it was the milk, because she has had no problem with other dairy products.  I just figured that she had a bug or something.  Two days went by... then, three and four...  By five days, I knew that something had to be, seriously, wrong.  That's when it struck me!  Milk!  I cannot drink milk, either, without having issues, but I've never had a problem with other dairy products.  I, immediately, got on the phone with her pediatrician, who assured me, through her nurse, that it is, completely, normal to have an allergy to milk but not other milk products.  She figured, from everything that I told her, that I had made the right diagnosis, but that we'd know, for sure, when we stopped the milk.  Well, today is day six, two days of being milk-free, and everything is fine.  My baby is no longer whiny and uncomfortable, and the diarrhea rash is nearing its end.  She has her 18-month check-up in a couple of weeks, so we'll get a chance to discuss it all with her doctor in person; but until then, soymilk has become our best friend!

Anyway, its raining now... I mean, really raining; and it feels like it's washing away all the stress of the week and giving us a new start, which is, exactly, what we need.  So, Lord, please keep the rain coming, until relief has been found.

I've got a few pictures, of my gorgeous family, to show you.  I don't sound too biased... Do I :)?  This first one is of Ezekiel ready for Crazy Hat Night, this past Sunday, at Awana Club. 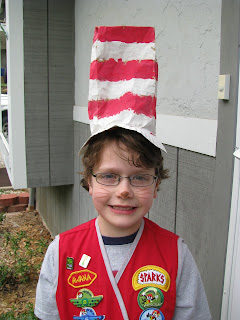 I couldn't resist penciling a little cat nose and whiskers, on his face, and he was all for it.  Hee!  He made his "Cat in the Hat" hat out of a paper, lunch sack, which he painted in red and white stripes and joined to the rim of a paper plate, from which the center had been cut.  We, then, stapled a length of elastic, long enough to go down around his chin, to both sides.  Surprisingly, it has held together super well :).

Daddy, even, joined in on the fun! 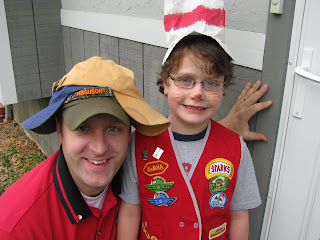 Adina, recently, decided that she didn't need a morning nap anymore.  So, I, reluctantly, obliged.  I had been hoping she'd continue it, for a few more weeks, until we were done with school.  Oh, well!  That's life!  Anyway, some mornings, while she's having a little time, to play by herself, in her room, and we're working on Arithmetic, she decides maybe a little nap wouldn't be so bad, after all. 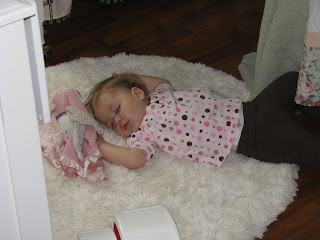 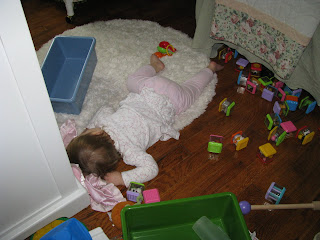 It has always been my heart for my kids to be a blessing to others, whether that be now, while they are young, or when they are grown and have a family of their own.  One way I know that they can accomplish that is by helping out.  Ezekiel has always been a super, good helper around the house.  He has made his bed since he was three-years-old.  He sweeps his bathroom floor for me, feeds the dogs, helps wash the dishes, picks out his own clothes, looks out for Adina, etc.  Well, today, he began learning to dust his own room... 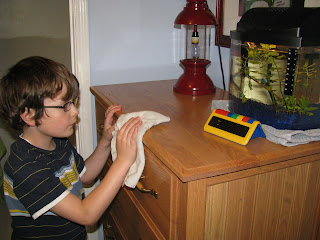 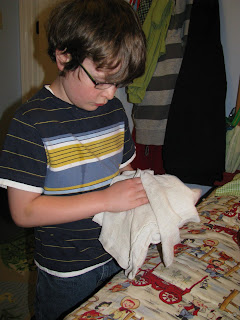 and he was, actually, excited to do so.  Now, if he can just keep that excitement and do a good job in the process, his wife will be, really, thanking me, one day :)!

Before I run start a load of laundry and get some cleaning done, I've got a sweet, little card, which I made for BJ's office crew to give to their office manager, for Administrative Professionals Day, yesterday. 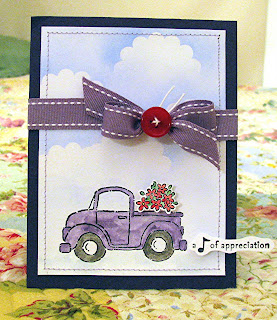 I apologize for the pictures!  I made it after dark, and I knew that BJ would be taking off with it, the next morning, before it got light again.  So, I improvised but couldn't seem to edit out all the yellowness.

I started her card with more of those fun clouds, that I described in my Wee Memories' Grab Your Umbrella Challenge post, sponged, in Bashful Blue ink, on white cardstock.  I, then, stamped the truck image, in Jet Black ink, just below them and water colored it in shades of Elegant Eggplant and Basic Black.  I, also, gave it a little Bordering Blue, water colored foundation and a bed full of Real Red, Pumpkin Pie, and Garden Green, water colored flowers.  I, then, popped another, hand cut, flower image, stamped and water colored the same as the initial image, off the card face, right over the other, with dimensionals. 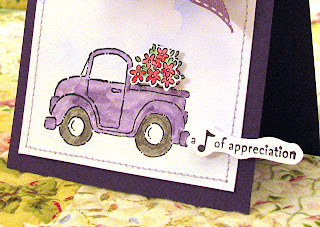 After machine stitching a purple-threaded, straight stitch around the edges of the prepped, white cardstock and adhering it to the Elegant Eggplant, card base, I gave it a little, stamped, in Jet Black ink, "a {note} of appreciation" sentiment.  It was had cut out and adhered, with dimensionals, off the right edge of the card face, to appear as if it were a puff of tail-pipe smoke.  Finally, I wrapped a Plum Pudding, saddle stitch ribbon around the card face, over the clouds and above the truck image; tied it in a bow; and dressed its center with a Pure Poppy button, laced with white string.

Well, thanks for letting me share a little, today, and have a good one!

You're kids sound lovely Jinny! I'm sure Adina will continue with her am naps...they tend to go through phases don't they? I can relate with the milk issue. I actually jumped the milk issues and skipped right to Goat milk. The nurses at the clinic were actually shocked that my kids weren't on MILK and asked me if I knew the reason's why it was recommended that children where on whole milk. I politely but very much excited to tell them "Did you know that Goat milk actually has more fat content in it than Whole Milk?" You are so lucky to have very understanding pediatrician.

Anyhow...I love the card. I love purple and your watercolouring is fantastic. I have to try that cloud technique soon.

Aww these pictures are sooo cute!! :D Glad you figured out what was wrong with Adina and now shes better, yay! :D Love your creation too, pretty!! :D hope you had a great weekend!! ps: new challenge up :)