Well, hello there!  So glad you took a minute to stop by and check out this month's For the Love of Books pick!  It was chosen in honor of the upcoming Easter holiday.  Matter of fact, since my kiddos were born, not an Easter has gone by when we haven't sat down and read the priceless message of this book together. 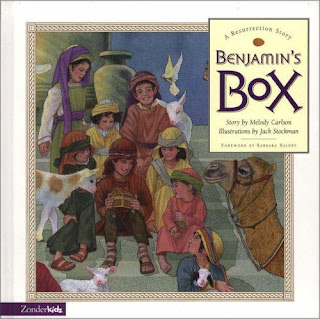 Benjamin's Box, written by Melody Carlson and illustrated by Jack Stockman, is the story of a young, hard working, honest boy, named Benjamin.  Before his grandfather passed away, he not only took Benjamin to hear Jesus teach, but also gave him a treasure box with some old straw inside, telling him that it came from the bed of a baby who was born in a stable and would, one day, grow up to be a king.  Benjamin is lucky enough to be near and hear Jesus teach, many times, throughout the course of the book, even to serve Him during what came to be called the Last Supper.  Each time he sees Jesus, he adds a new item to his box, all the while, believing Jesus is a king.  The story continues through his friend's crucifixion.  Benjamin is right by His side the entire time, helping in any and every way he knows how, even if it's just praying.  However, it isn't until Jesus rises from the dead that Benjamin realizes the true treasure his little box holds.

It also boasts a page explaining how to use Benjamin's Box with this particular style of Resurrection Eggs. 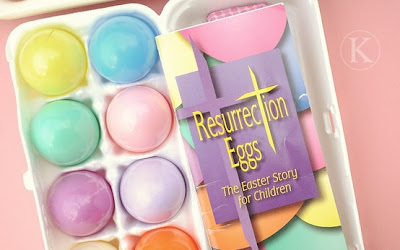 I hope this book helps you tell the true story of Christ's death, resurrection, and forgiveness for all people, to your precious, little ones, this Easter.  Thanks so much for taking the time to read!  God bless!
Posted by Jinny Newlin at 7:00 AM

Thanks so much for this book suggestion Jinny! Going to check it out!

Thanks for the book suggestion!