Hey, y'all!  I hope you all had a wonderful weekend!  So, I told you all last week that CCG240 was our last inspiration board of the month; but then, CCG241 showed up in our DT Forum.  I also repeatedly told you all that your projects, for all our April challenges, were due no later than Monday, April 29, 2013; but now I know they are due by Sunday, April 28, 2013.  So, I've decided that it would be best for me to stop guessing and just let Janet give out all the "extra" info, through Color Combos Galore, every week.  Sound good to you?  I hope so, and I apologize profusely for leading you astray.  I hope you can forgive me.  With that out of the way, how about we just get to another inspiration board?  Here's how it inspired me. 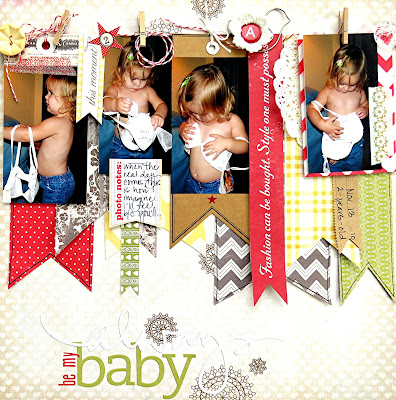 I started this layout by stamping the neutral, heart, base page, in Soft Suede ink, with the Mehndi medallion images.  I then pieced a handful of hand-cut, patterned, paper pennants, a few of which were doodled upon with a black, artist pen, horizontally, across and near the top page.  I also tucked in a perforated, kraft tag, which I labeled with Nov. 13, 2010 and 2-years-old... 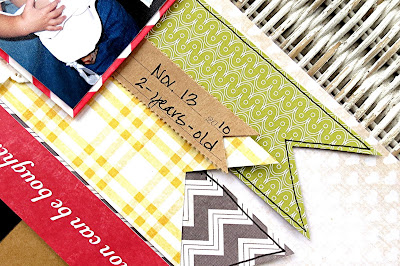 as well as a "Fashion can be bought.  Style one must possess," quote.  Both of which were hand-cut in the form of pennants. 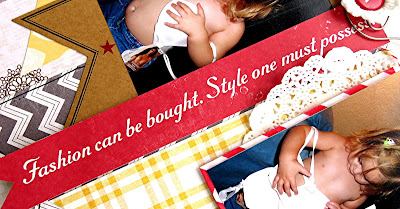 The first photo, moving from left to right, was secured to a vintage journaling card, which I punched; added a white, reinforcement label to; and laced with Baker's Twine, tied in a bow, with a length of Washi tape.  It, along with the second photo, was then adhered, in its present position, with foam tape and a mini clothespin.  A "this moment" tag, as well as a red, polka dot, "2" star, was tucked in between the two. 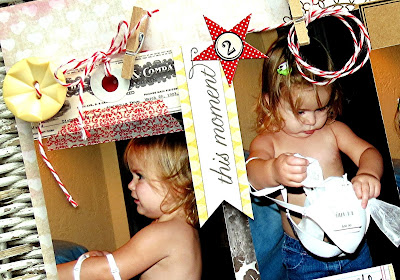 The second also had a "photo notes:" journaling tag, which reads, When the real day comes, this is how I imagine I'll feel, because you'll... stapled to its bottom edge. 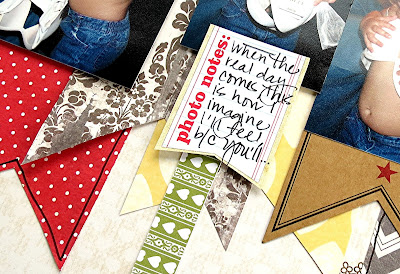 The third photo was tucked between the top and bottom of a kraft tag, whose string I tied in a bow, and secured just to the left of the quote, which was topped with a vintage, bird trinket, as well as a white, crochet flower, which I topped with a red, "A", for Adina, brad. 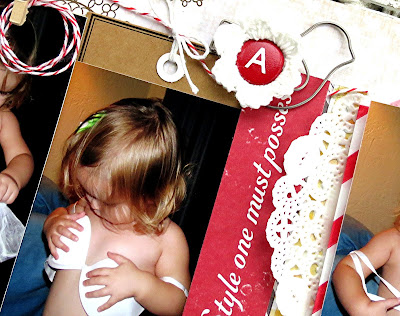 The fourth photo was backed with both a white, paper doily and a red, chevron envelope.  It was secured to the later with a length of olive, Washi tape; and it, too, was topped with a mini clothespin.  The string of pennants and photos was then secured to a length of Baker's Twine, which was anchored, at either end, with buttons. 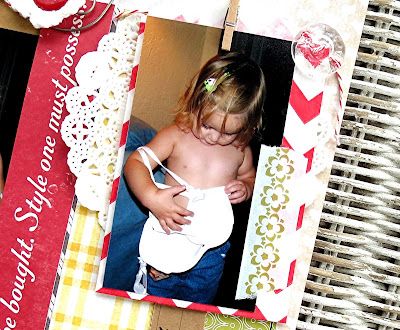 Finally, my "always be my baby" title, which also completes the journaling from above, was created from olive and red alphas and white, textured, Cameo-cut cardstock, which I also glittered. 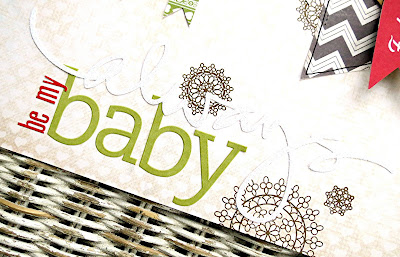 Here's this week's Inspiration Board #241 to get you started.

OMG!! I LOVE this layout!! Such a GREAT DESIGN!! I LOVE the color combo too!! =)Such AWESOME Pics!! Since my sister and I both have new little ones and are both breast feeding you forget how literal little one see things!! Its such a GEART thing to document!! My sisters daughter just turned 2 last week and we were eating at a resturant yesterday after church when Kylee and I had to feed the babies so we both slid back in the back corners of the booth and pulled out our feeding covers and Maelee says "Mommy feed baby with BIG Boobs!!" We couldn't help but laugh!! Its was a true statement and coming from the eyes of a two year old!! Moments that we forget to document, but are important all the same!! =) THANKS for sharing and have a FABULOUS WEEK!! =)

How in the world do you mix and match your papers and always always come out with such a fabulous result. Gorgeous as always my friend!

Oh my word Jinny this is precious! Love the colors, assorted banners and those pictures...too cute! Love it ;)

This is so cute Jinny!! Love those adorable photos and the mix of the pennants is really fabulous!

What a fabulous page Jinny. Love the photos of your sweet little princess! Timeless! The banner look awesome with the little embellishments!

oh my word how totally adorable... i love it...

Oh my goodness this is fabulous!! From the fabulous design stunningly executed - to the beautiful funny photos ... I always love your journalling too ... Perfect!

Just so precious and adorable! Love your mix of patterns and papers! Fab design for this wonderful layout!!!

Oh... Jinny, the photos are super cute! Love your choice of beautiful papers. Great take on this color combo. ^_^

This set of photos has me cracking up! I love how seriously she is attempting to put it on, too funny!!!! Loving the design with the clothesline, the pennants, and great choices in papers too!

This is just the sweetest thing ever, Jinny! LOVE! ;)