Morning, friends!  I trust you all are enjoying your holiday preparations.  We sure are, but before I get to that, how about a few Thanksgiving photos?  My hubby ended up working on Thursday and super early, Friday morning, just to get his required hours in for the days, and got home in time for a dinner celebration, just one day late.  Woohoo!  Oh!  And check out how full our little, Thanksgiving, Mayflower ship ended up being.  It was so fun to read all the things for which we have to be thankful. 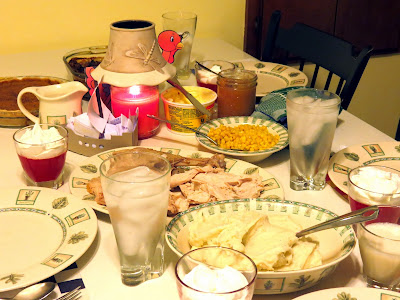 Ezekiel had to have a turkey leg.  Yuck! 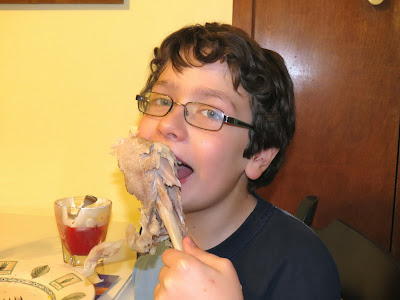 And this girl was not only loving a little, traditional, cinnamon Jell-O... 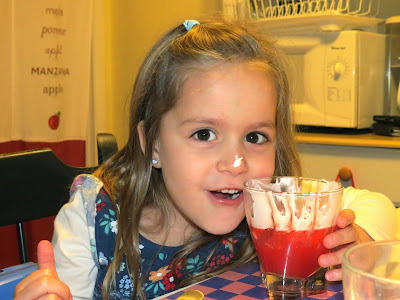 but also having her Daddy home to cuddle with. 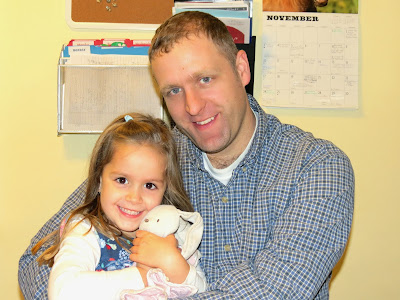 Then, last weekend, Ezekiel had his end-of-semester, Christmas concert for band. 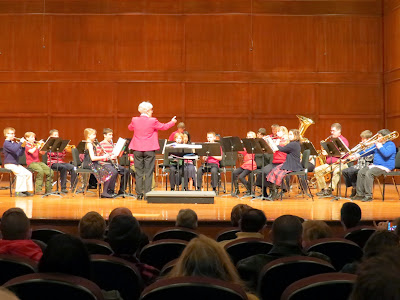 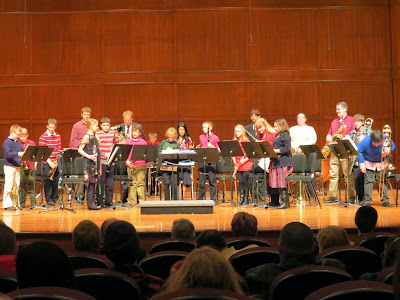 He said he was nervous, but you couldn't tell from where I was sitting; although, most of the kids did seem to be hiding behind their music stands a bit.  LOL!  He did such a fantastic job, and the whole night was extra enjoyable, especially seeing him shining in his element. 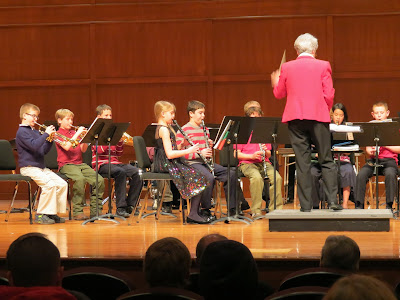 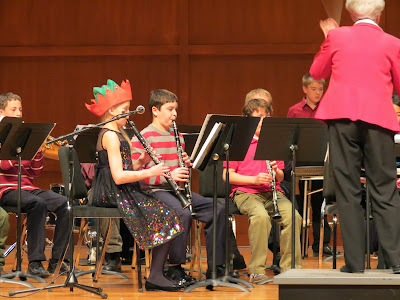 He has so loved playing the clarinet this year.  Practices at home have been a bit of a struggle, but his teacher never complained and always sang his praises.  So, evidently, he was catching on and keeping time to her satisfaction. 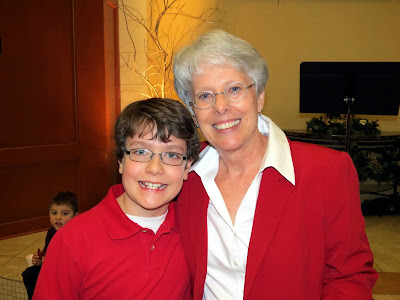 A big hug from his little sister afterwards... 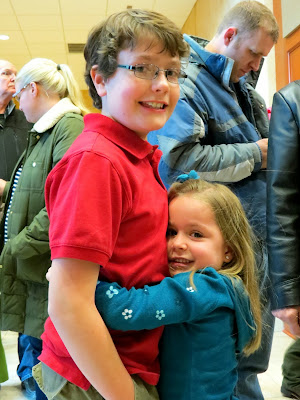 and a celebratory dinner with Grandpa and Grandma, who made the long trek to cheer him on, rounded out the evening. 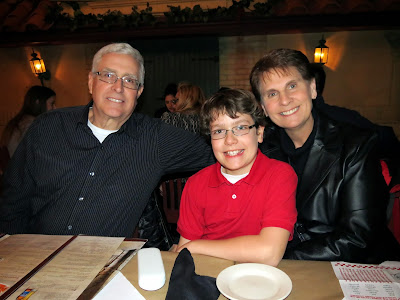 I also had to throw in this yummy pic.  I made a batch to take to the Christmas concert and a batch for us to enjoy at home.  They're one of my absolute faves! 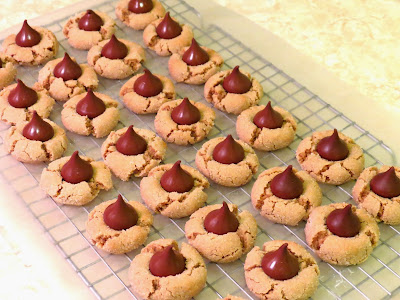 Somewhere between the concert and family pics that morning, including a few of my growing belly, which I'll be sure to share just as soon as they're available, we squeezed in a trip to the Scholastic Book Fair and picked up all these good reads, some of which we were super sneaky about and will be tucked away for Christmas, for a steal. 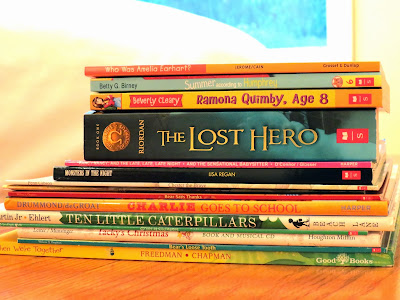 We had planned to get our Christmas tree, our first Black Hills Spruce, set up, too, but ran out of time, when the lights just weren't cooperating. 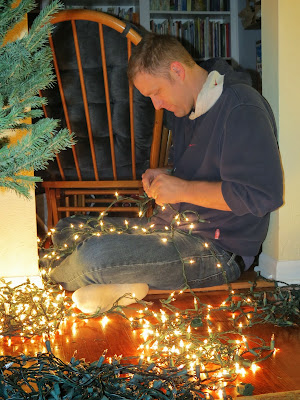 Three days later, I'm happy to say that my kiddos and I were finally able to get enough lights working to cover the tree.  Fortunately, the rest of the ornaments and bits and baubles don't require electricity and were hung without incident, including Ezekiel and Adina's new, 2013 ornaments.  Ezekiel got a little tent with a hole in the bottom to stick in a Christmas light.  It looks so cool all lit up! 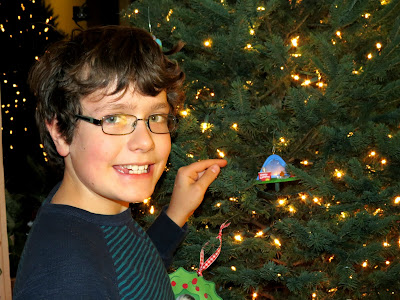 And Adina got one of an Eskimo and seal building a snowman, which totally reminded me of the snowman from the new movie Frozen.  We haven't yet seen the actual movie, but it's the same snowman from a short cartoon at the beginning of Monster's University, and you should hear how that little clip cracks this girl up.  It puts a smile on my face just thinking about it. 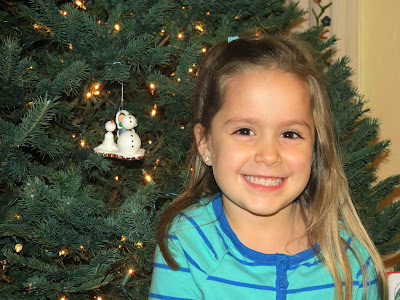 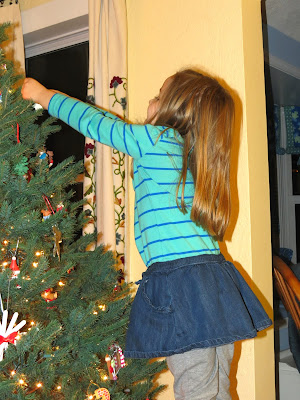 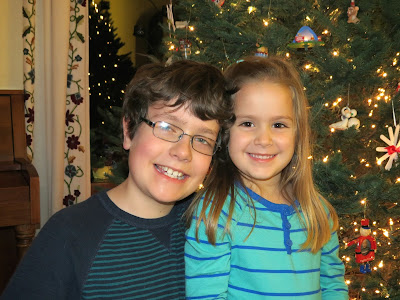 Despite all the frustrations, it really does look magical. 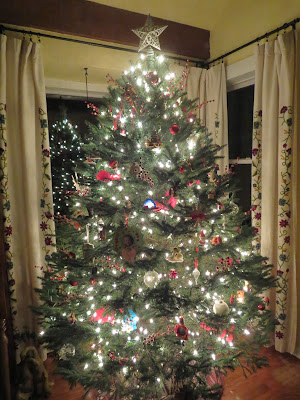 Finally, I have to apologize for being such a bad, blog friend lately.  I'm so sorry.  I'm truly trying to keep up with all your fabulous creations, but life is just steamrolling me right now.  Please forgive me and know that I'm doing my very best between balancing our everyday life with my hubby being in South Dakota and a lack of sleep from a very active, growing baby.  We're now 29 weeks, and Kaden is head down and dropped.  He's got a couple of months still to cook, but every day, it looks like he's not going to wait until then to arrive.  I guess we'll just wait and see, and I'll try to rest in the meantime.  Thanks so much for peeking in, and have a wonderful Wednesday!
Posted by Jinny Newlin at 7:00 AM

thanks for the update Jinny, glad hubby got home for his turkey dinner - it looked scrumptious. And the tree turned out really lovely. Keep cooking your little Kaden - is it now -2 months and counting? just looked at your profile.
have a great day

Great pictures! Your layout from a previous post is AMAZING! Take it easy. I've been there just last summer, and I remember how hard it was to keep up with everything :)

Awwww Jinny thanks so much for sharing your family photos with us. Your tree looks beautiful and the kiddos faces just shine with happiness!! {{hugs}}

Your family photos always leaving me smiling at my computer screen! I'm always impressed that you see the beauty in ever day and appreciate all the little things that most people just take for granted.

I love all the gorgeous pictures. Such happy smiles. Stay strong my friend! And those are my all time favorites cookies! Yummy!

aww such a sweet post.. love all the photos and no worries we all know you have a lot going on .. I just started my new job and don't have much time for blogging either.. but tonight got a chance..

Wonderful update! Don't worry about not being around blog land too much - you've got your priorities in the right place. Enjoy this special season.....there is a much more hectic one to come!

I always enjoy reading your updates. And how fun to get to go watch your son play his clarinet. Those are times you will always remember. I know I do... Your tree looks so pretty. Don't worry about not being around and take care yourself. It is such a hectic time of year..

So glad you're all doing well...looks like a delicious turkey dinner. The turkey leg photo is hilarious! Gorgeous Christmas tree too...we got ours done the other day.

Great photos!! Those guys are growing up fast ...

I'm so sorry that you didn't get the family time you wanted at Thanksgiving. Your tree looks amazing. Take care of yourself my friend. :-) Hugs!