Happy Friday, friends!  I know it's been quiet around here this week.  I've been super busy... just... with everything.  Eleven seems to be a really difficult age for my big kiddo.  His pediatrician confirmed that it was for both of her boys, too, and is so for many young boys in general, which didn't give me an ounce of comfort.  I have no idea what I'm doing.  I've never been a parent to an eleven-year-old; and I know that this may come as a shock to you, but I've never been a boy.  LOL!

All kidding aside, it takes all I've got to want to walk into the kitchen in the morning.  I'd much rather just let him do his thing and keep my distance.  He's so moody and changes personalities on a dime.  Everything seems to be a trigger.  I know that much of it is due to the onset of puberty, but friends, I can't help but wonder if this is what life has in store for us all.  There, no doubt, have been a lot of prayers sent heavenward for help; especially since everyone, that I ask for advice, looks at me like I'm insane and blows me off with a "He's such a good boy."  Don't get me wrong.  I'm so glad that he is when we're in public.  I don't think I could handle it if he weren't.  I'm already on the brink with it happening solely behind closed doors, but I could really use some honest-to-goodness, tried-and-true, solid ideas.

The other side of it all is that I've got two other beautiful babies to care for, and the last thing I want to do is drag them into this mess.  Unfortunately, they're right in the middle of it.  Fortunately, they seem to be no worse for the wear and are so good at bringing back my smile. 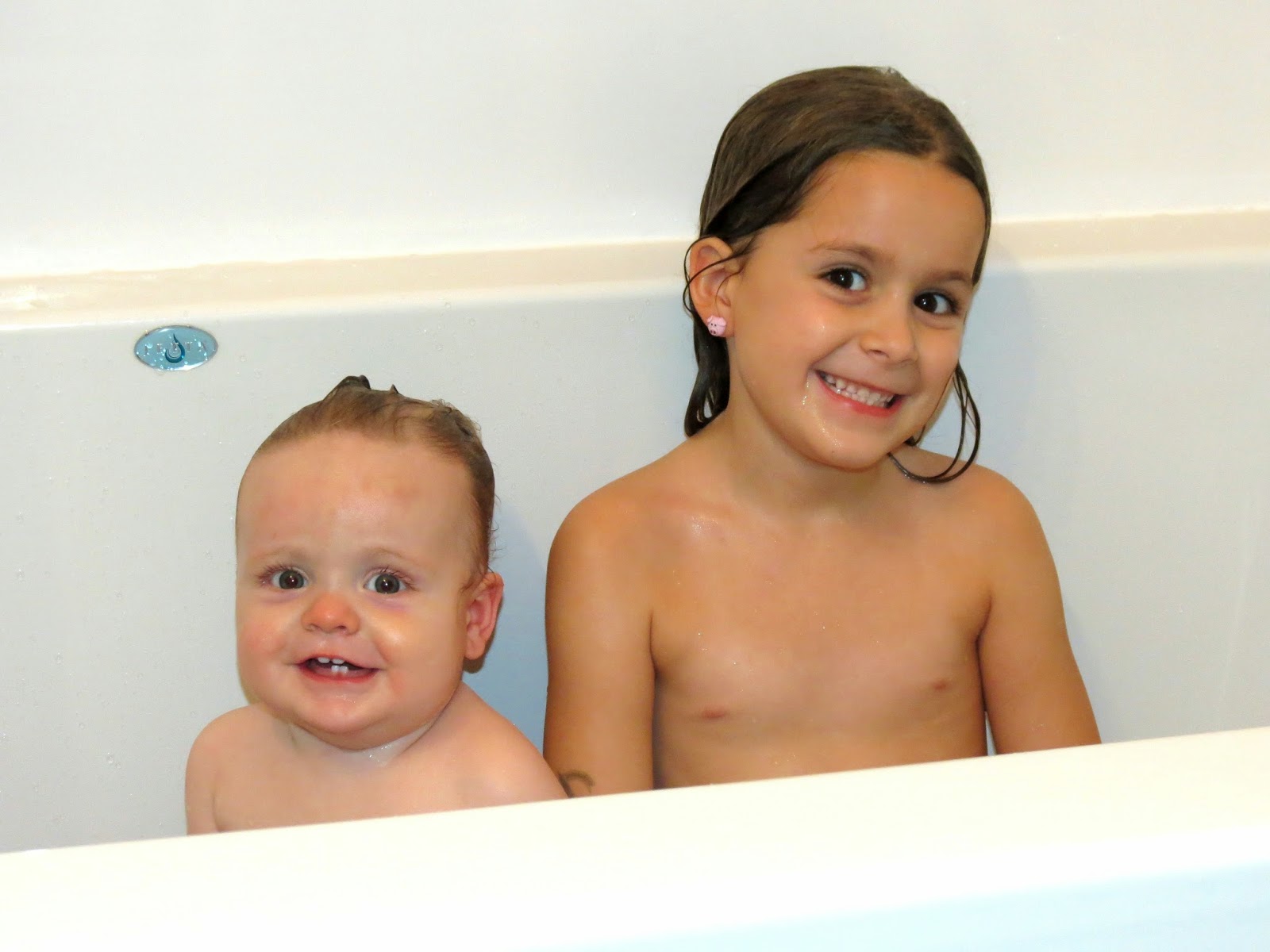 Kaden turned nine-months-old on the 2nd and is crawling all over the place, which means I now have another little shadow.  We just moved his crib down to the lowest level, as he's been pulling himself up to his knees for quite some time and begun doing the same to both feet.  He's so good at just going with the flow.  I think you have to be when you're the third kid.  Sometimes, with all the activities going on, he just has to sleep when he can.  Fortunately, we're pretty good about making sure he gets his nearly twelve hours through the night.  It's those daytime naps that sometimes have to suffer.  His favorite toy, right now, is a big bowl of plastic veggies from our play kitchen.  He leaves them all over the place and topples the bowl every time anyone tries to consolidate them back to their home.  I just love that something so simple can make him so happy. 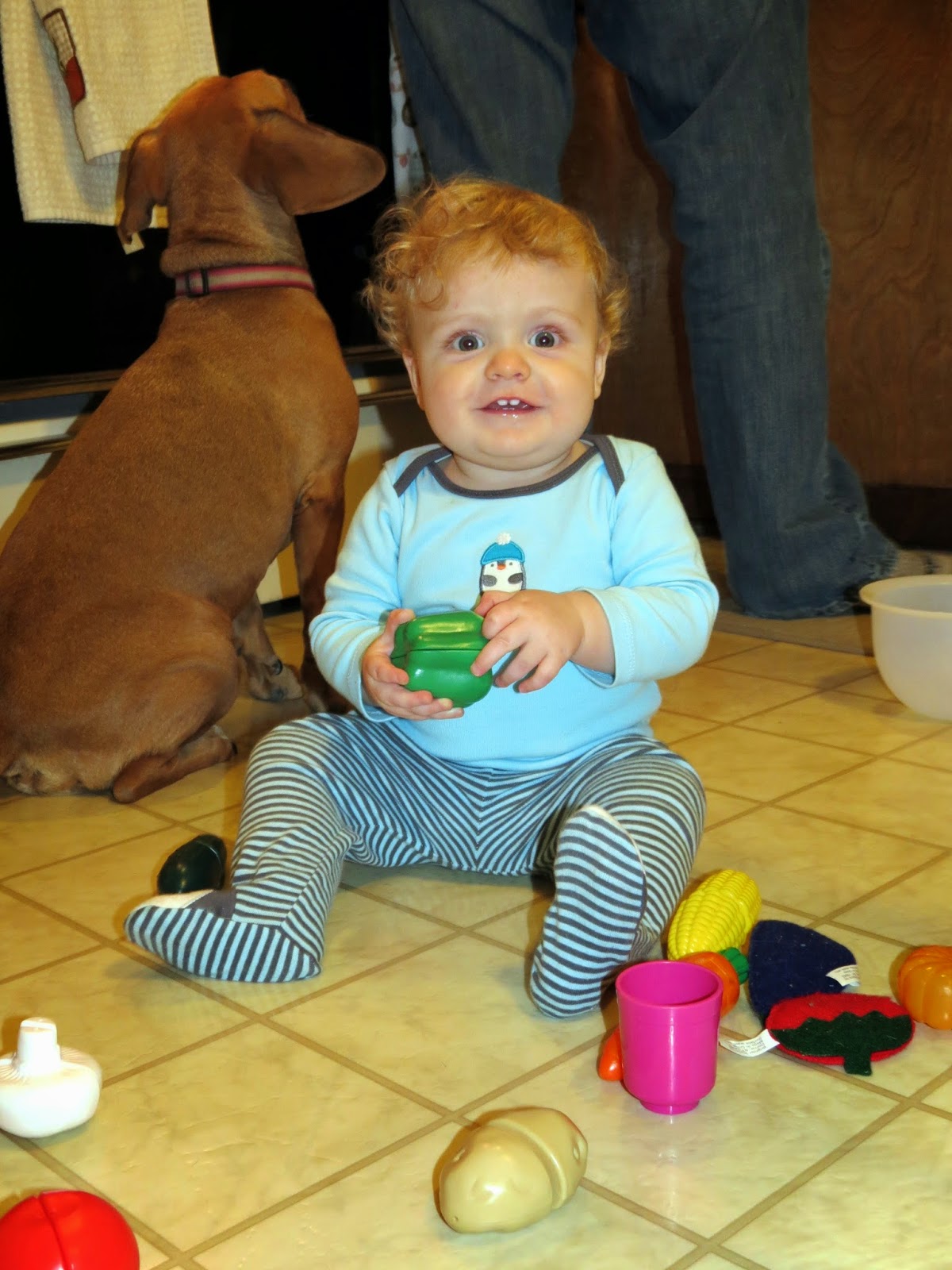 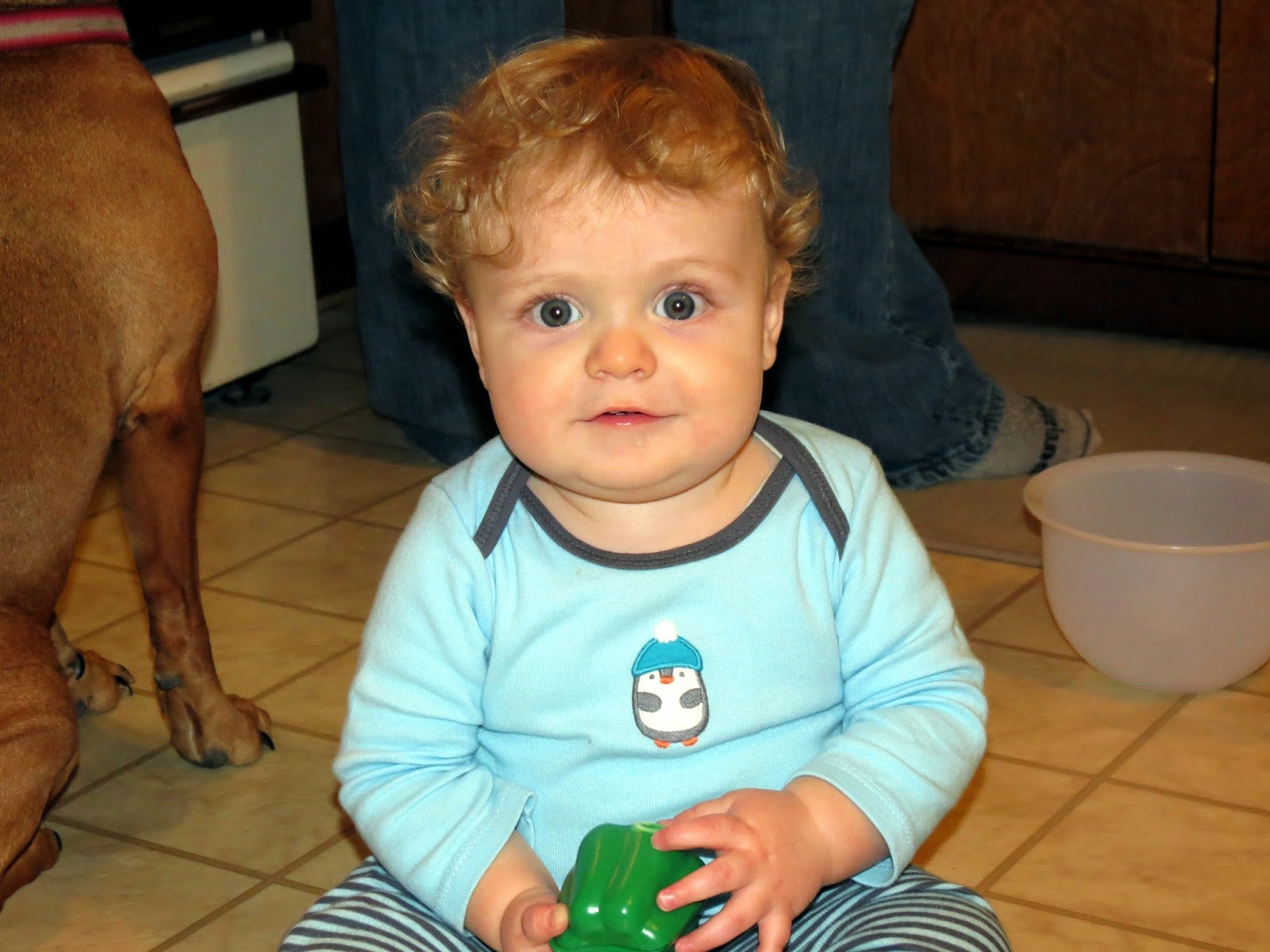 Oreo has settled into her new home with ease, and Adina, who is now begging for a kitten, too, just loves her to bits.  Last night, in the tub, Adina said that her wish for Thanksgiving was to get a new kitten, and it could come true, because wishes really do come true, like in Cinderella.  SO FUNNY!  But no, we are NOT getting a kitten.  We're already busting at the seams in our little home.  Not to mention, I know exactly who would be the one to take care of it, and I simply don't have a minute to spare.  Fortunately, her daddy is allergic.  So, it's easy to say no; but if she were to go asking him, I think we'd have a Thanksgiving kitten on our front step.  He'd just pump the allergy pills for the foreseeable future.  He's such a sucker for those big, brown eyes. 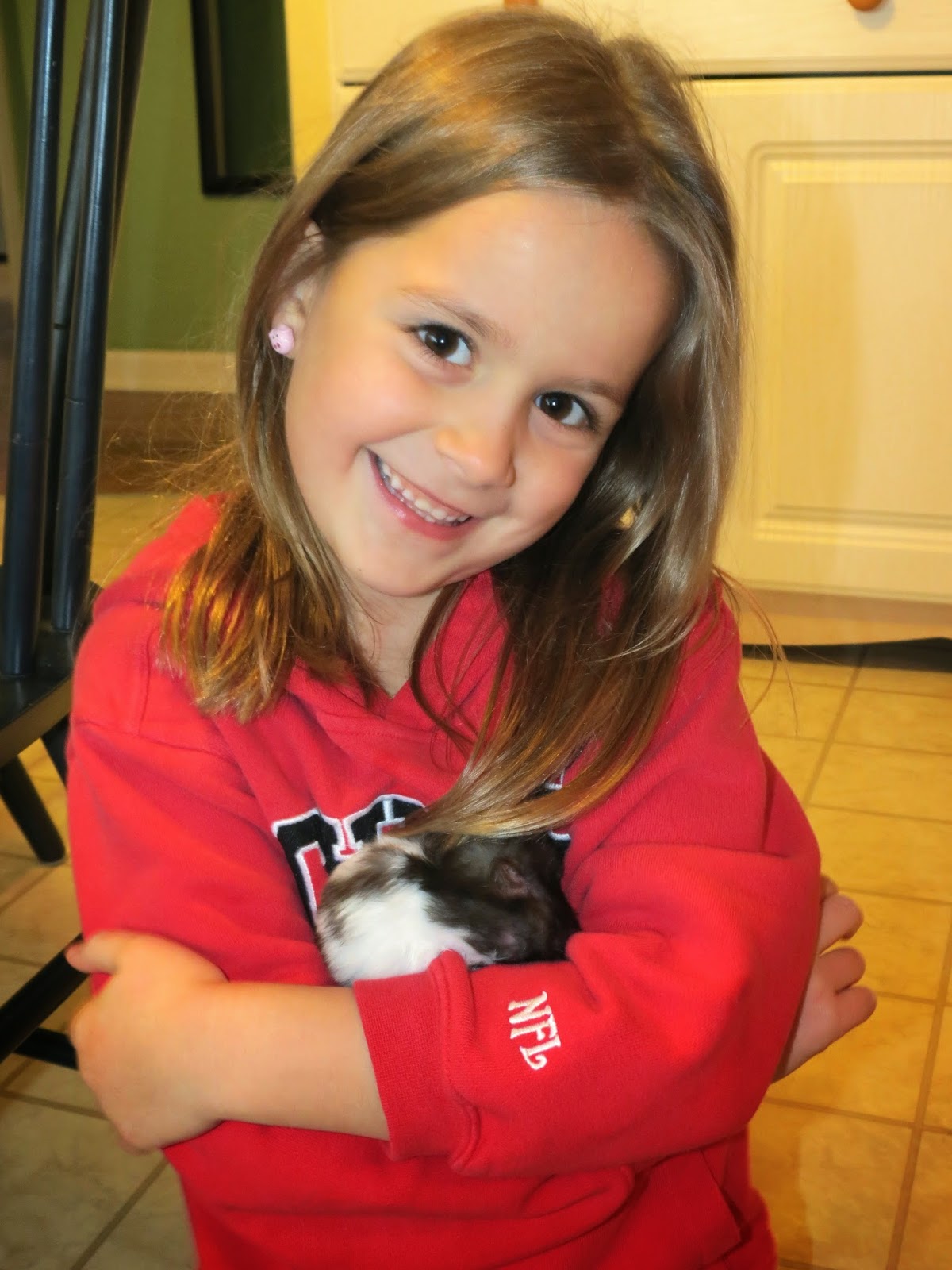 She's also been working hard at her studies.  She's loving learning to write in cursive.  I taught her so much kindergarten material last year in preschool that I thought learning it would give her something new and different to look forward to.  I love how that has worked out so well, especially because she still seems quite a bit ahead of her online kindergarten class.  Fortunately, I've got lots of other things up my sleeves to make sure that she doesn't get bored. 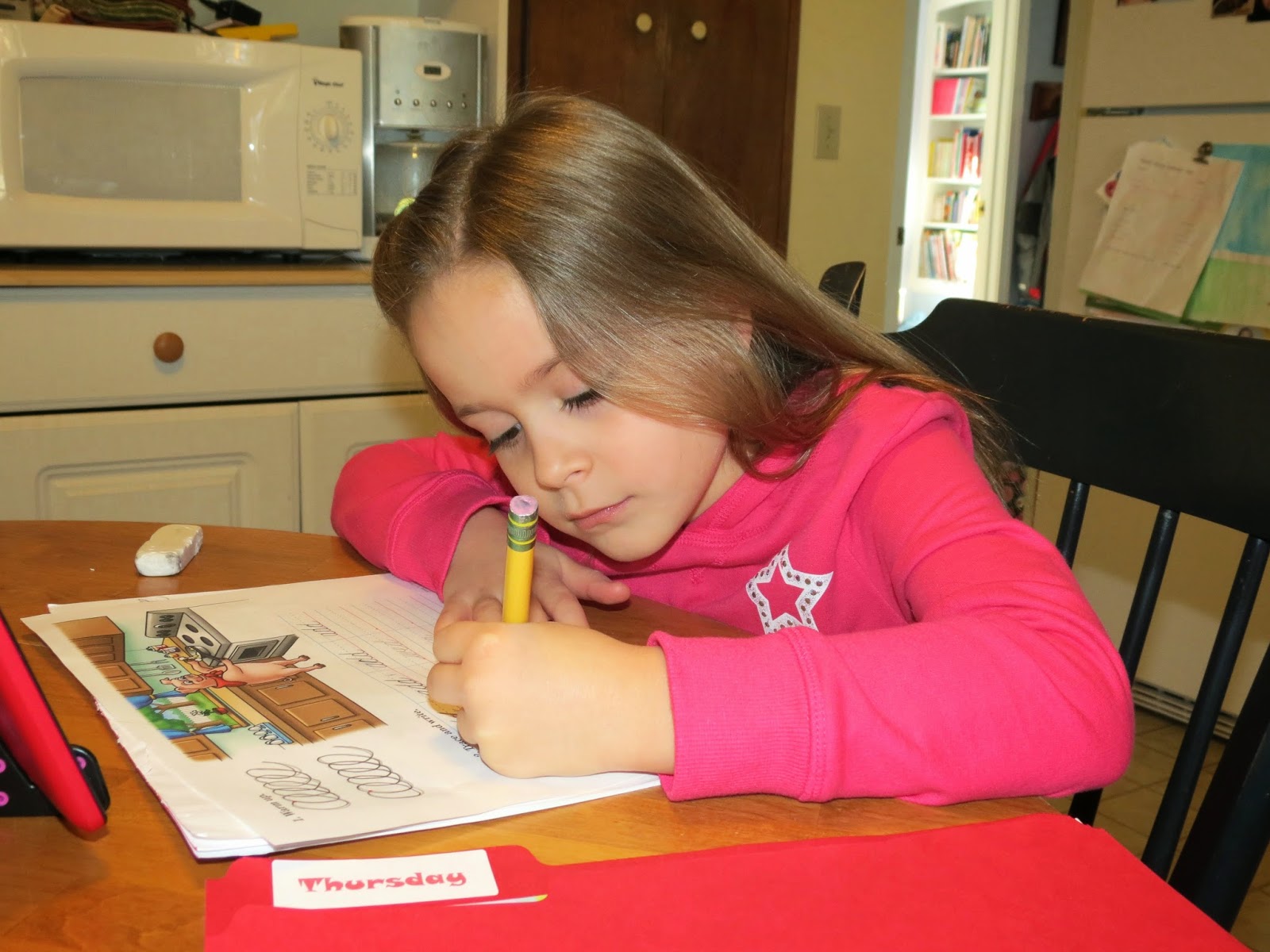 I got another PINCHme box.  It contained a sample each of Manitoba Harvest Hemp Hearts and American Crew Power Cleanser Style Remover.  The Hemp Hearts tasted a lot like sunflower seeds, but I liked the texture lots more.  They were delicious sprinkled on our dinner salads, and the Power Cleanser was just that.  I shouldn't have added it to my cart, as none of the members of my family use much product in their hair and always feel as though these types of cleansers strip and damage our hair.  This sample was no different. 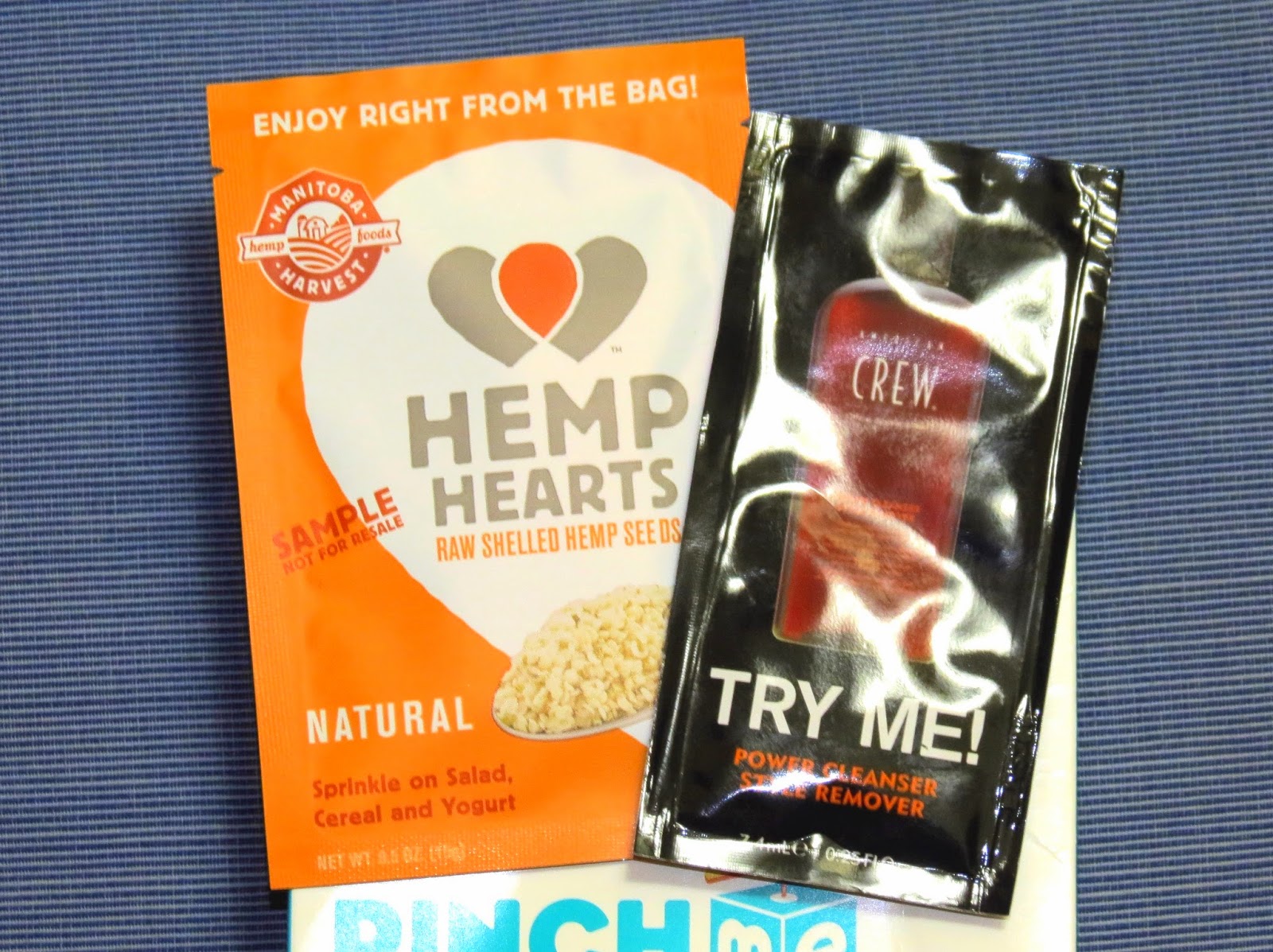 And before I run, I've got a few pics to share of our trip, to Lawrence, to visit my aunt and uncle and grandpa a couple of weekends back. 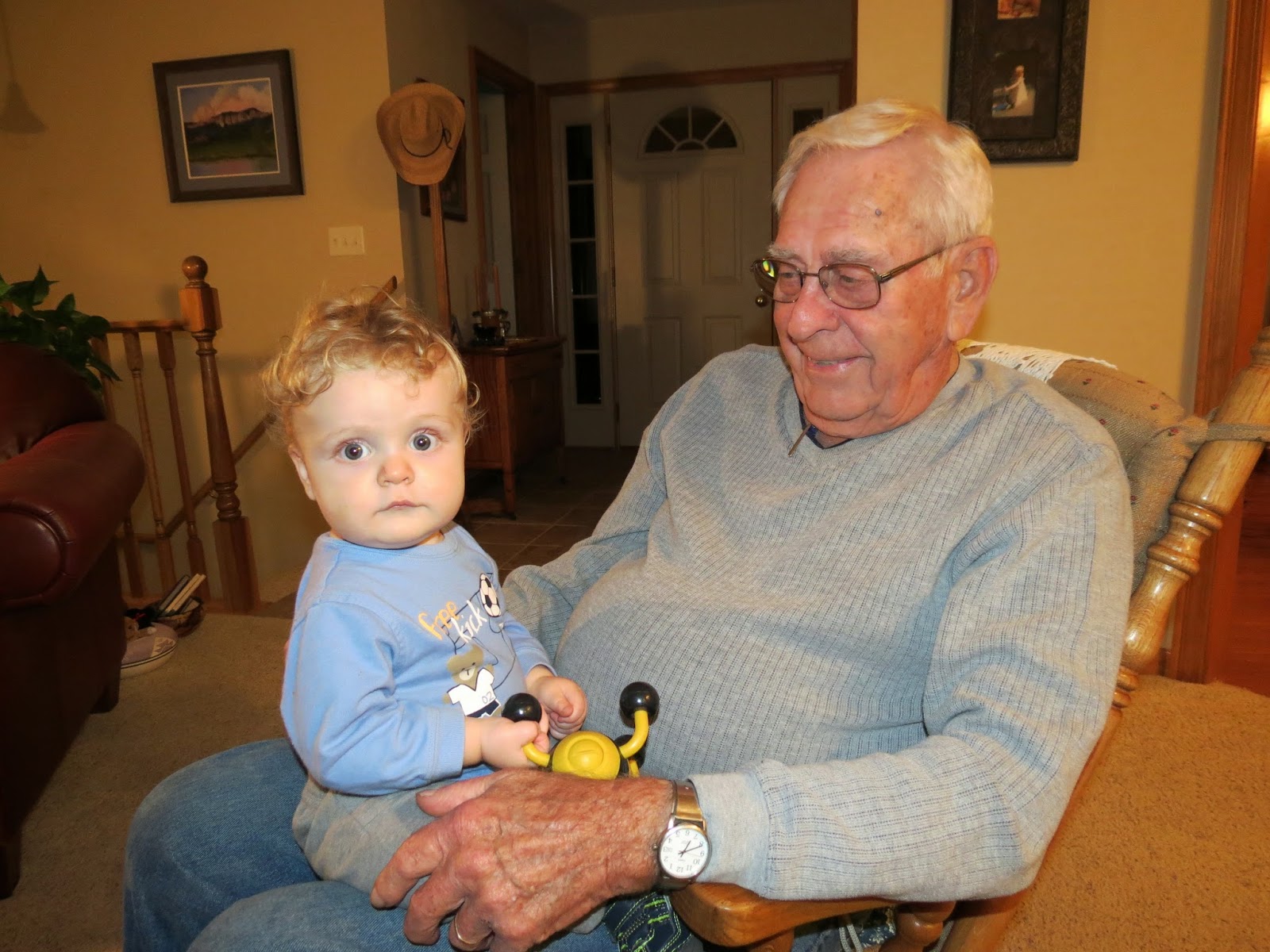 We were surprised that my cousin and his family were there, when we arrived, too.  You may remember him and his wife from their wedding back here.  It was extra fun to get to see them, because their son was born 44 minutes (Really!) before Kaden, and we hadn't had the opportunity to meet him yet. 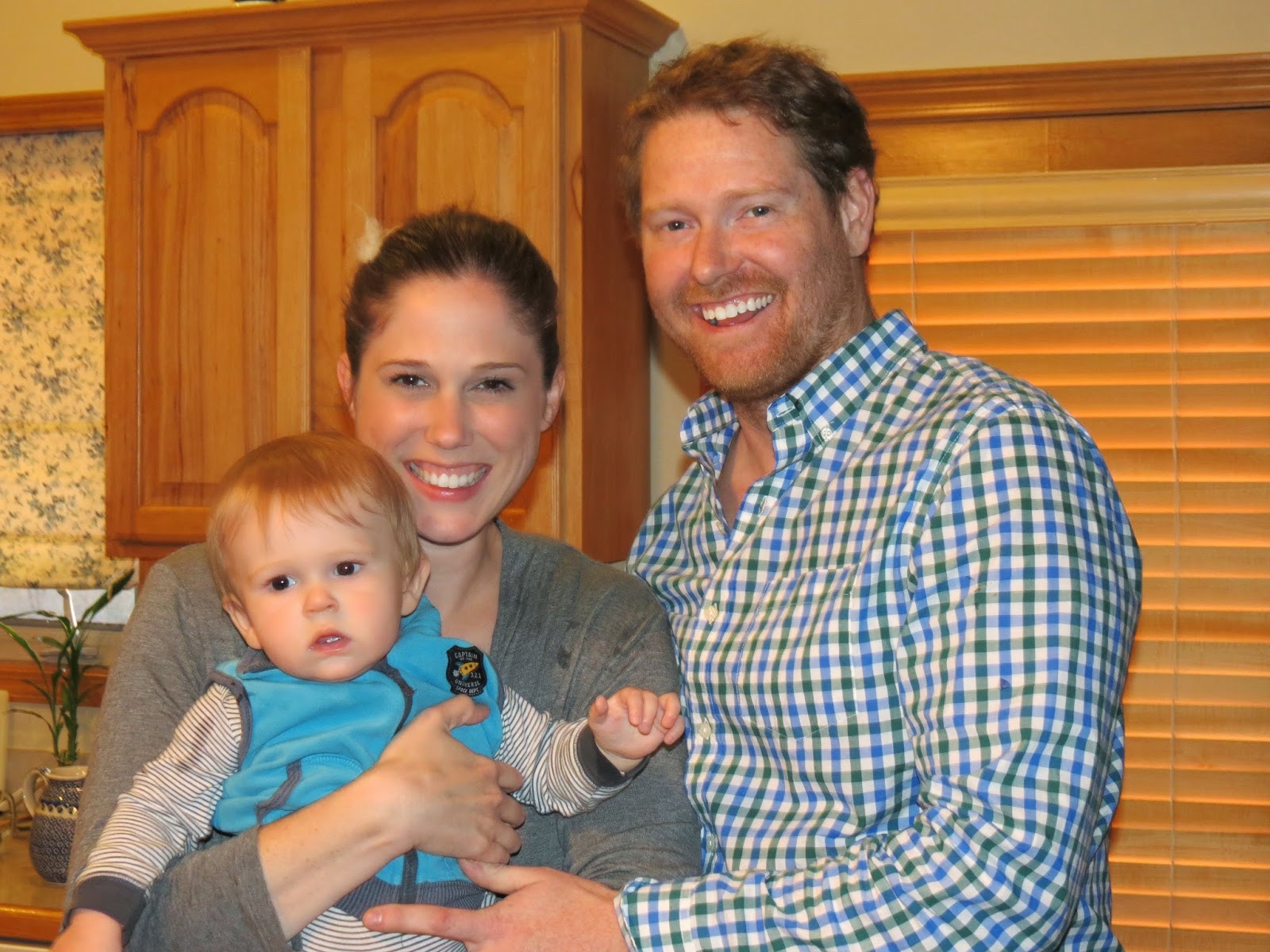 He and Kaden played happily alongside one another... 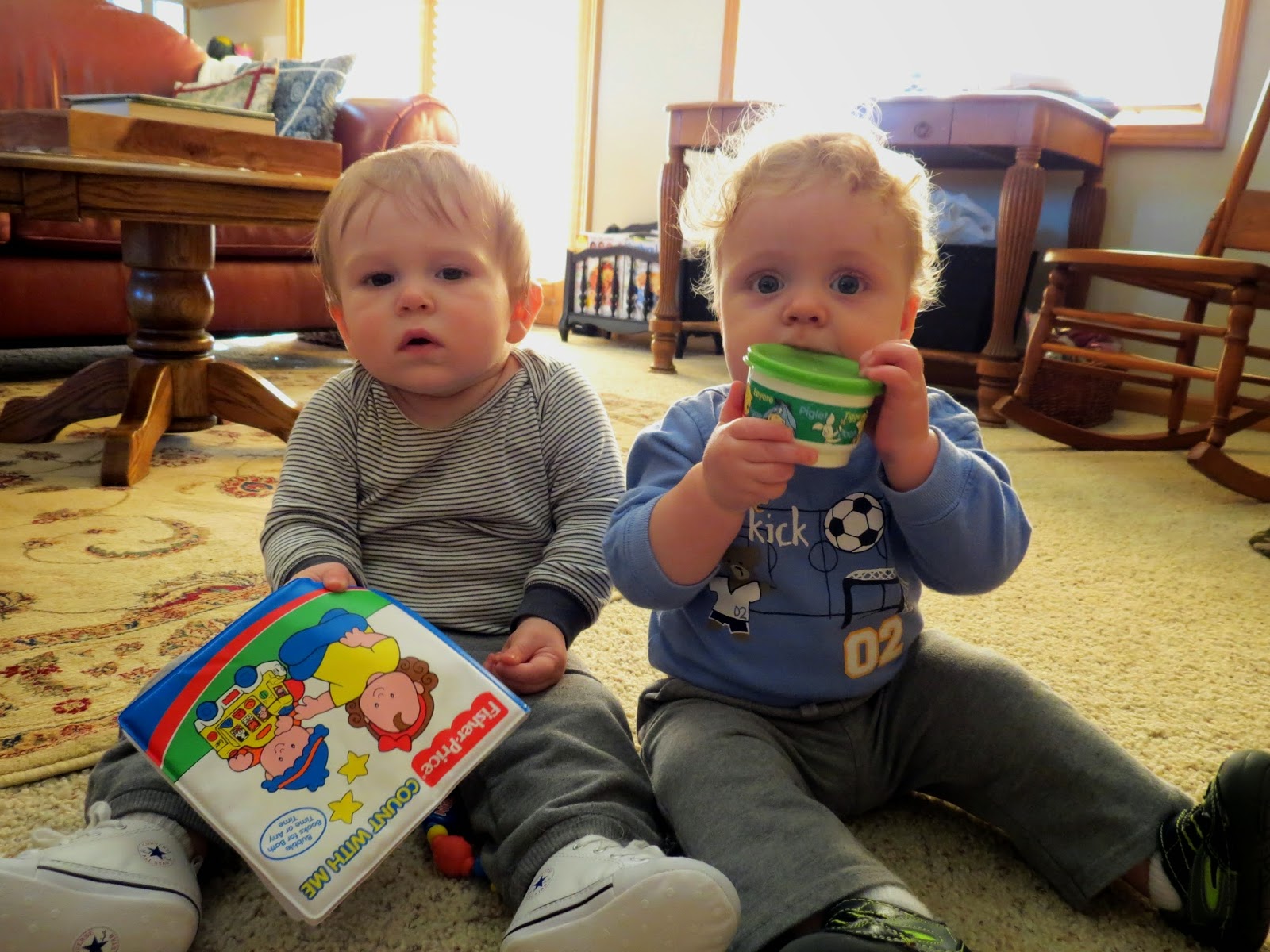 and Marty didn't fuss when Kaden pulled his ear... 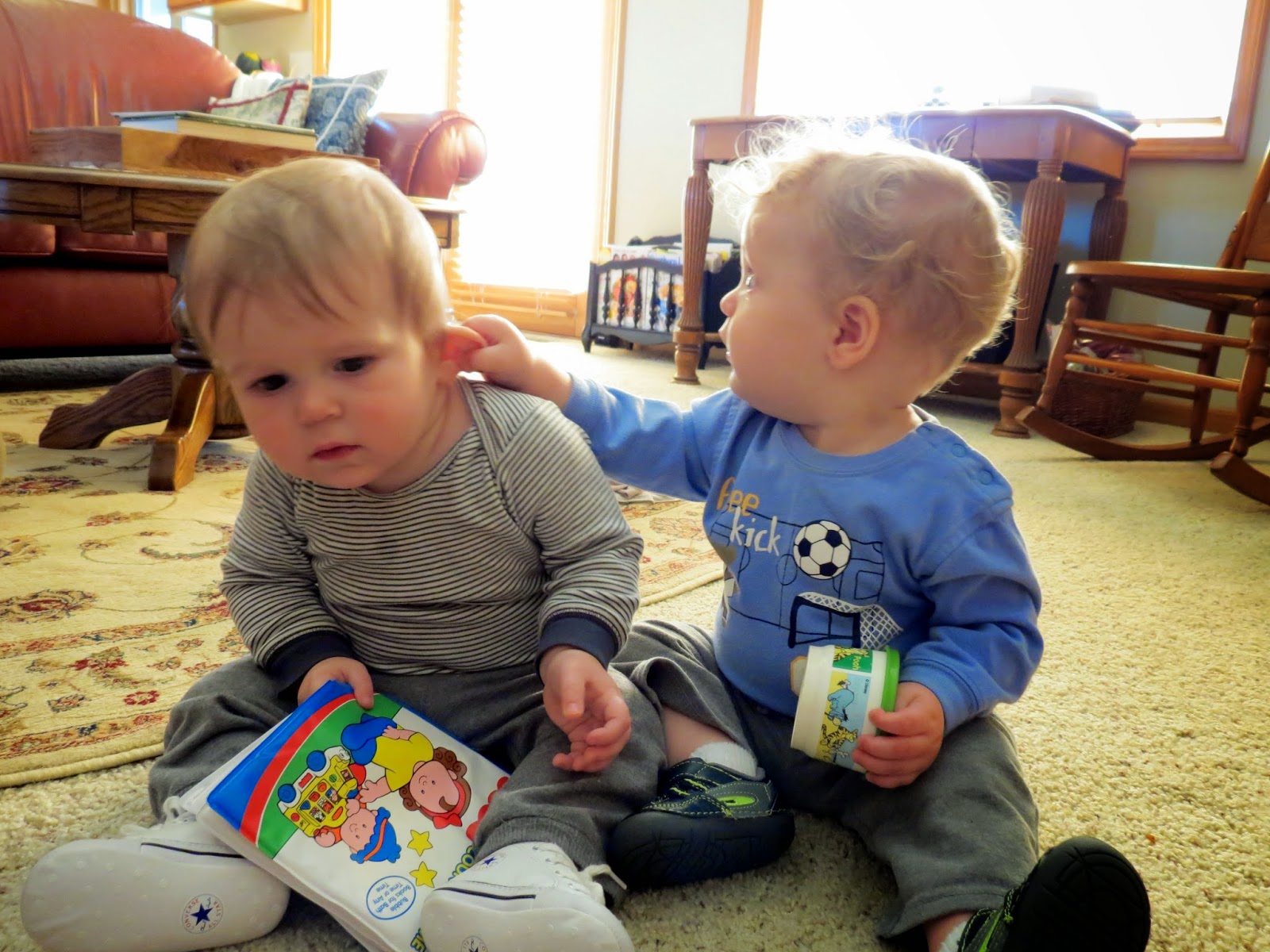 and Kaden just held on tight when Marty tried to steal his Cheerios.  LOL!  They're going to be such good friends. 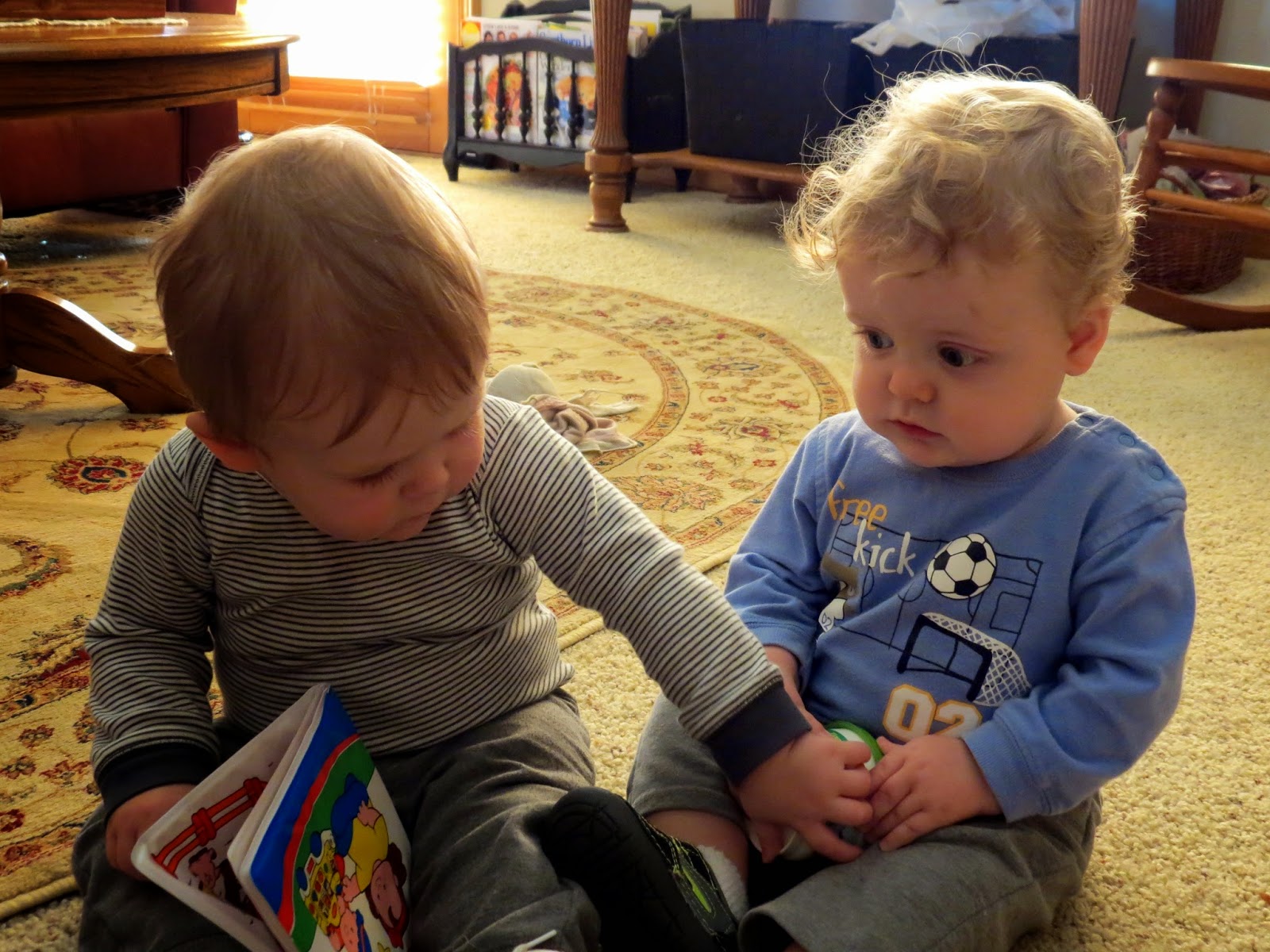 My aunt and uncle fixed an amazing dinner in their pizza oven, which was right up our alley (We love pizza!), and entertained my big kiddos with books and feeding the chickens and riding on the four-wheeler and everything in between.  We had such a great visit! 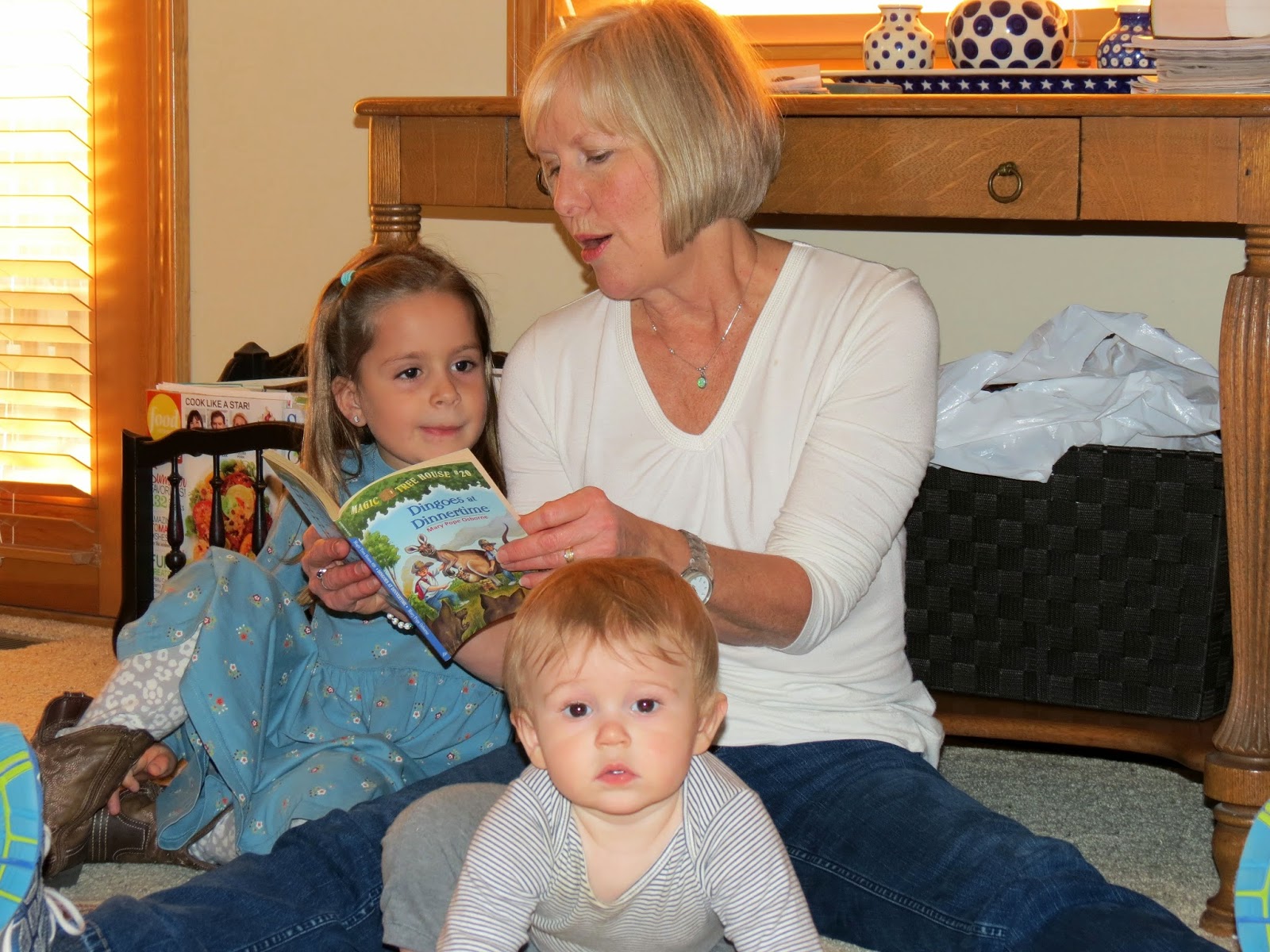 Well, that sums up a few of the highs and lows.  Thanks so much for taking time out of your busy schedules to check in on us!  Have a great weekend!  XOXO
Posted by Jinny Newlin at 7:00 AM

Loving the photos and the baby cousins are sooooo cute! I can't believe they are only 44 mins apart!!! They are like "twin" cousins!!!!!!!

So sorry to hear things are rough right now Jinny. Those puberty issues can be a real wind ding! The advice I always give is to NEVER try to be a friend. They will have MANY friends in their lives but only ONE mom and dad. I will send up some extra prayers. Sweet pictures of the two youngest in your family, love the little cousins shots!

Wish I had some advice for you but...no boys here. :-( Just trust in God cause He's the best source of help. Thanks for sharing all your fun adventures. Hugs!

Yes, sorry to hear about the parenting issues. We went through it with our son and continue to do so at times at the age of 27...lol! I think what helped was was being firm and consistent and not going on and on with them like they want you to. I mean just state it in a short sentence and be firm. And, believe me they listen more and you realize and love you more than you realize, but they just won't admit it...lol! They are just learning to be independent, which is a good thing.:-) So, I'll keep you in thought and prayer! Your photos of the kids are just darling as always! Take care and Happy Thanksgiving to you and family, hugs!:-)

Hang in there with Ezekiel! I'm not looking forward to that age, I've heard girls are worse though, so I guess enjoy it while you can? I know that consistent love and discipline will see you through!

Oh gosh I don't envy you at all. I know EXACTLY what you're going thru. It's hell on earth for a long while and boy can I remember not wanting to go out to the kitchen. Lol puberty is tough for our formerly sweet little boys. Things are happening to their bodies that's a tad scary for them too. We are Christians too and I think that makes their struggle even worse. Now that my 24 year old son and I are talking again (lol) he's been quite open with me about those horrid years. He struggled with guilt over sexual thought he had and the wet dreMs he was experiencing. Lordy I hope this isn't tooooo honest for your readers, but it's a life fact. They want to stay our "babies" but the hormones are pushing them to be "men". Our son said it was such an inner battle. He was growing hair, which he really liked, but then he still wanted to cuddle which seemed kinda wrong to him now. Verry frustrating for him. The transition is difficult more mental than anything. They want to be men physically but their minds also tell them they want their mommas. Our son wanted to push me around...flex his soon to be man muscles... But you have to stay firm. Giving them a little more freedom to spread their wings is good too. Just realize that for now, you ain't gonna be liked very much!!! But they WILL come back to your loving arms eventually when they become their own man. It takes a while but just keep lovin him regardless. Cutting apron strings hurts like hell. Lol

Forgot to say too that letting him make more of his own decisions is a must. If he doesn't wanna eat, don't make him. Let him wear stupid clothes that don't match. Lol it's all about them wanting to be their own man. Eleven sounds young but it really isn't. We let our son grow his wings when his other Christian friends mothers kept holding them tight to their breasts. We saw a big difference in the maturity levels between our don snd his friends. Yes I should get the mother of the year award....NOT!! Lol good luck. This too shall pass.

Oh the things to look forward to!! HA! Reese is only 5, so I don't have first hand experience with an 11 year old boy, but our friends went through the same exact thing with their son. Just hang in there Jinny!!