Happy Wednesday, folks!  I'm thinking it's about time for another Family Update post, especially seeing as it's been nearly a month, with the exception of Holiday Snapshots, since my last one.  I've also had two sick kiddos around my house, so my creative time has been limited ;).  I realize that Christmas is already over, but I never shared a pic of our house lights and wanted to start there, as even though it's a simple look, my hubby worked really hard to get it all ready for the holidays. 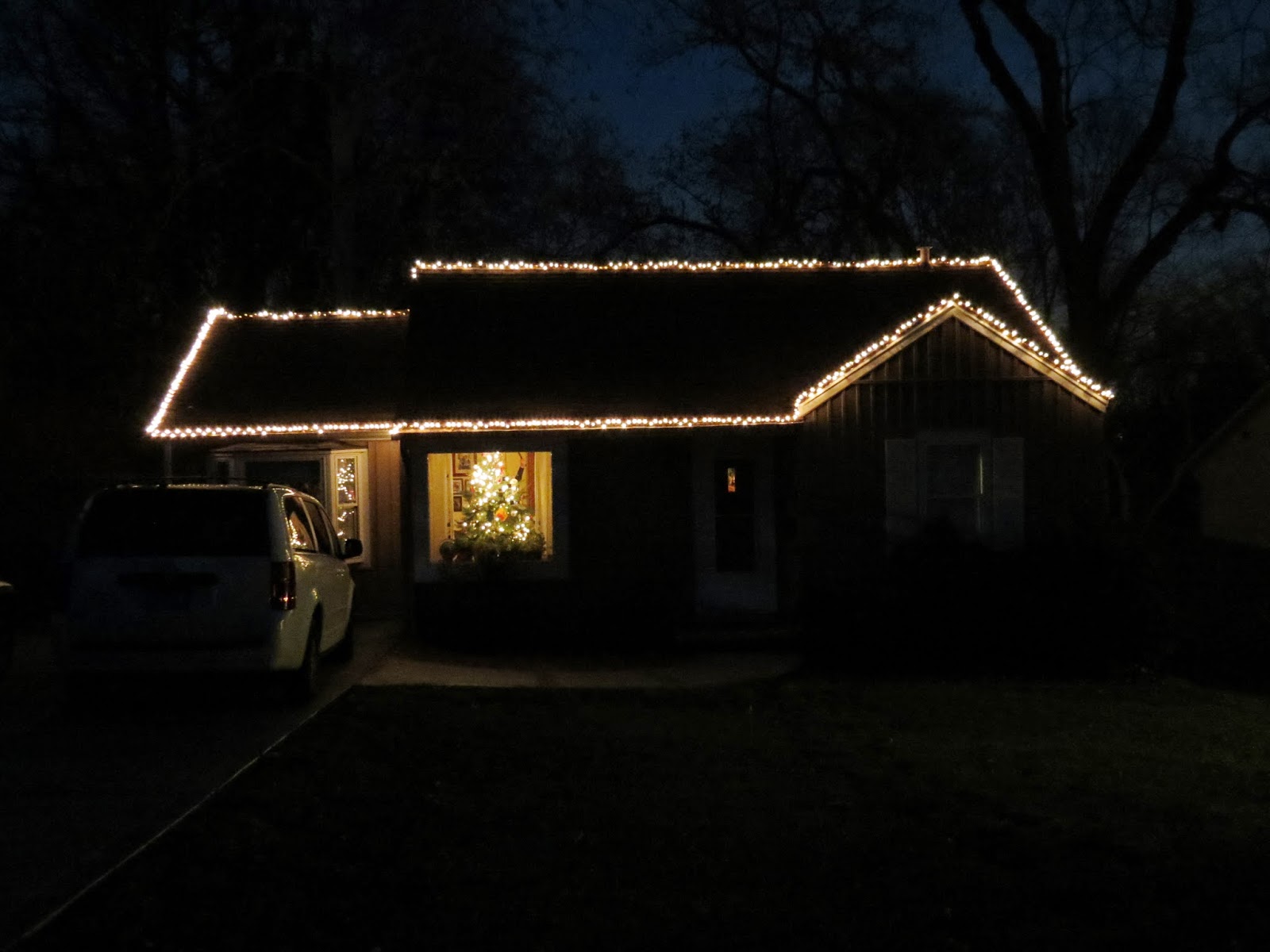 It was my job to get these in the mail... 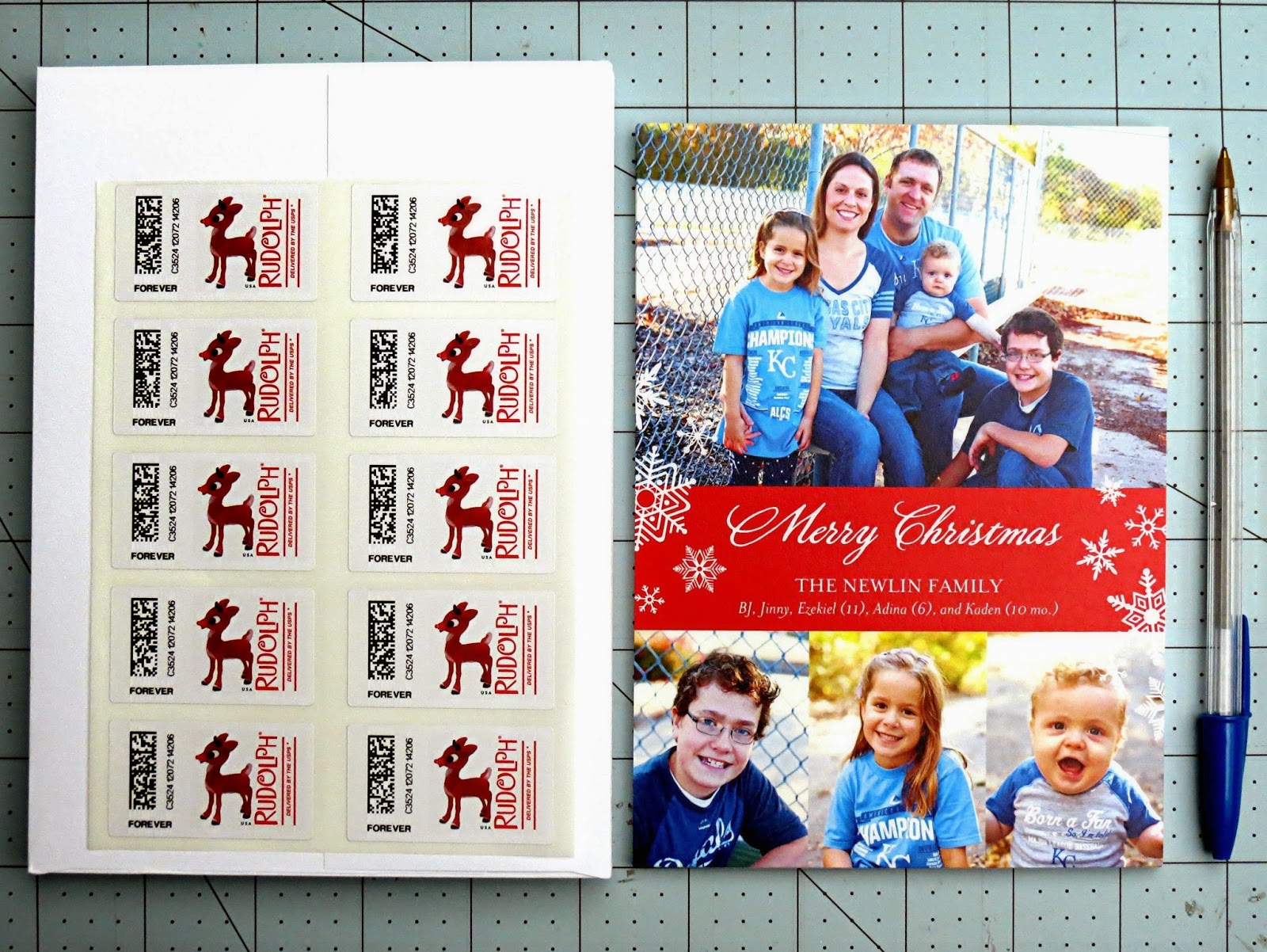 while balancing keeping this kiddo, who is now crawling up the stairs but hasn't yet mastered the art of coming down, out of trouble. 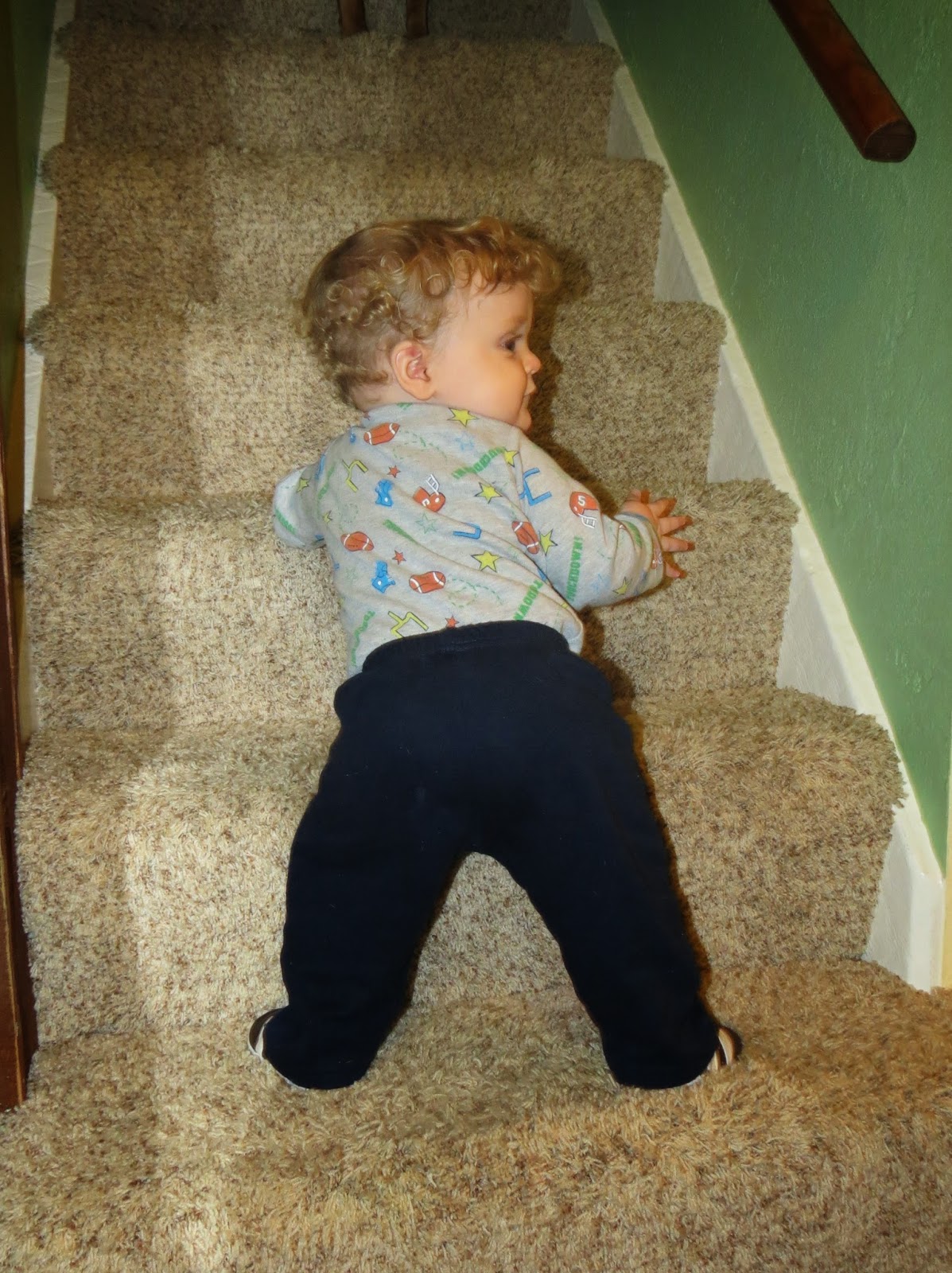 He is so loved and just under a month from turning one-year-old.  Where has the time gone?!  His first word was fittingly "up", especially since he always wants to be held.  He is also saying "dada", "hi" to literally EVERYONE, including dogs, and what sounds like "all done" to go with his baby sign for such.  He signs "more" as well and is learning "thank you" and "please".  He waves hello and goodbye and is always on the go.  He is lightning fast on his hands and knees and shimmies along on his feet while holding furniture.  It is so fun to watch him play.  He got a number of new toys for Christmas and loves them all.  He also loves playing in our little kitchen, which we moved into our actual kitchen, while I'm getting dinner ready or sometimes while the rest of us are eating and he's already scarfed down his own meal.  He's still not picky about any new food we give him, but he really loves breads and sweets, which he gets only on special occasions.  He is still nursing four times a day and is such a good little sleeper, getting two minimum of hour-and-a-half naps a day and almost twelve hours at night.  I know I'm totally biased, but isn't he just the cutest thing ever?  You don't have to answer that.  LOL! 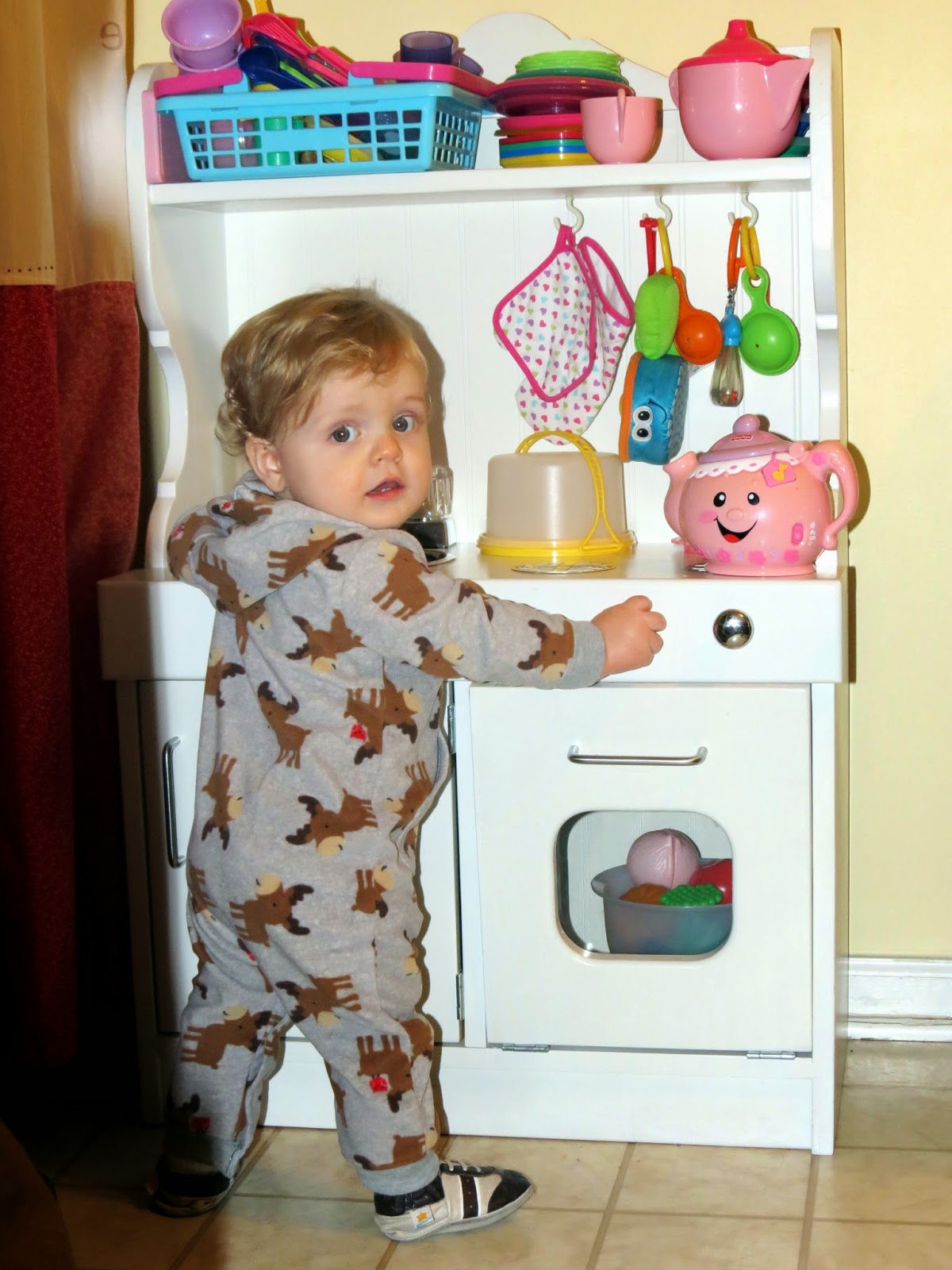 We got quite a bit of snow the week before Christmas, but it was much warmer then than it is now.  So, it was a mucky, muddy mess the very next day but not before Adina got out to play in it. 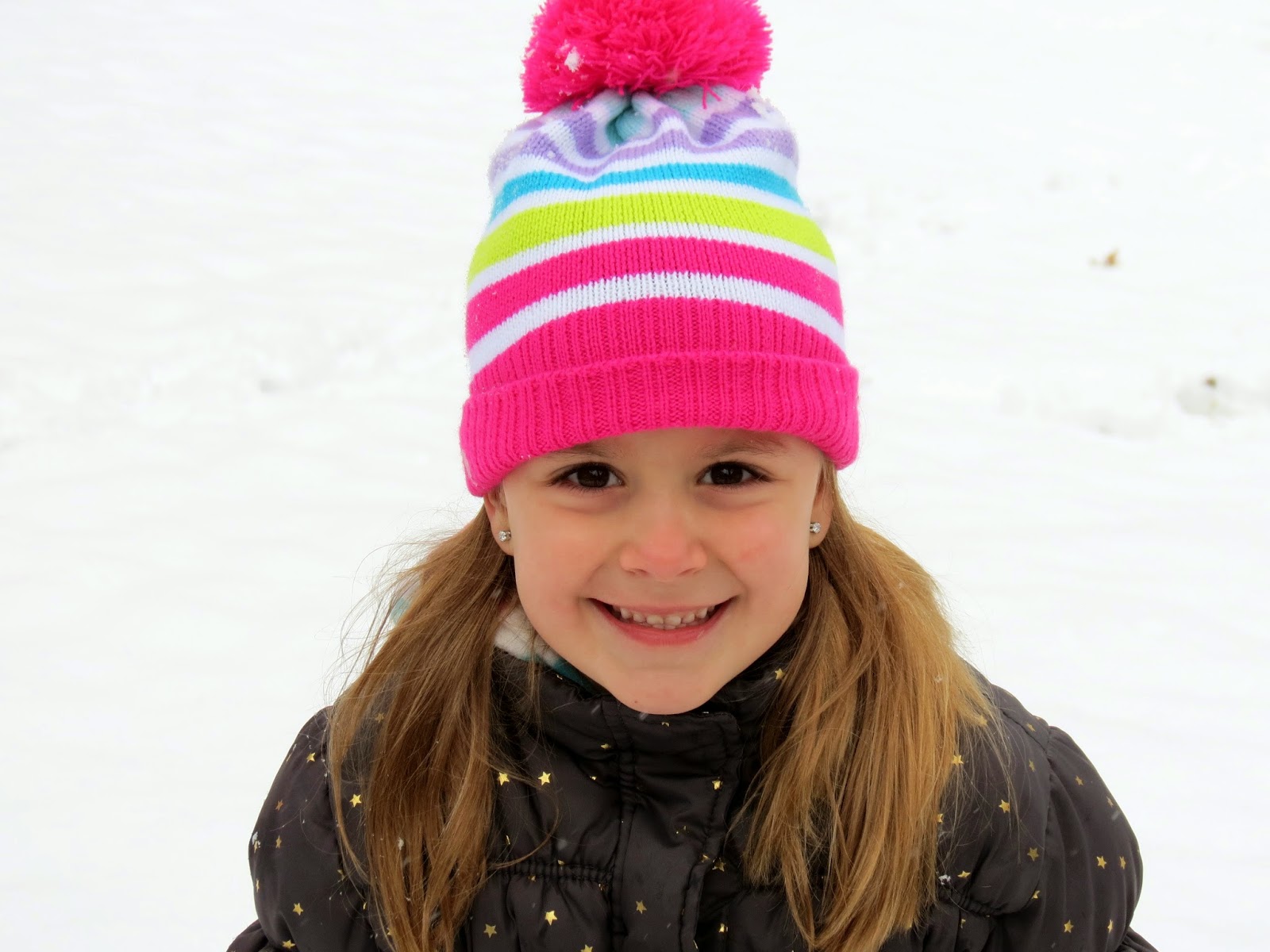 We also paid a visit to Crown Center. 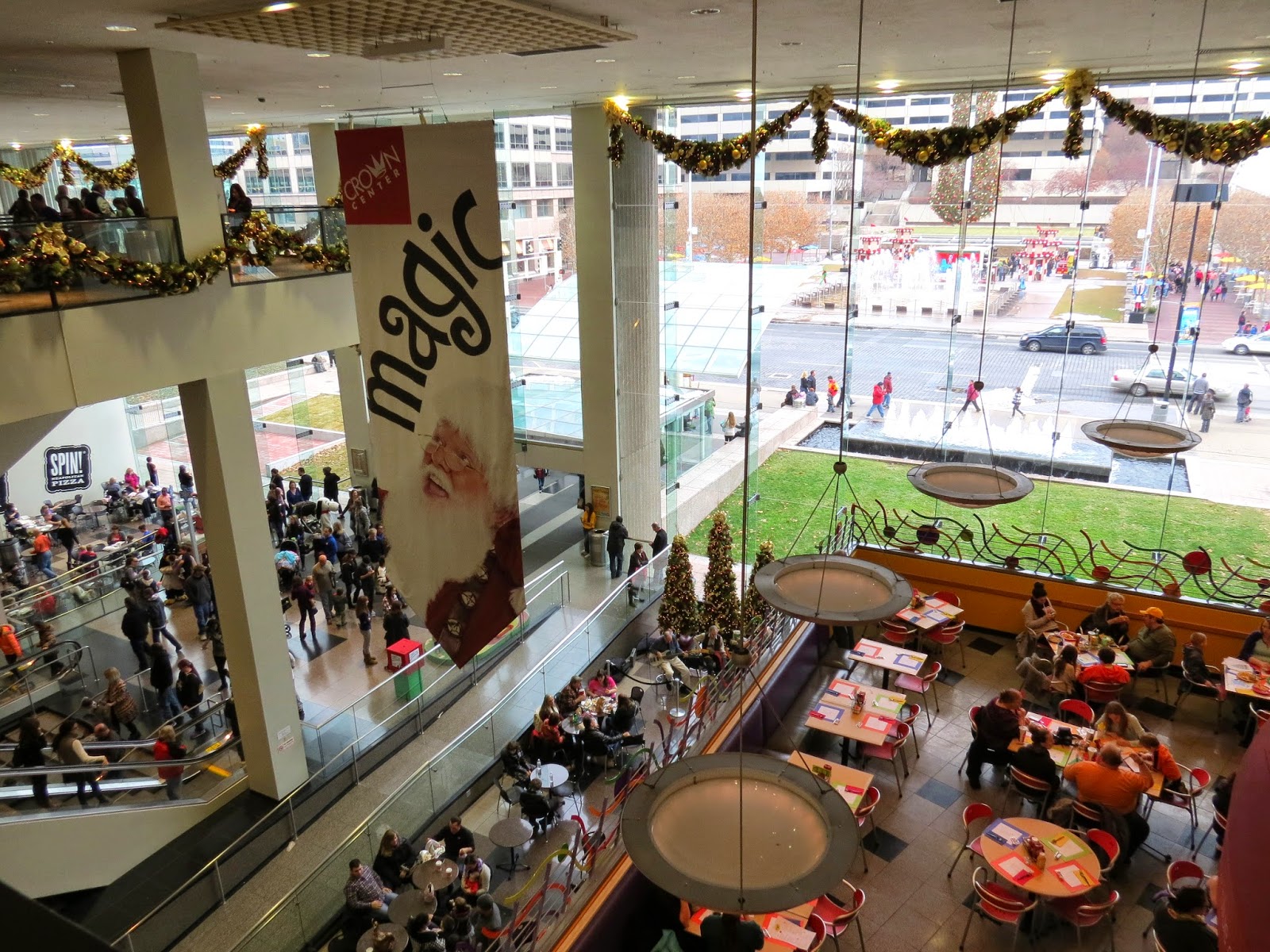 It's always so fun to walk around during the hustle and bustle of the Christmas season.  The Crayola Store... 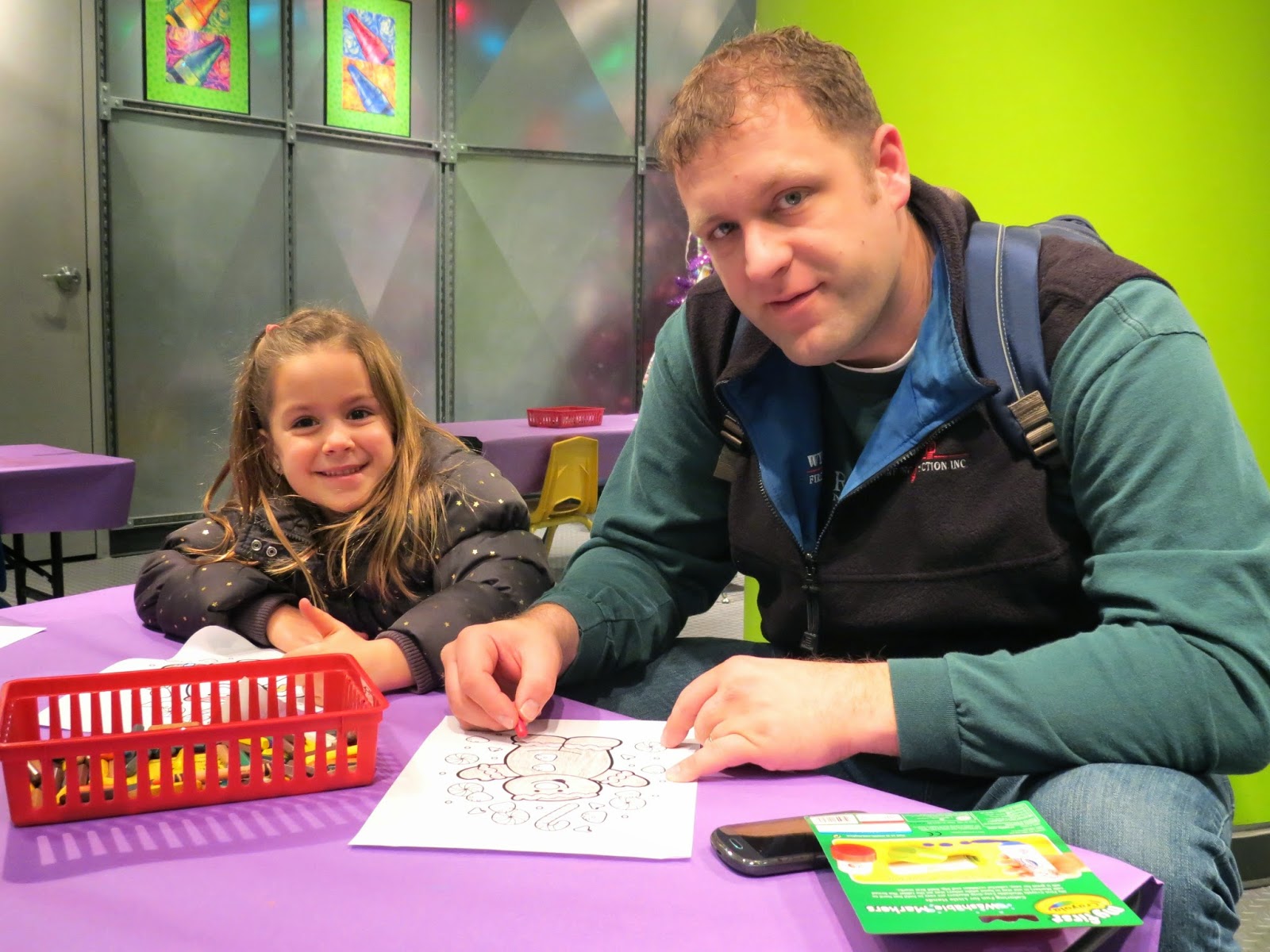 as well as Chip's Candy Factory, is a must... 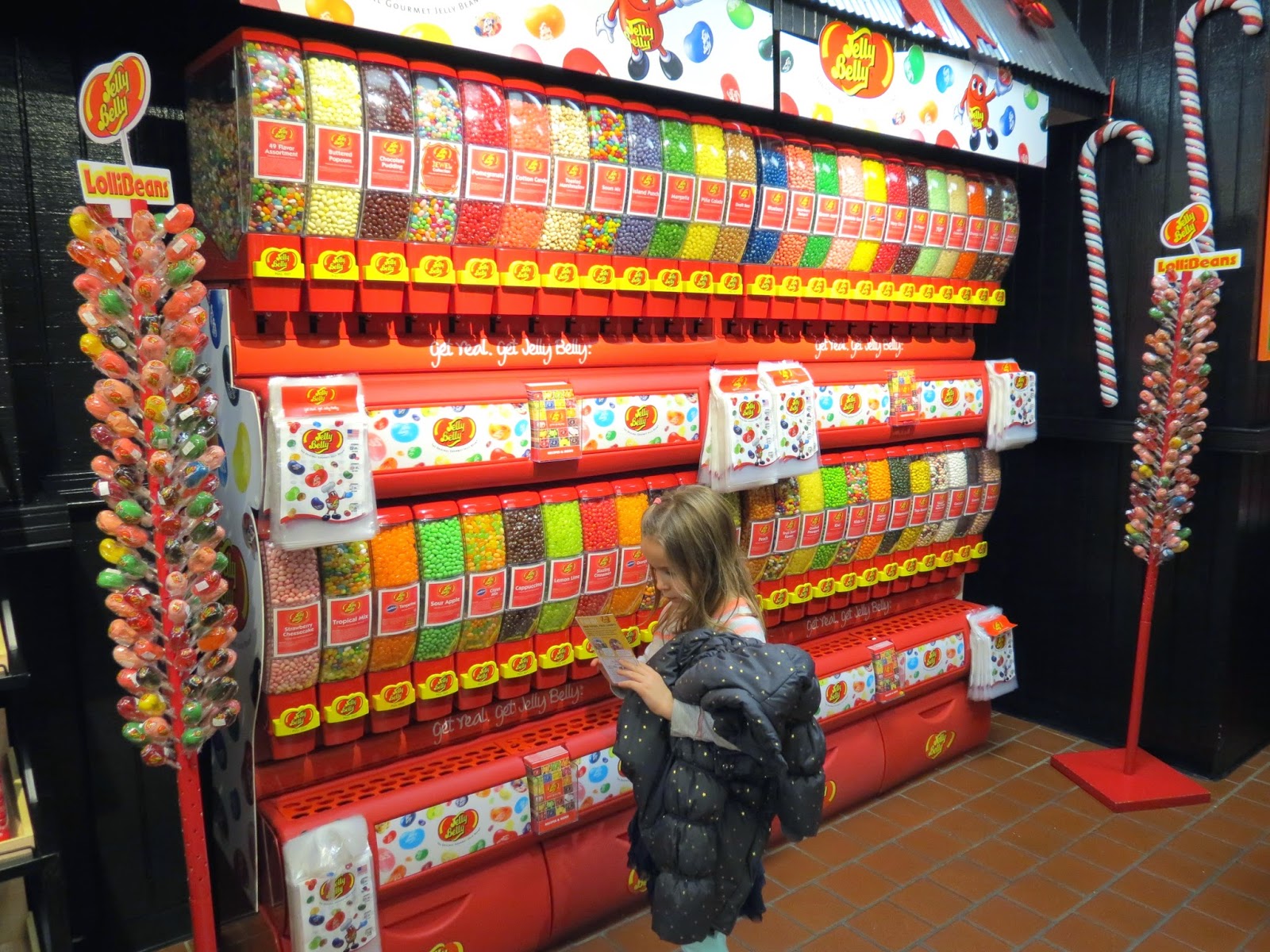 and the guys at Chip's Chocolate Factory really put on a show with their chocolate prep. 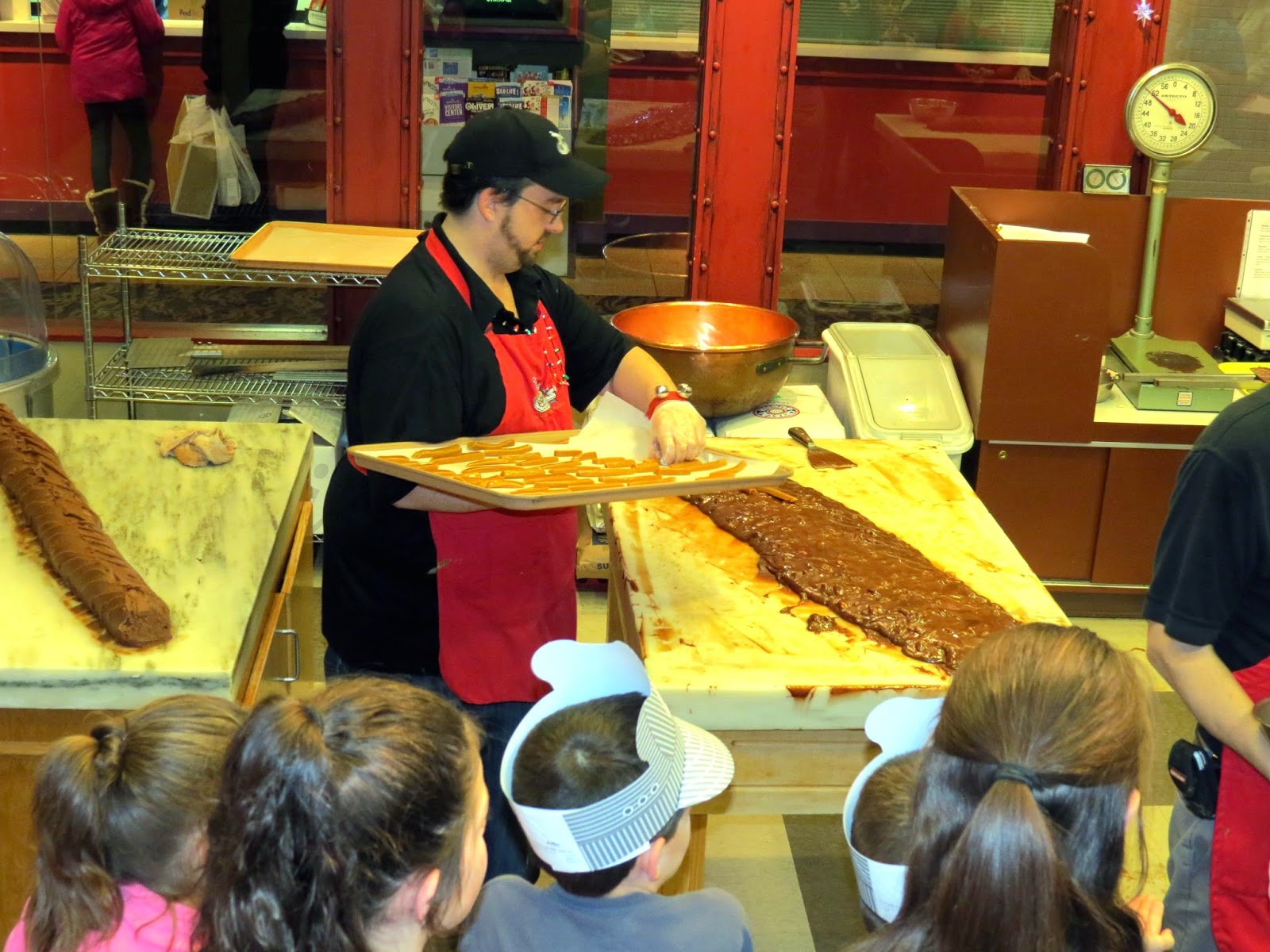 Oh, and check out the size of these cinnamon rolls from Big Momma's Bakery-Café!  We picked up a same size pan, but with four rolls for each of us, to take home... 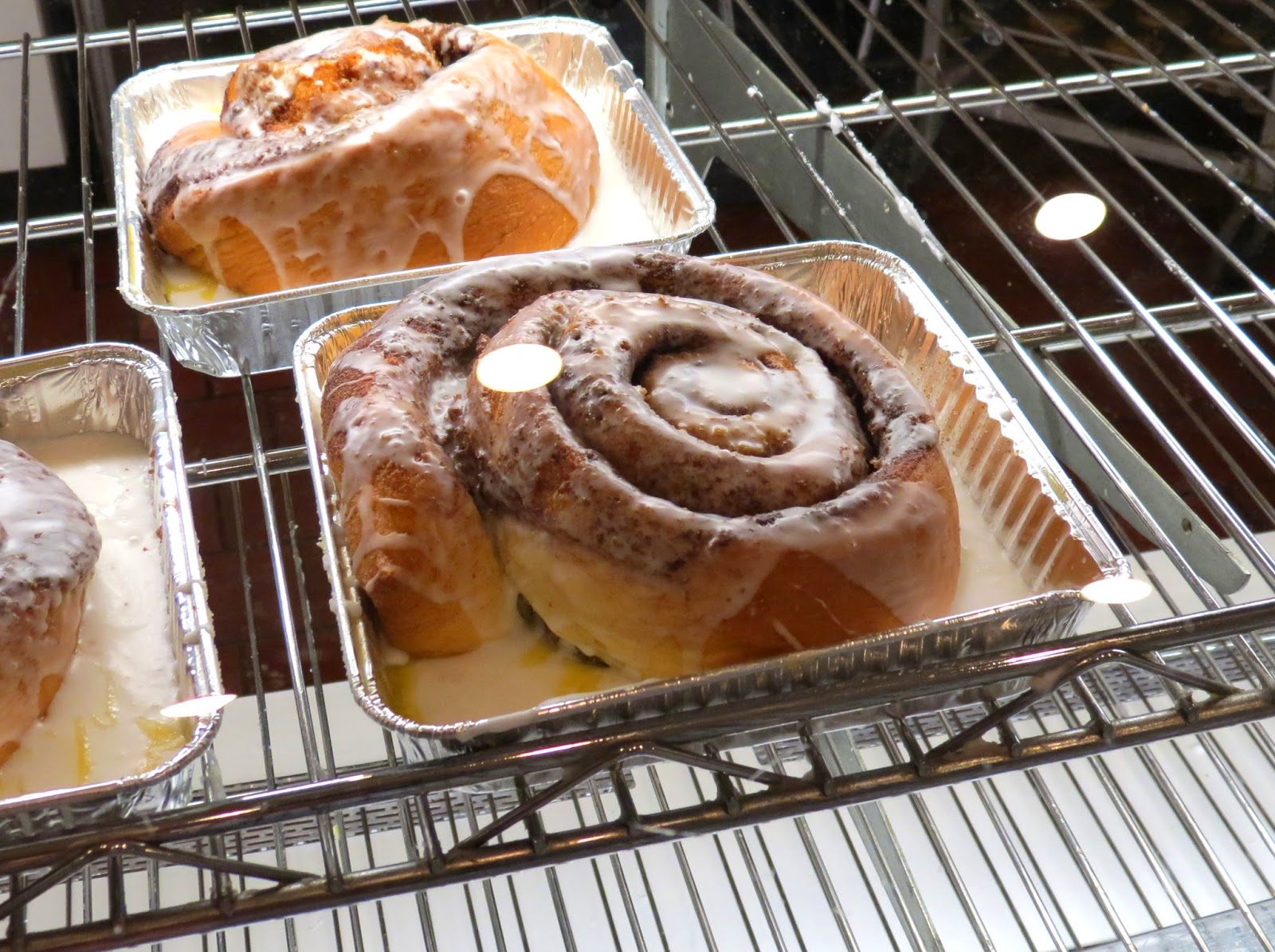 because we'd just filled our tummies with lunch from Fritz's Railroad Restaurant.  It's always so fun to have our food delivered by a train.  The lines were super long this time, though, so my kiddos didn't enjoy it as much as they have in the past, which might actually have been a good thing, since the food leaves little to be desired.  Plus, who doesn't allow their patrons to have drink refills anyway?  LOL! 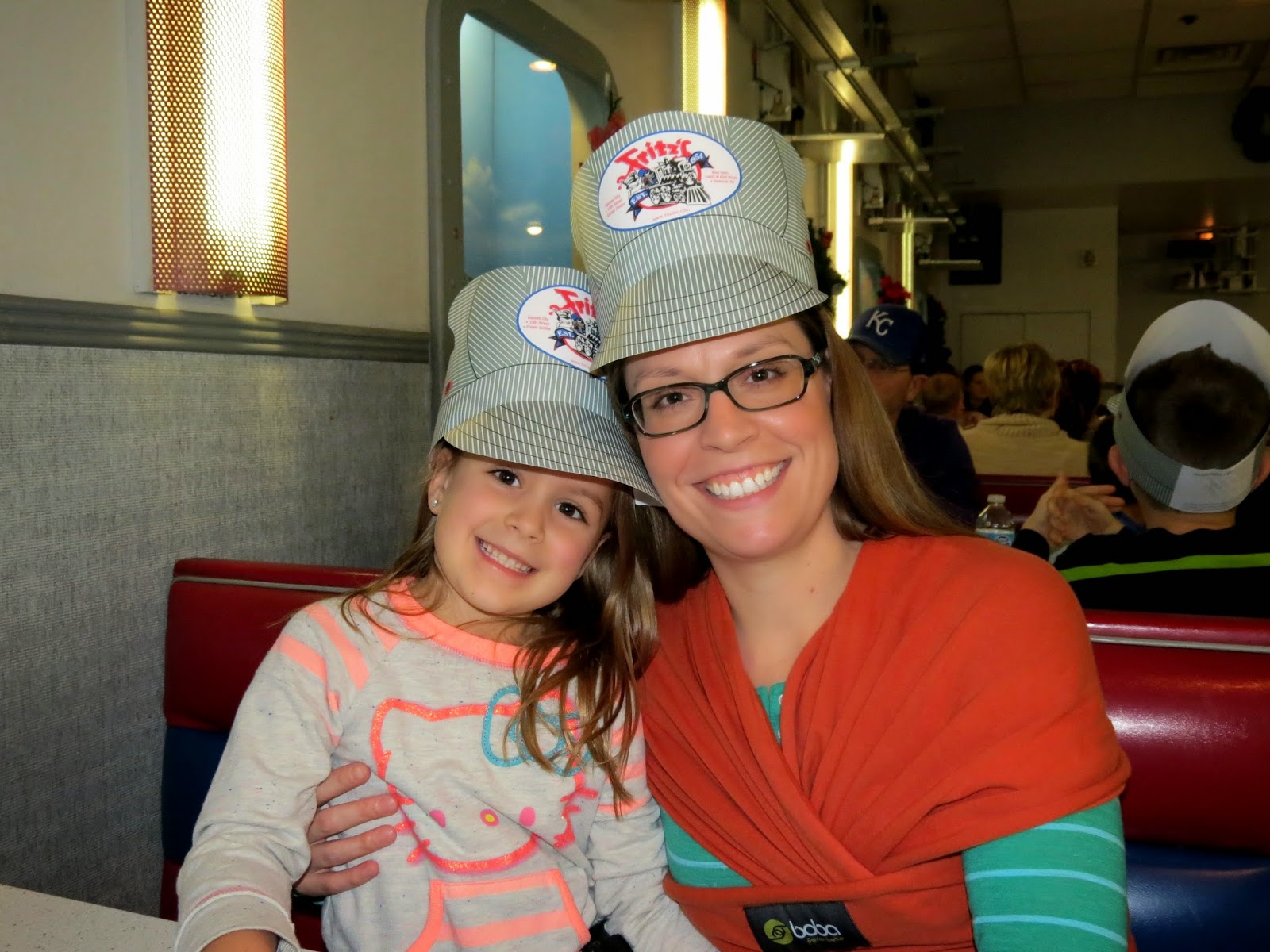 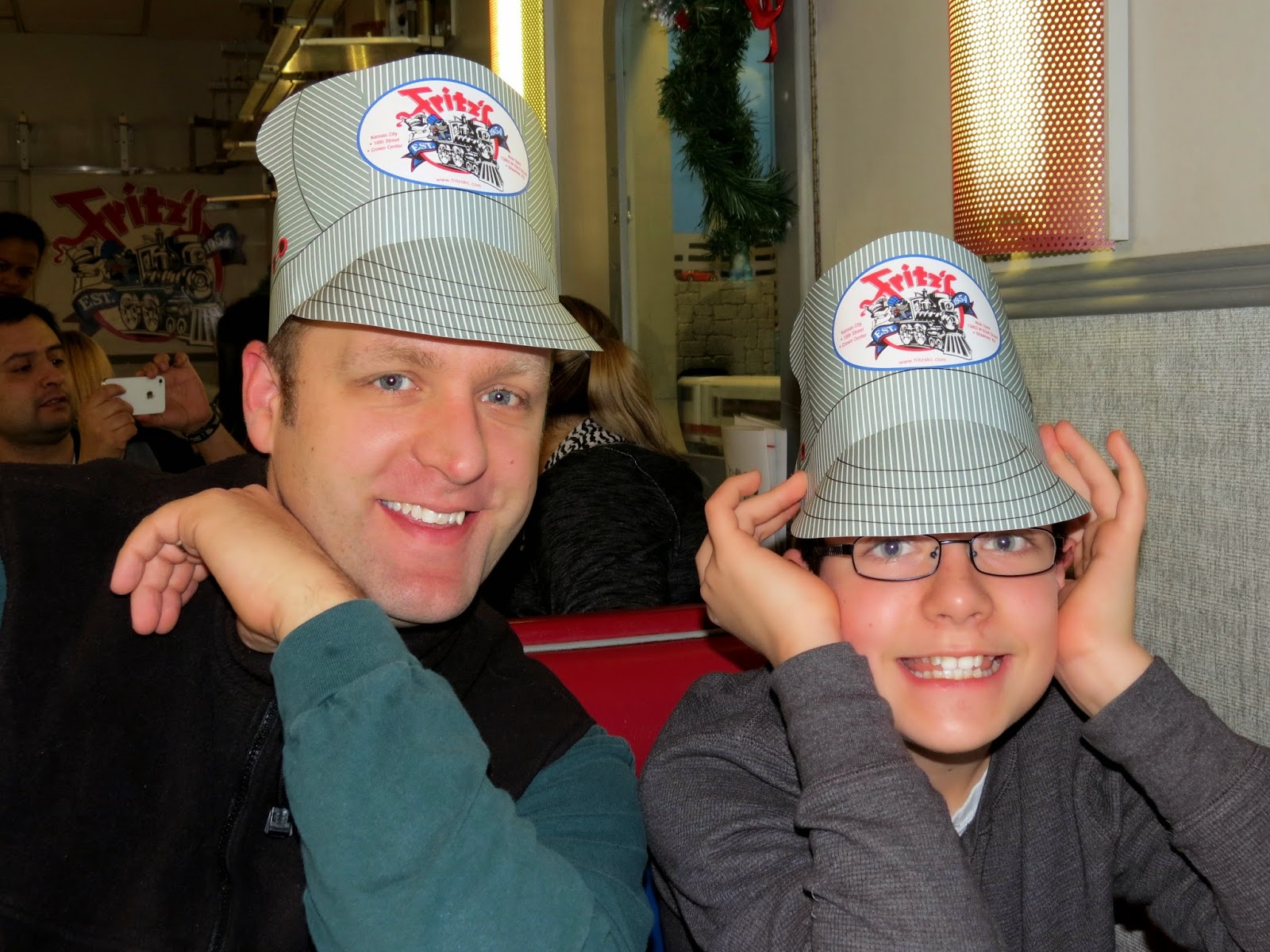 We so enjoyed our downtime from school for the holidays.  My kiddos played games, gave their books and art supplies a run for their money, and got caught up on their Christmas movies.  In case you're wondering, that's a Fisher Price Little People baby Jesus my littlest has in his mouth below.  LOL!  There was also a lot of picking on one another and arguing despite all the Christmas preparations and activities that kept us running, so it was a welcome relief when my biggest went to visit his grandparents for a few days last week. 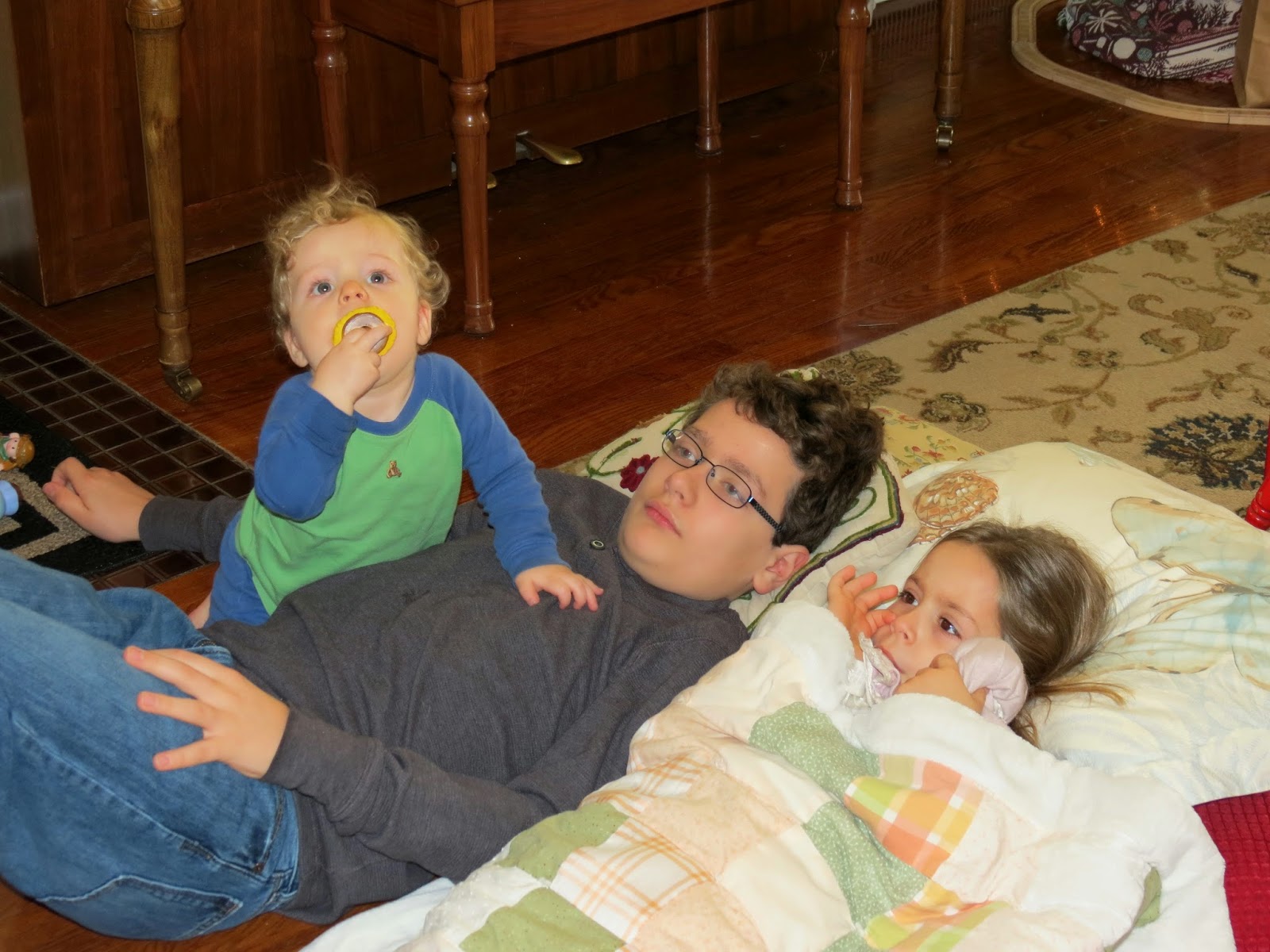 Now, we're back in the swing of school, Awana, and basketball practice.  Although, the frigid temperatures and a nagging cold, that my littlest just can't seem to shake, have kept us from getting out and about much more than that.  This is when one needs a grocery delivery service or a cheap, but loving, built-in babysitter ;).  Anyway, my nephew had a birthday just a couple of days after Christmas.  So, I'll be back tomorrow to share the card I made for him.  Until then, thanks so much for checking in on us, and have a wonderful day!
Posted by Jinny Newlin at 7:00 AM

Loving the photos!! Looks like you had a wonderful holiday!! And I hear you ... Adam went to visit his Father's parents for a few days after Christmas ...and I was like "bye! see ya!" LOL!!!

Wonderful family photos filled with fun, Jinny! The outside Christmas lights are very pretty. My husband puts them up here and we had them lit until two days ago. They need to come down, but it's bitterly cold here. Your sweet kids are growing up so fast...just darling!:-)

Lovely lovely photos!! And he is the cutest kiddo ever! So nice to see you all enjoying yourselves ... Have a great new year