Well, hello there.  I'm playing catch up again over here.  My family and I came down with some kind of a stomach bug all at the same time last week.  The only benefit in that was that it was quiet enough for everyone to get the rest they needed.  Fortunately, it didn't put us out more than a few days from beginning to end.  Then, I spent a portion of the weekend washing and disinfecting everything.  Since our illness occurred over my birthday, we postponed the celebrations until then as well.  My hubby made me my favorite Apple Crumb Cake.  I only get it once a year, so I'm always ready for it come my birthday.  I'm not sure why somebody's plate made it into the shot, and my poor baby wasn't very happy.  He's getting another tooth, but if I don't take the bad photos with the good, I wouldn't have any with me in them to remember I was even there. 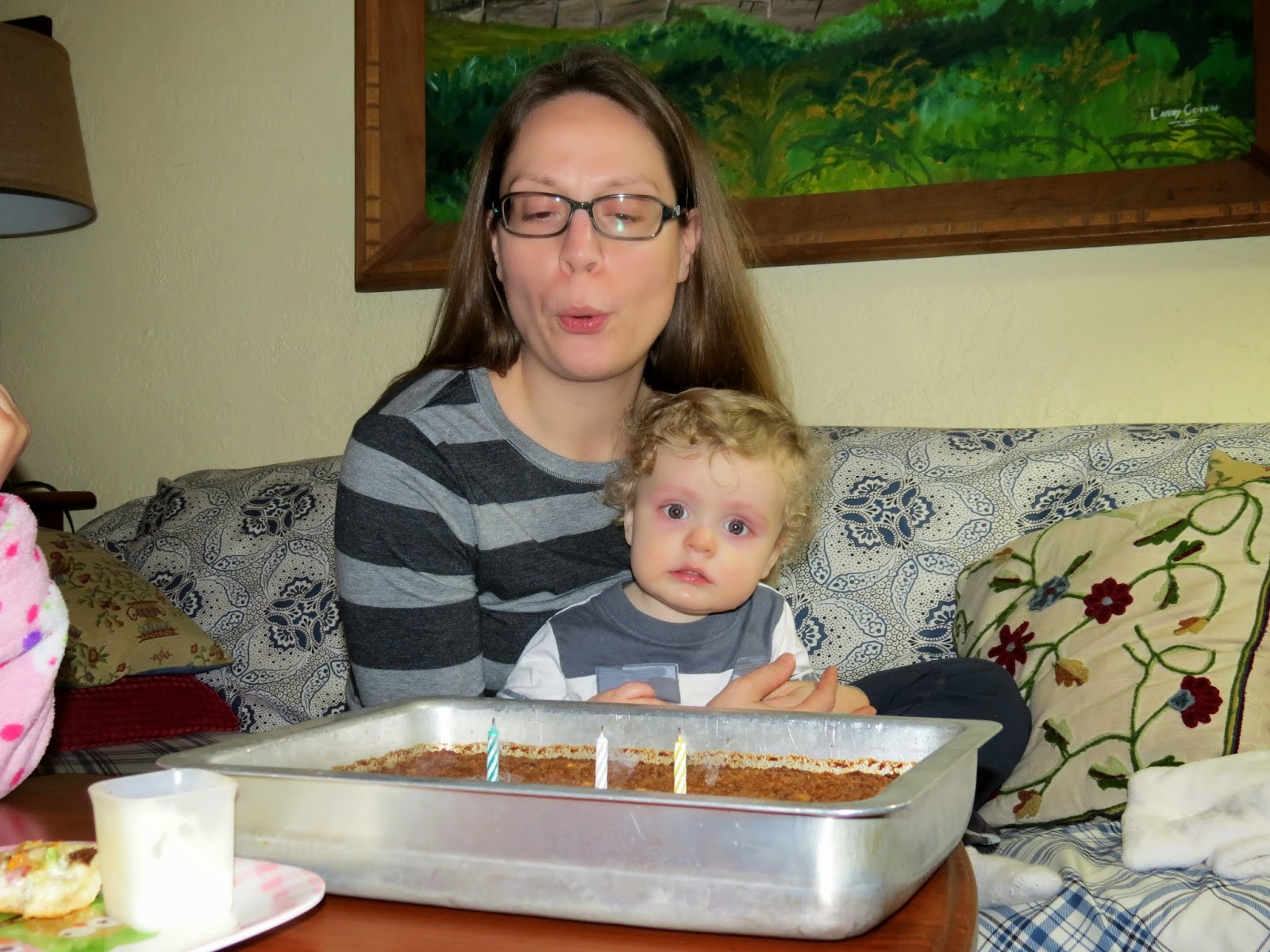 This one isn't any better, but we continued the celebrations, with a little lunch out, after my big kiddos' basketball games on Saturday morning. 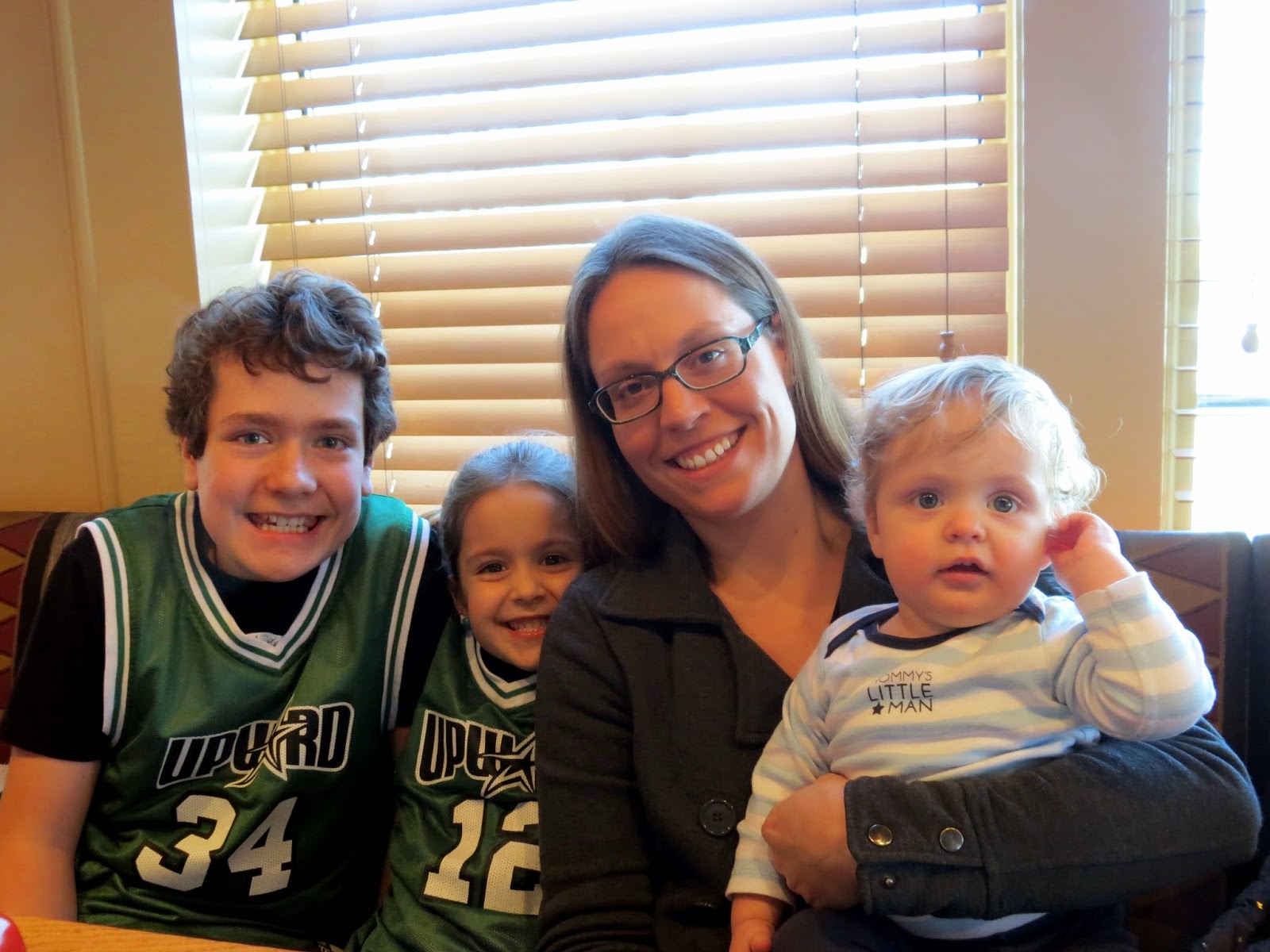 Speaking of, basketball is going well.  There has been a lot of differences to get used to in this particular league, but Ezekiel and Adina are both learning a lot and enjoying the game. 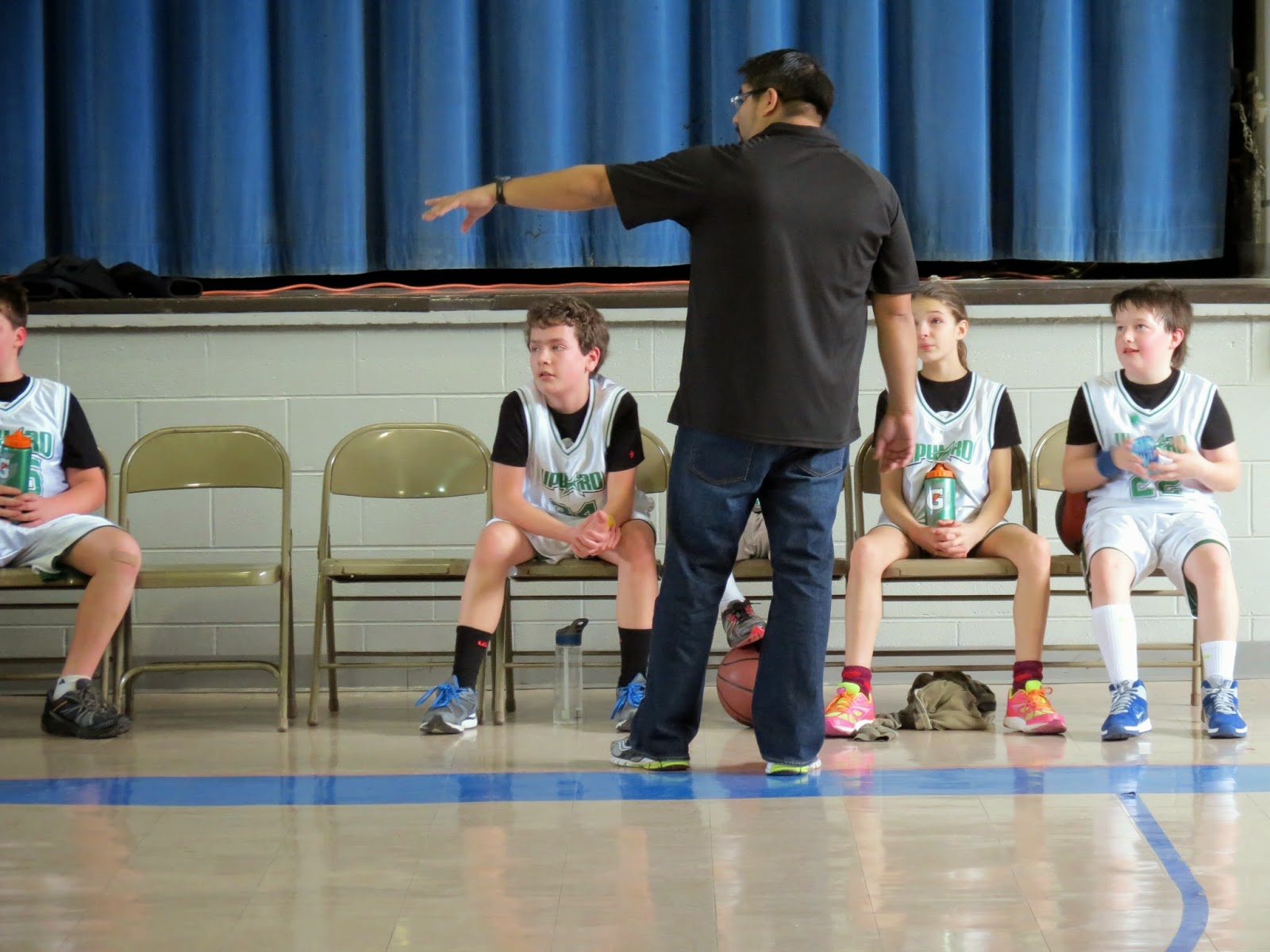 Poor Adina is in a kindergarten to 2nd grade bracket, so the goal is too high for her to actually reach, unless she's shooting backward over her head.  She's really great at making her opponents chase her around the court, though.  Tee hee!  Plus, she really loves having her Daddy for a coach. 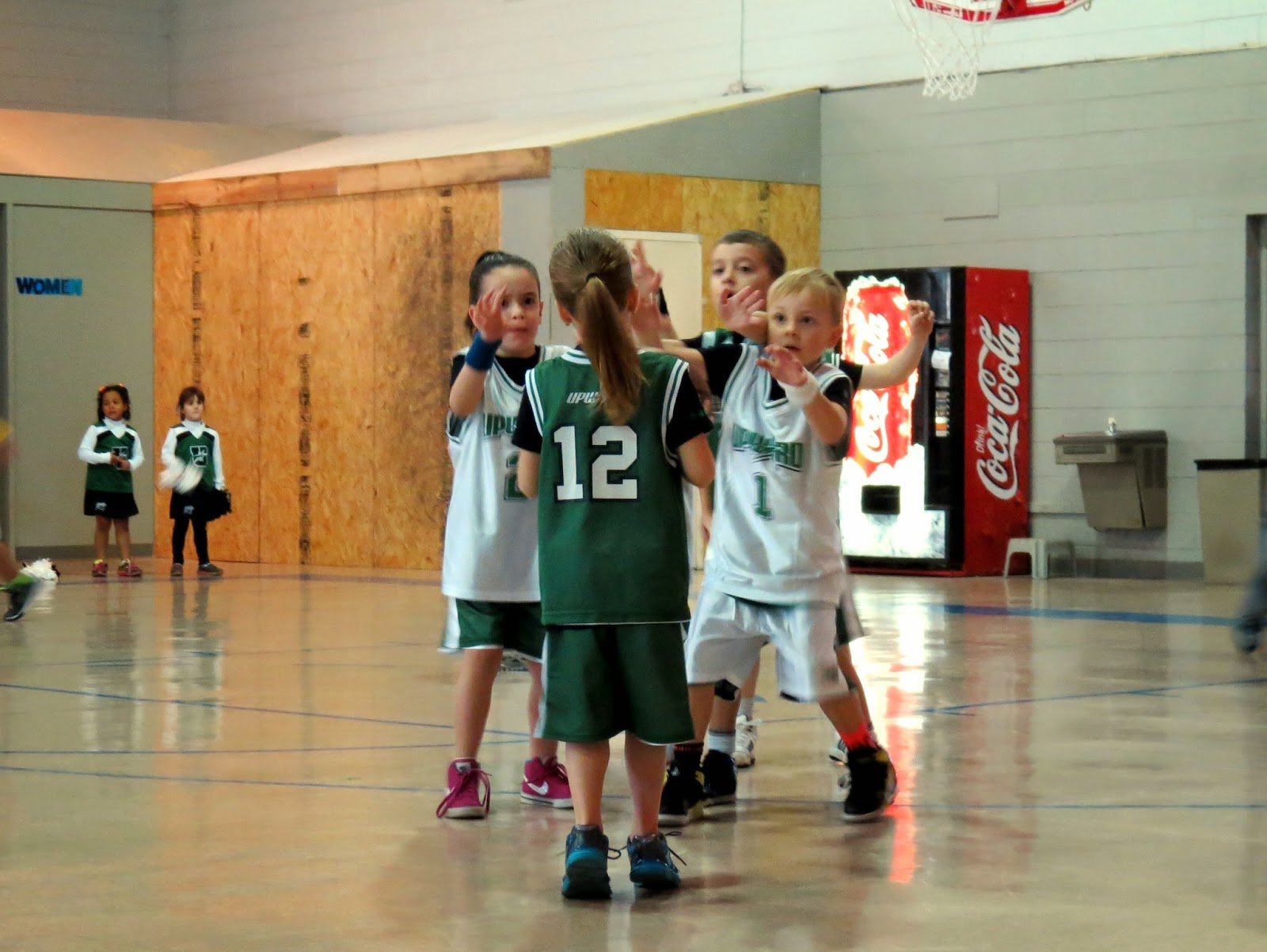 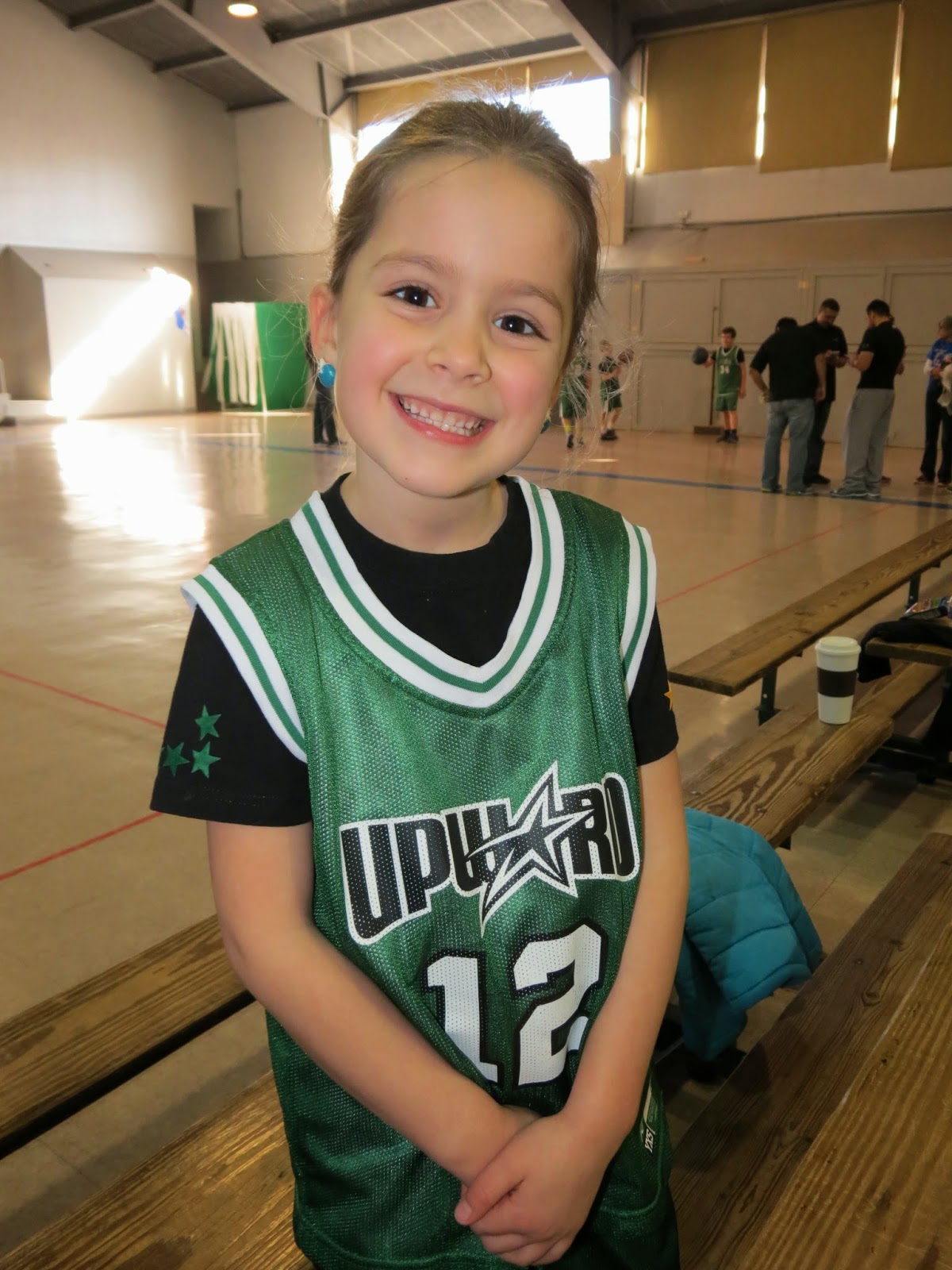 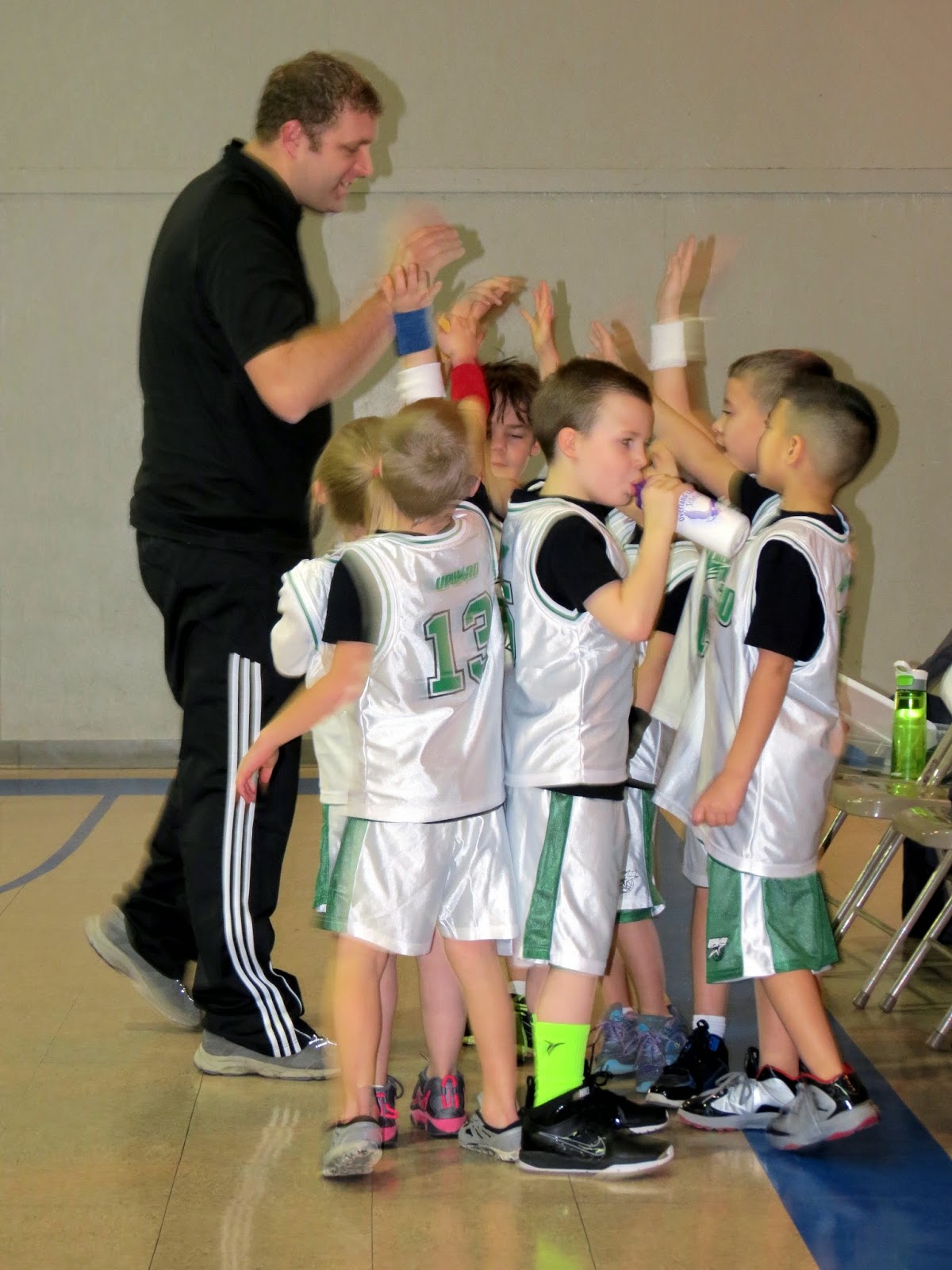 I have a lot more decent shots of Adina playing than Ezekiel, simply because this little guy, although he is super happy in the photos below, is grumpy and ready for his morning nap by the time Ezekiel's game rolls around.  He just loves to play with the kids' basketballs.  Really, he'll take any ball.  He'll even toss one back and forth with a partner for what seems like hours at a time.  My other two didn't have the catch and release down for at least another year or two.  Anyway, I promise to continue to try to get a few good shots for the scrapbooks; and if I do, I'll definitely share them here. 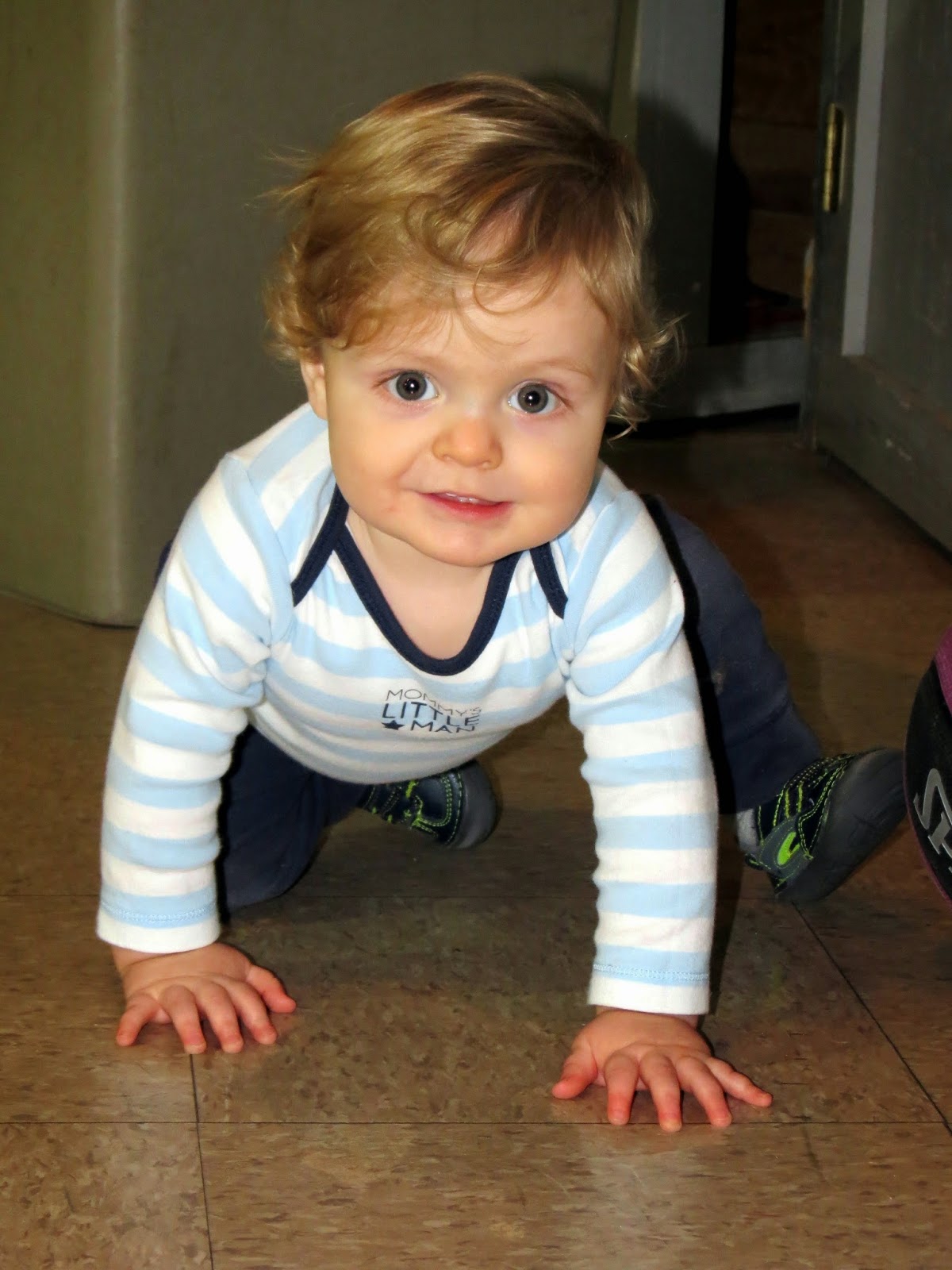 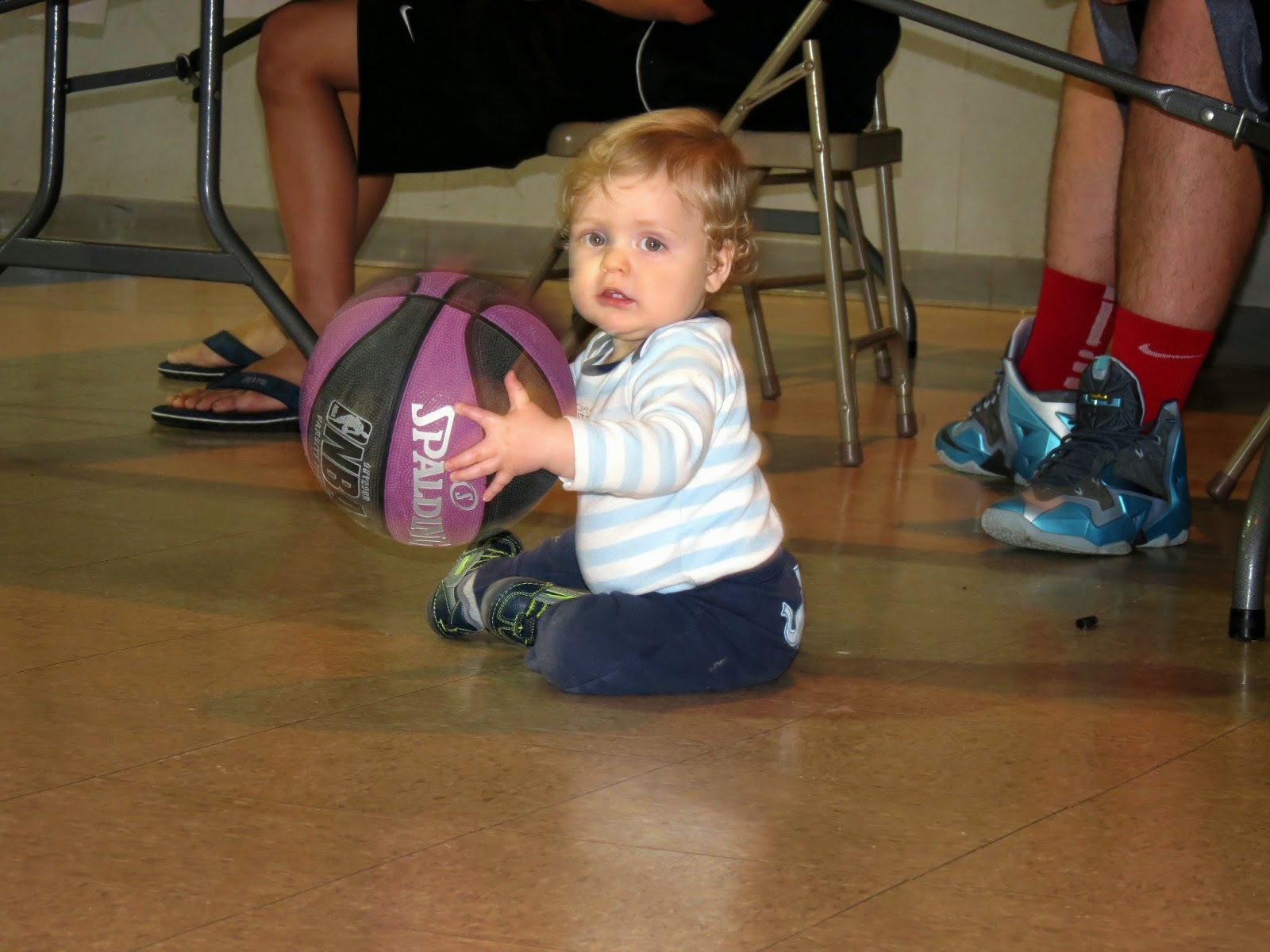 The weather has been beautiful!  I'm talking upper forties and fifties.  That's so out of character for January in Kansas, but if there isn't going to be snow on the ground, I'd much rather it be warmer.  So, my big kiddos have had lots of time to shoot hoops with their Christmas basketball goal.  We, also, worked hard to finish up our studies a couple of Fridays ago and took the afternoon off for a trip to visit our furry friends at the KC Zoo. 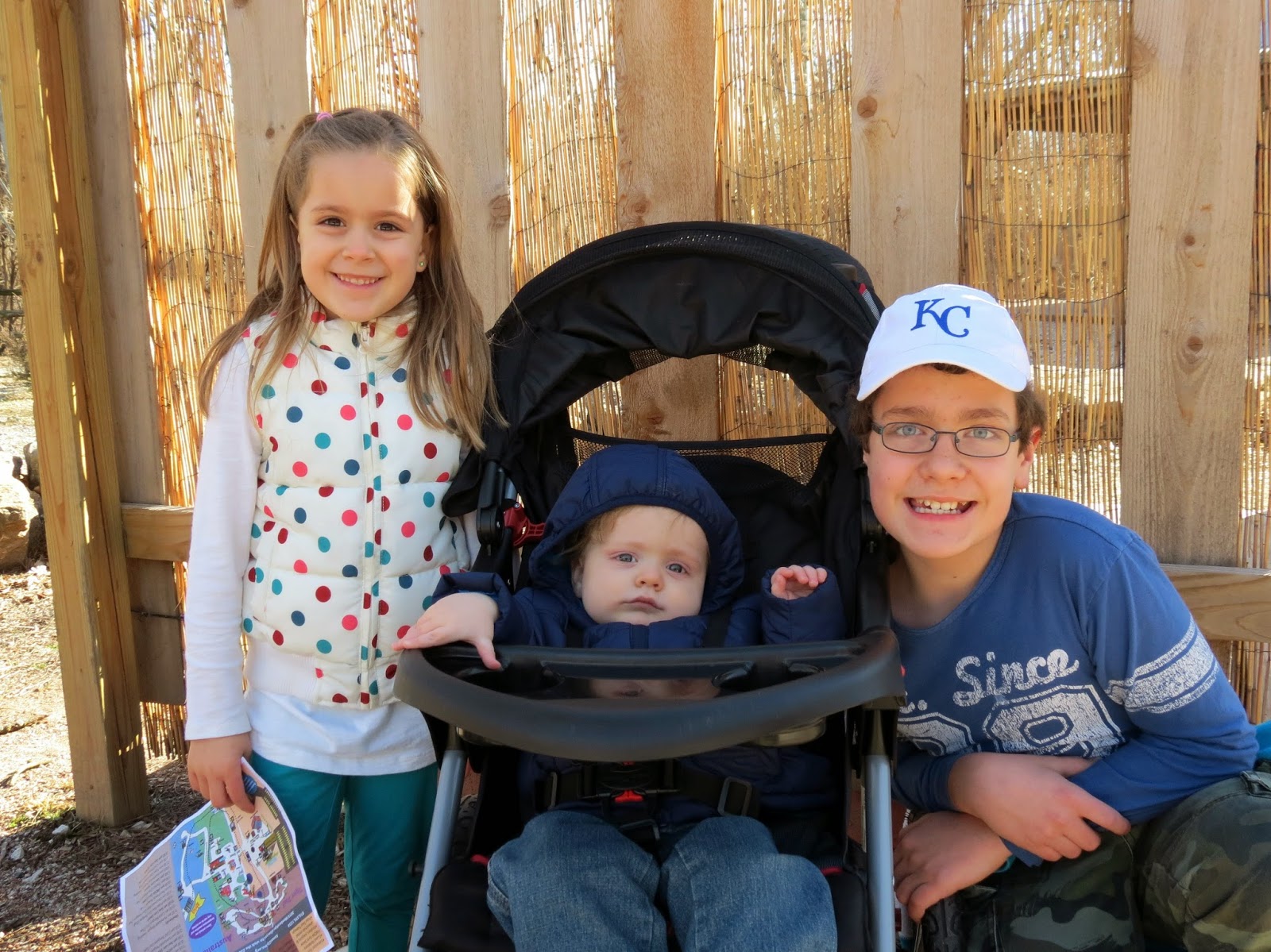 Once again, the shots are few and far between.  My arms are always full, but I'm not complaining.  I'll just get what I can during the bits my little bear tolerates his stroller and save the rest for my memory, but what a great afternoon! 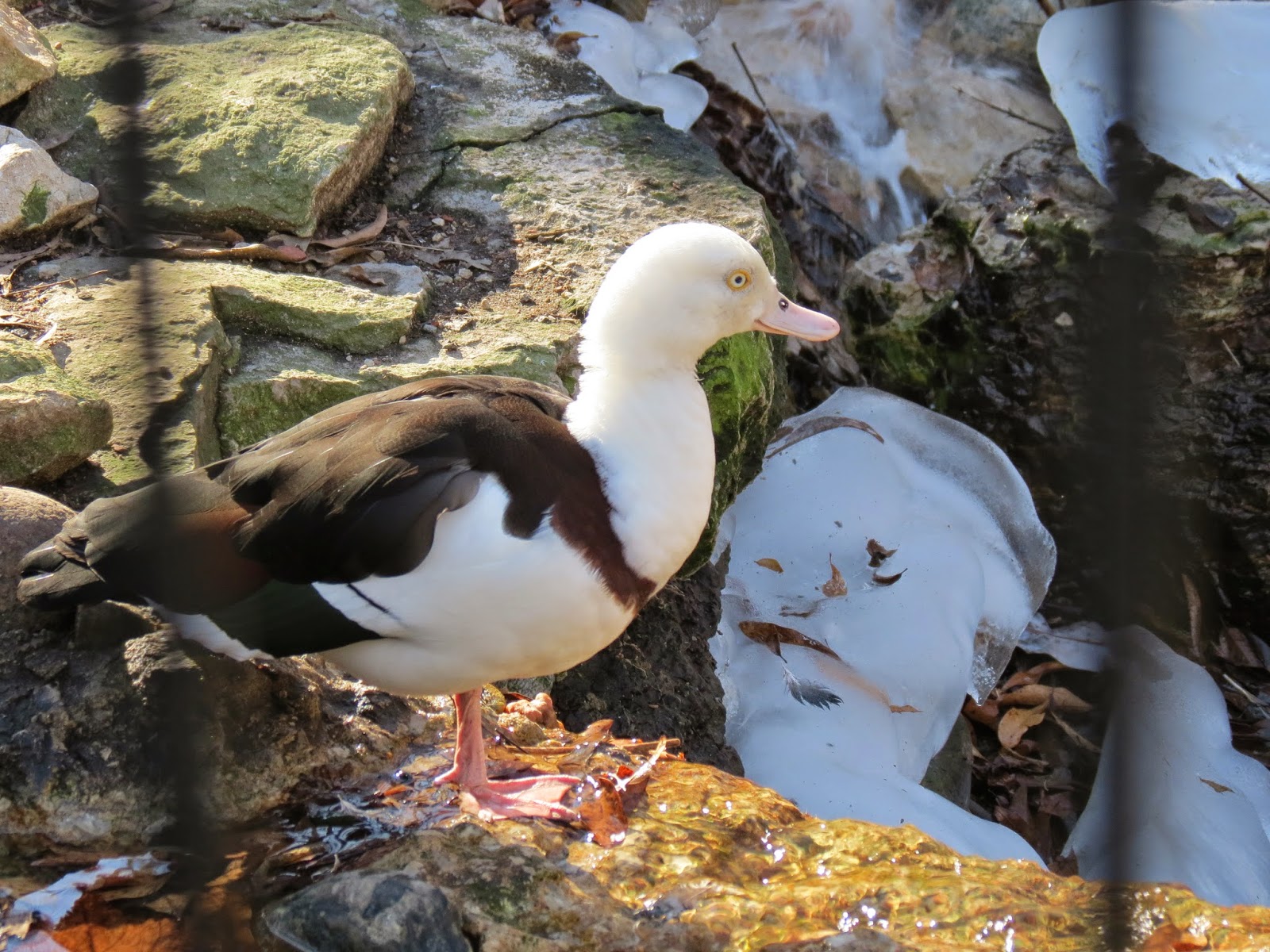 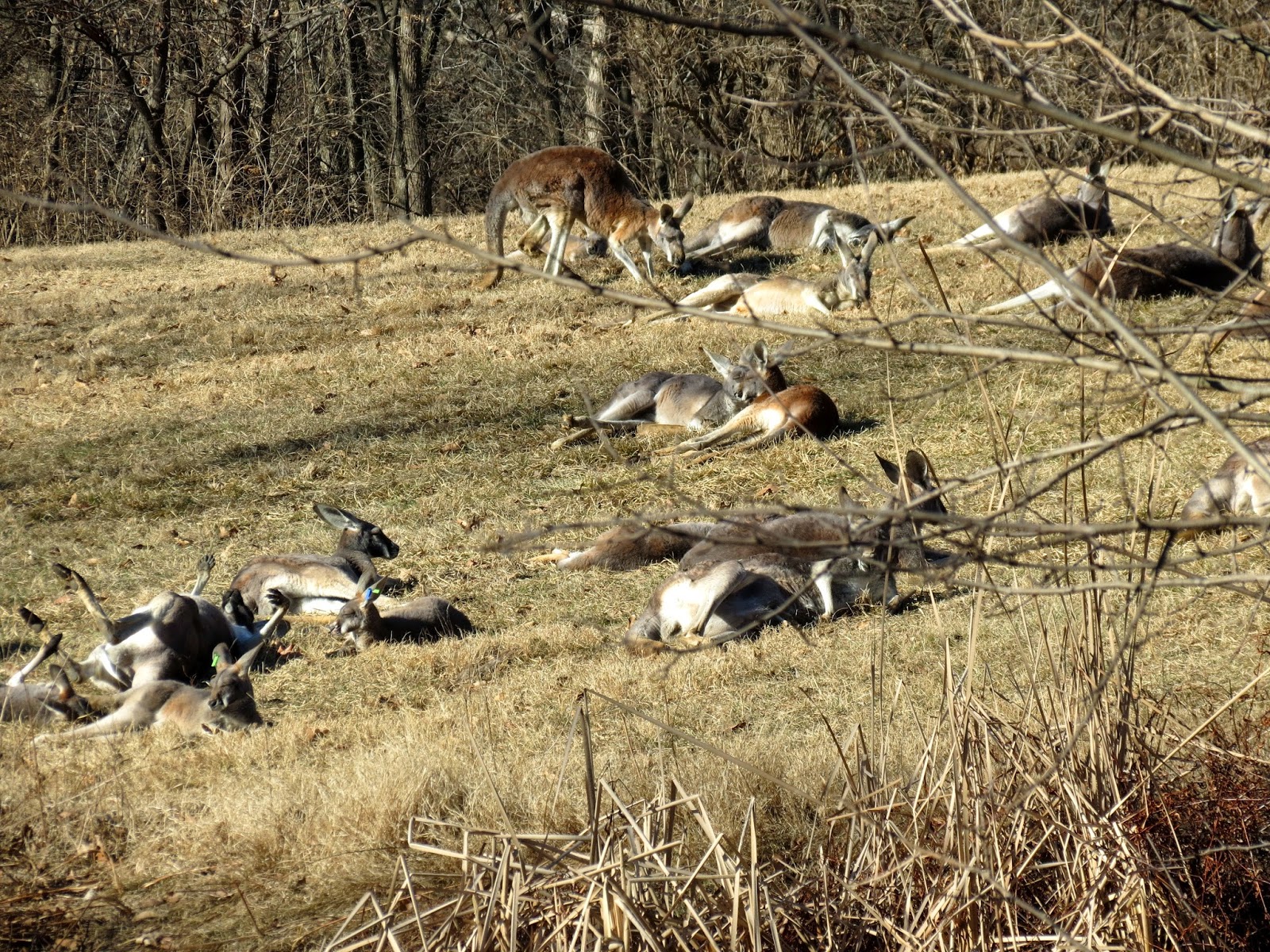 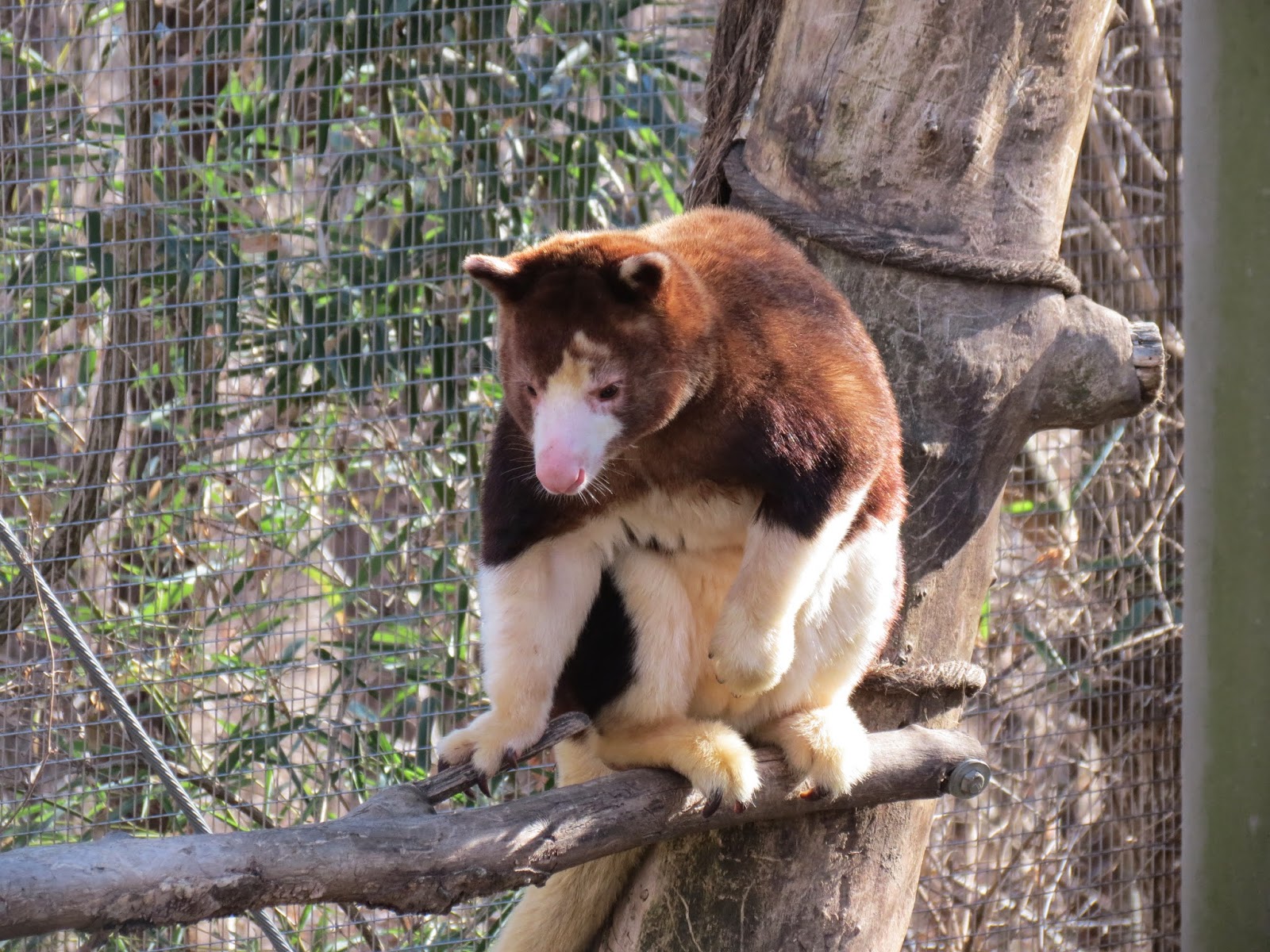 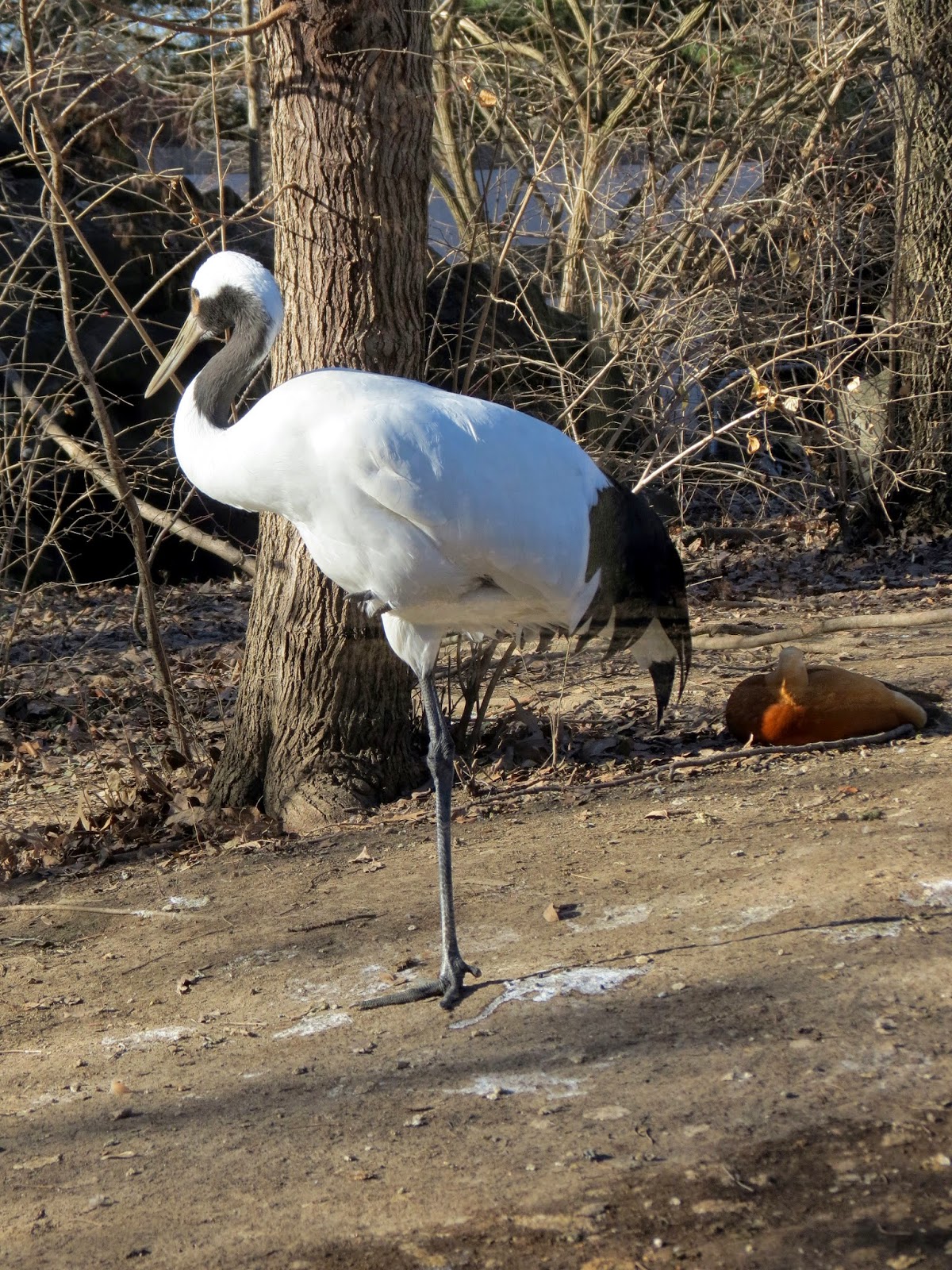 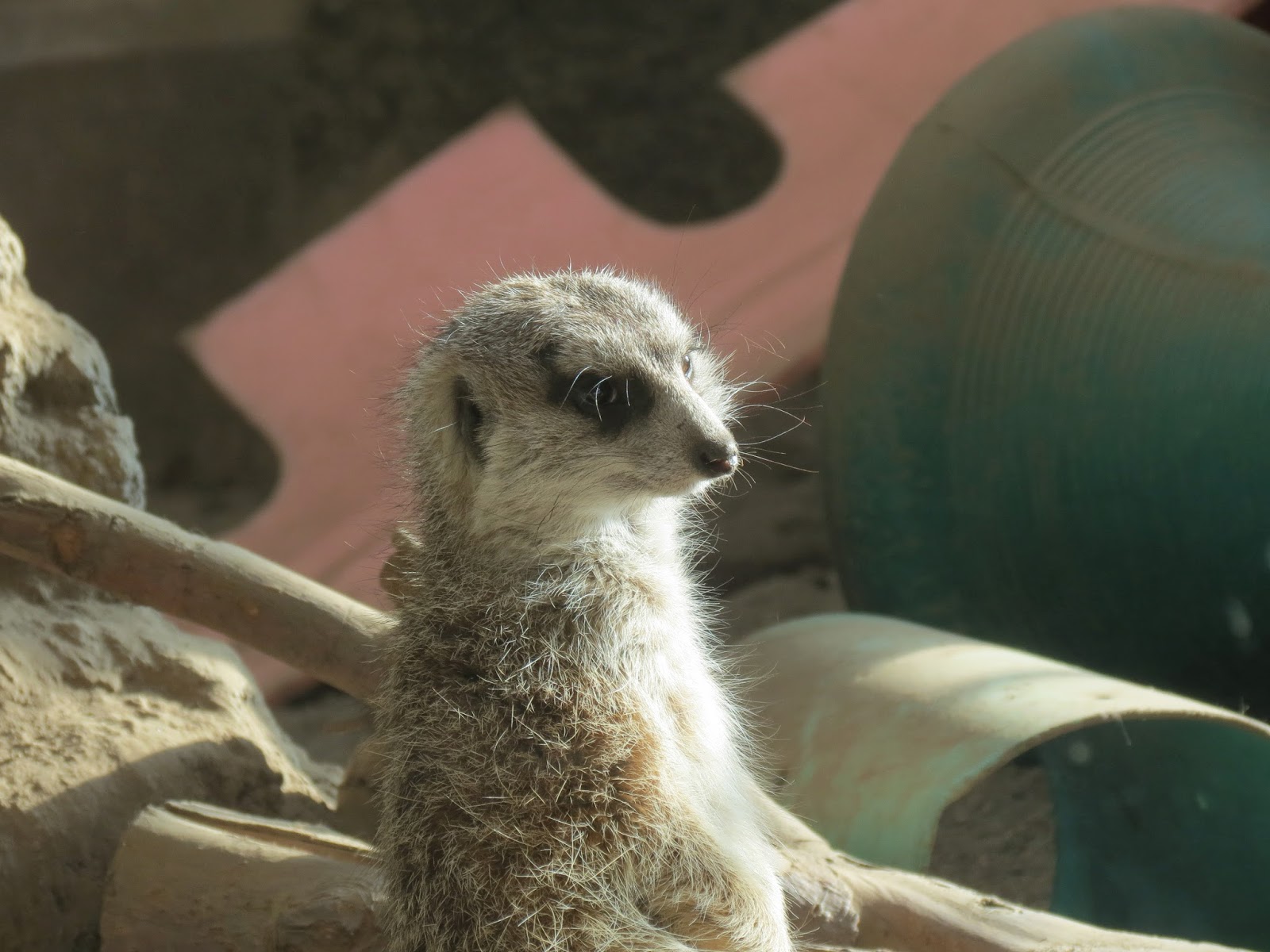 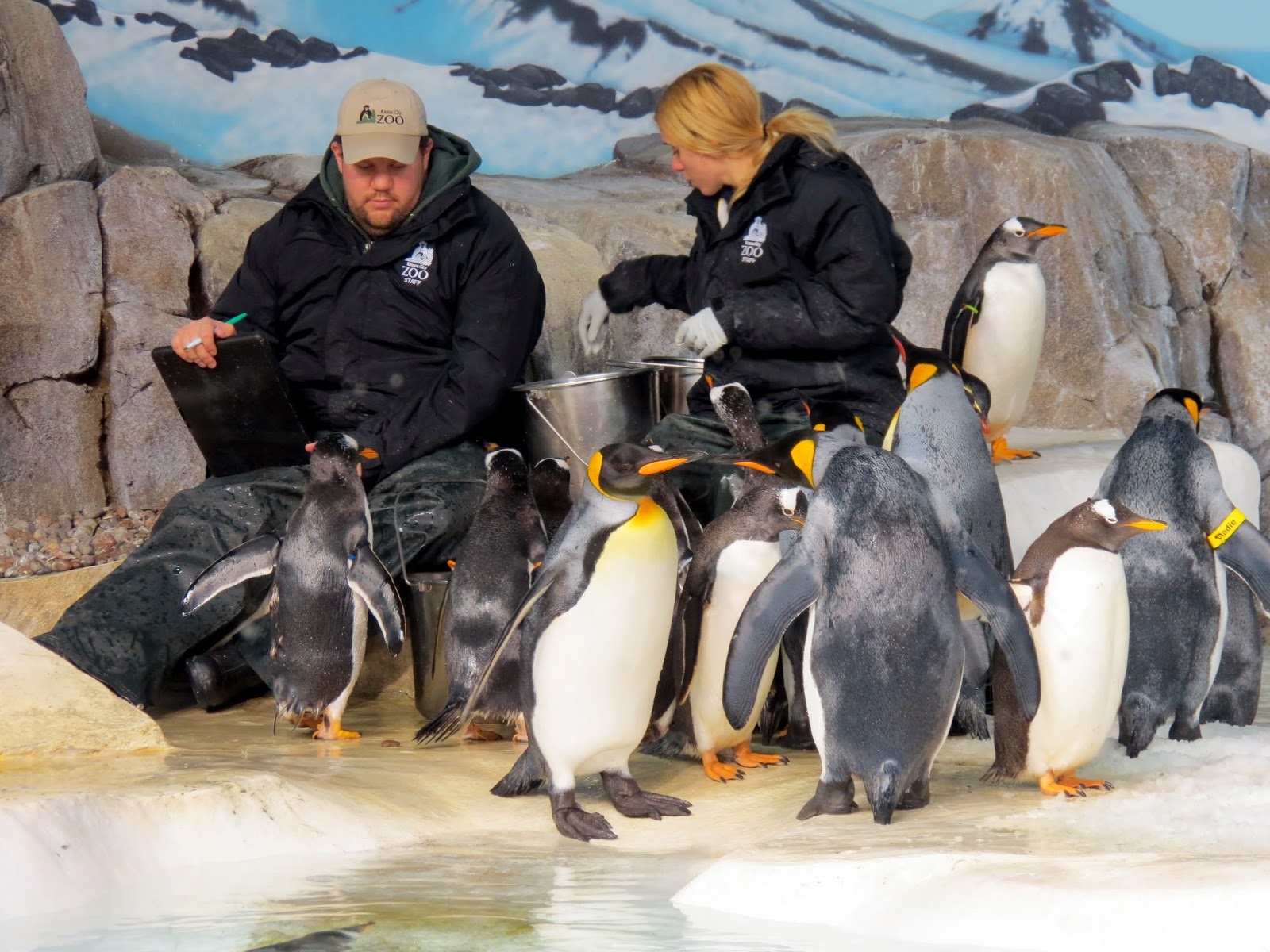 I got another PINCHme box.  It contained a Mr. Sketch holiday scented marker, Expo Ultra Fine dry erase marker, and Olay Fresh Outlast body wash.  If I'd gotten literally any other holiday scent from candy cane to gingerbread, with the exception of maybe chimney, I think I would've been a bigger fan of the first.  But I got Christmas tree.  Ugh!  That scent is really only good in its natural form, not to mention, that while the color is bold and the tip long-lasting, they aren't washable.  That's a HUGE deal breaker for this mommy of three.  I was super excited to try out the dry erase marker.  I've looked for years for a marker with that fine of a tip, and it worked awesome on our calendar.  The only complaint I have is that it smashes down pretty quick.  It's still thinner than any other dry erase marker I've been able to find on the market, but I can't see it holding up for the long haul.  And finally, I cannot tell you how much I loved the body wash.  It smelled good, lathered well, and left my skin feeling super soft.  Plus, my hubby noticed I'd used it.  He's pretty unobservant, folks, so that's got to say something.  LOL! 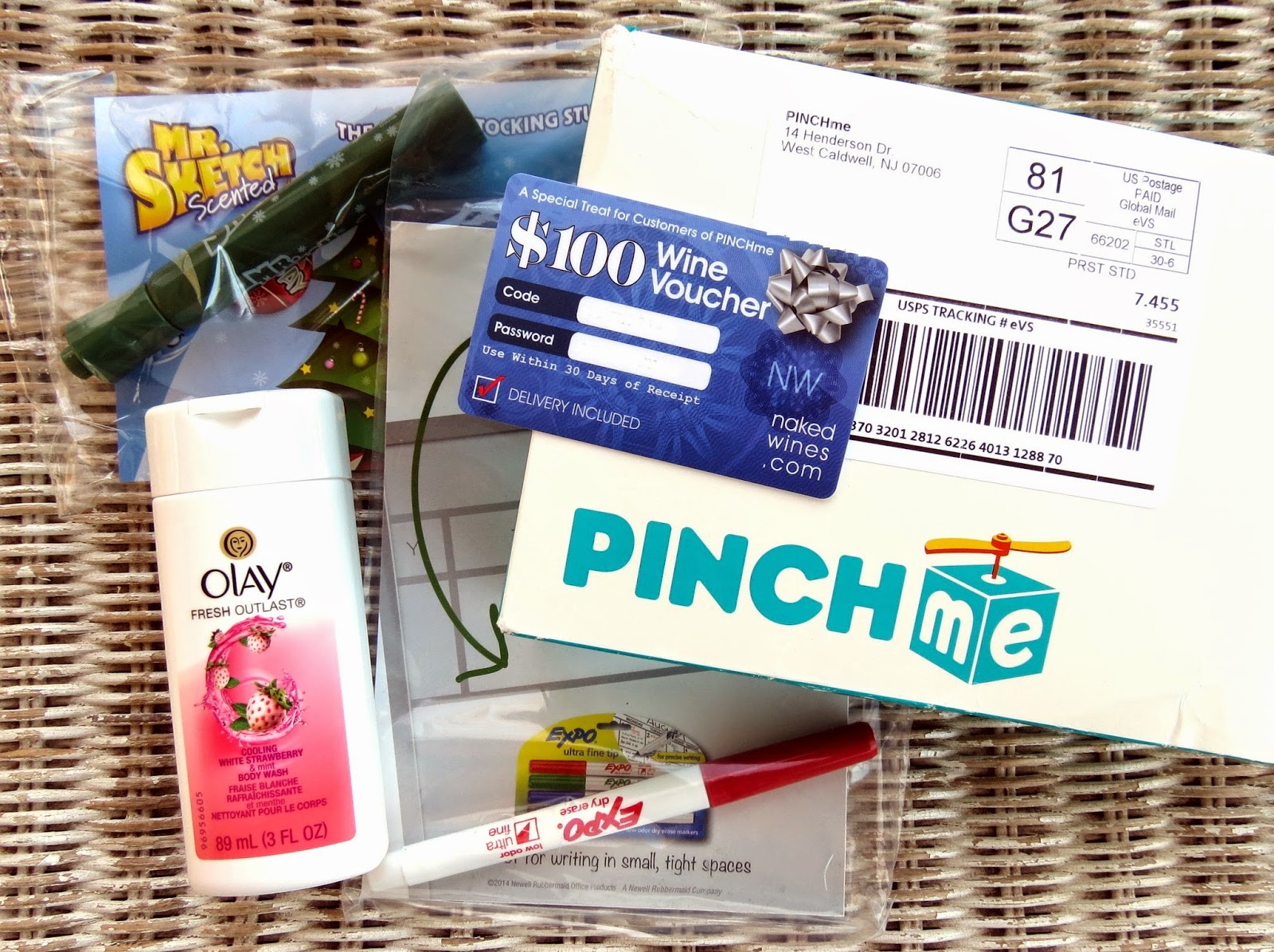 Just because they're too cute not to share, I had to throw in a few bath pics.  Sunday nights belong to me and this kiddo, as the rest of my family is away attending Awana Club.  I treasure the peace these nights bring.  This guy is my saving grace.  It's so easy to make him smile.  He's pleased as punch most of the time, loves to listen to me read or just sit and play quietly while I work, and is the best cuddle bug.  All that is such a welcome relief from the struggles and sass of the preteen years. 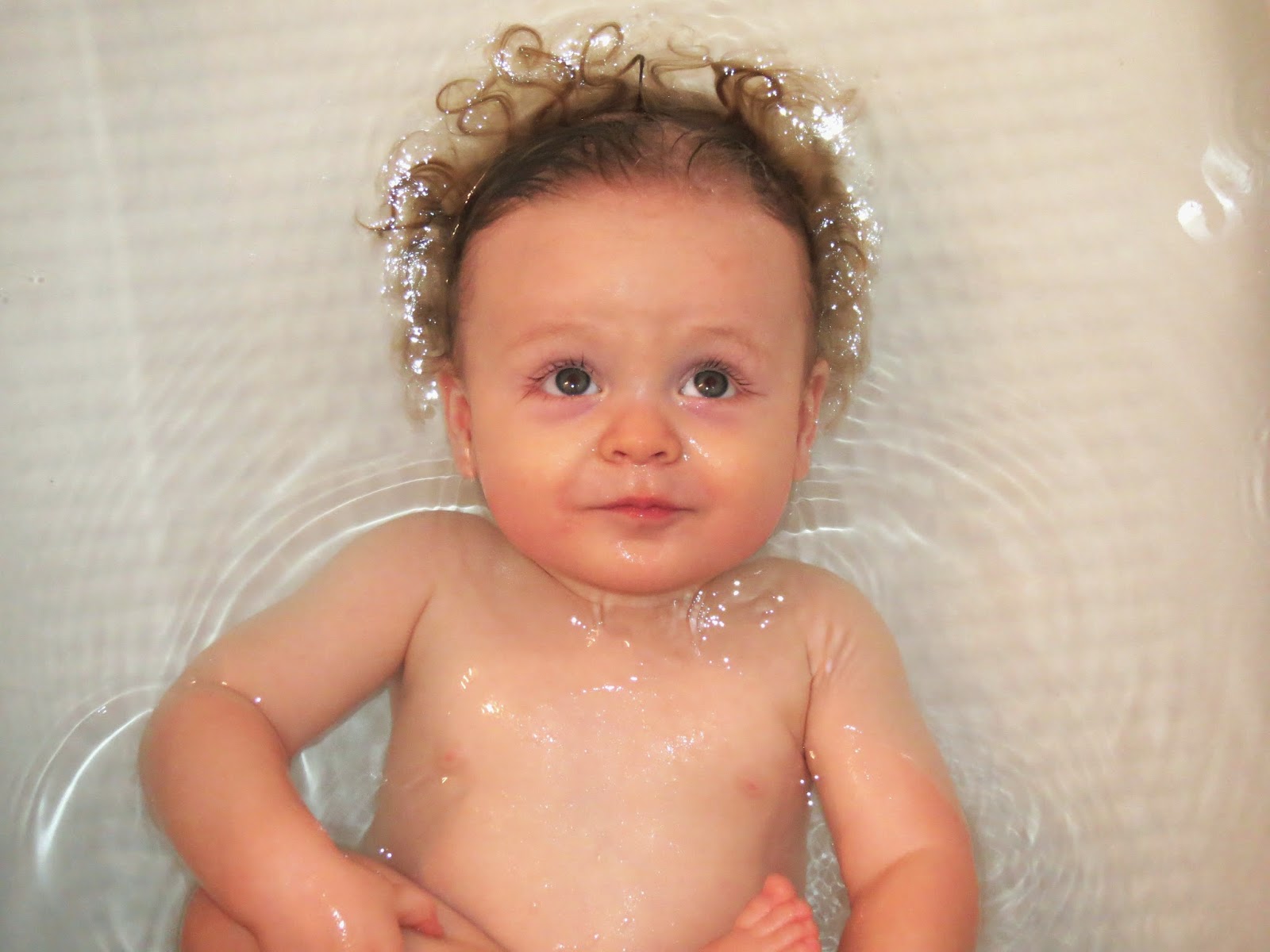 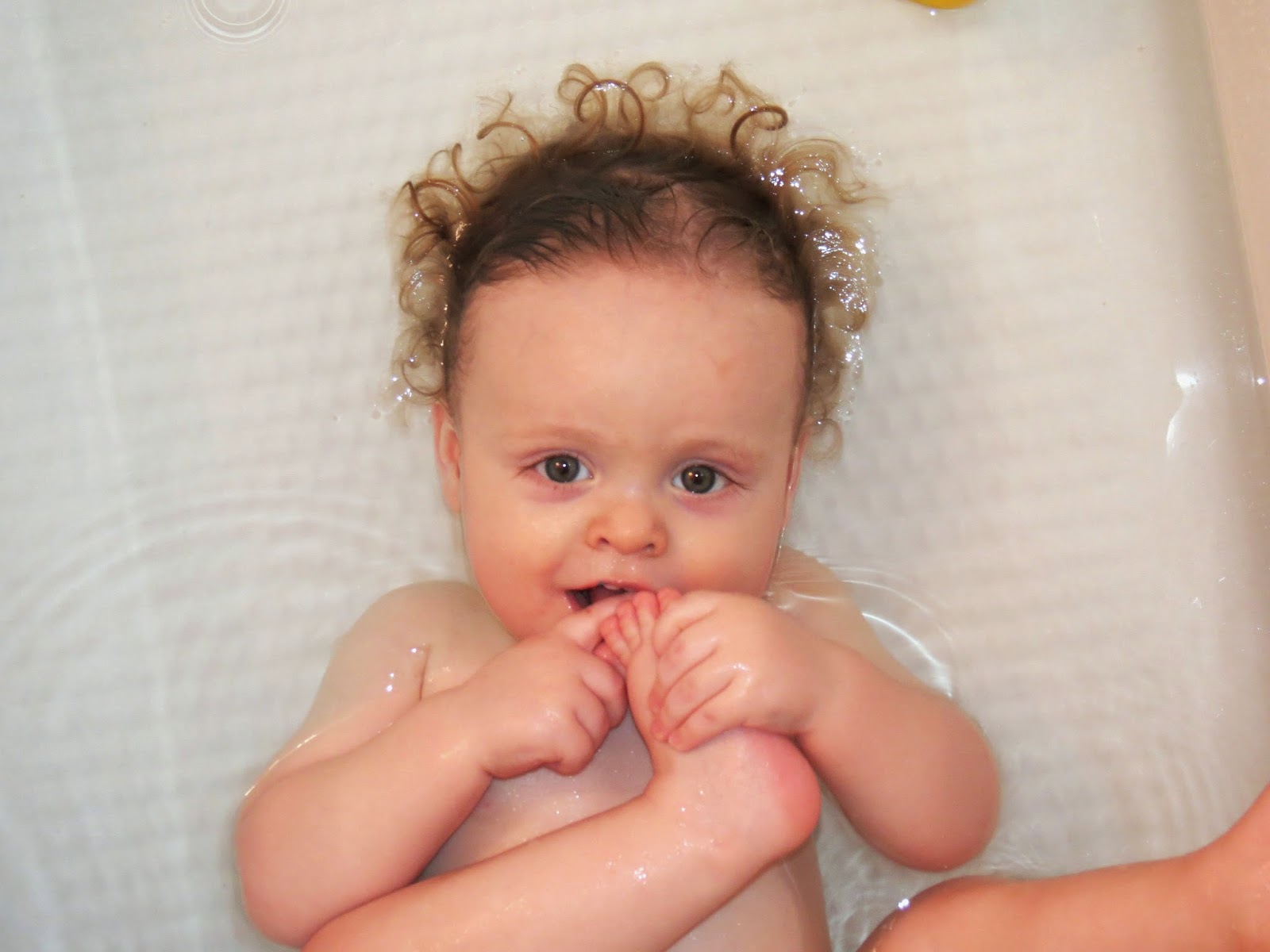 And Adina just couldn't let me close without my sharing a pic of our sunbeam... 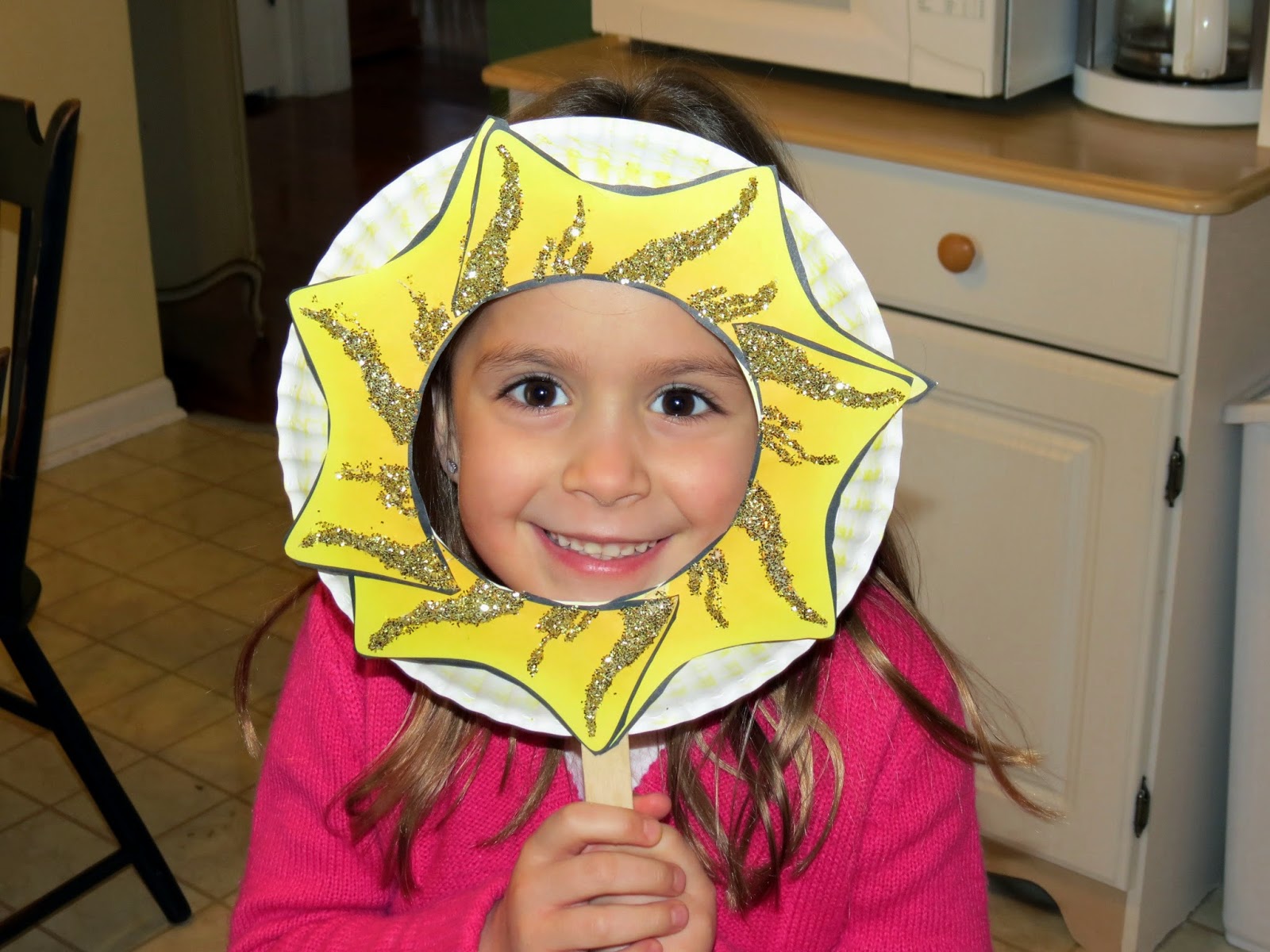 or little angels.  I just happened to say that they looked like such, when they were playing around and being silly in the bathtub one night.  But it must've stuck with her, because she reminds me of it every time she swaps her shower for a bath and has time to play with the toys.  Gotta love her! 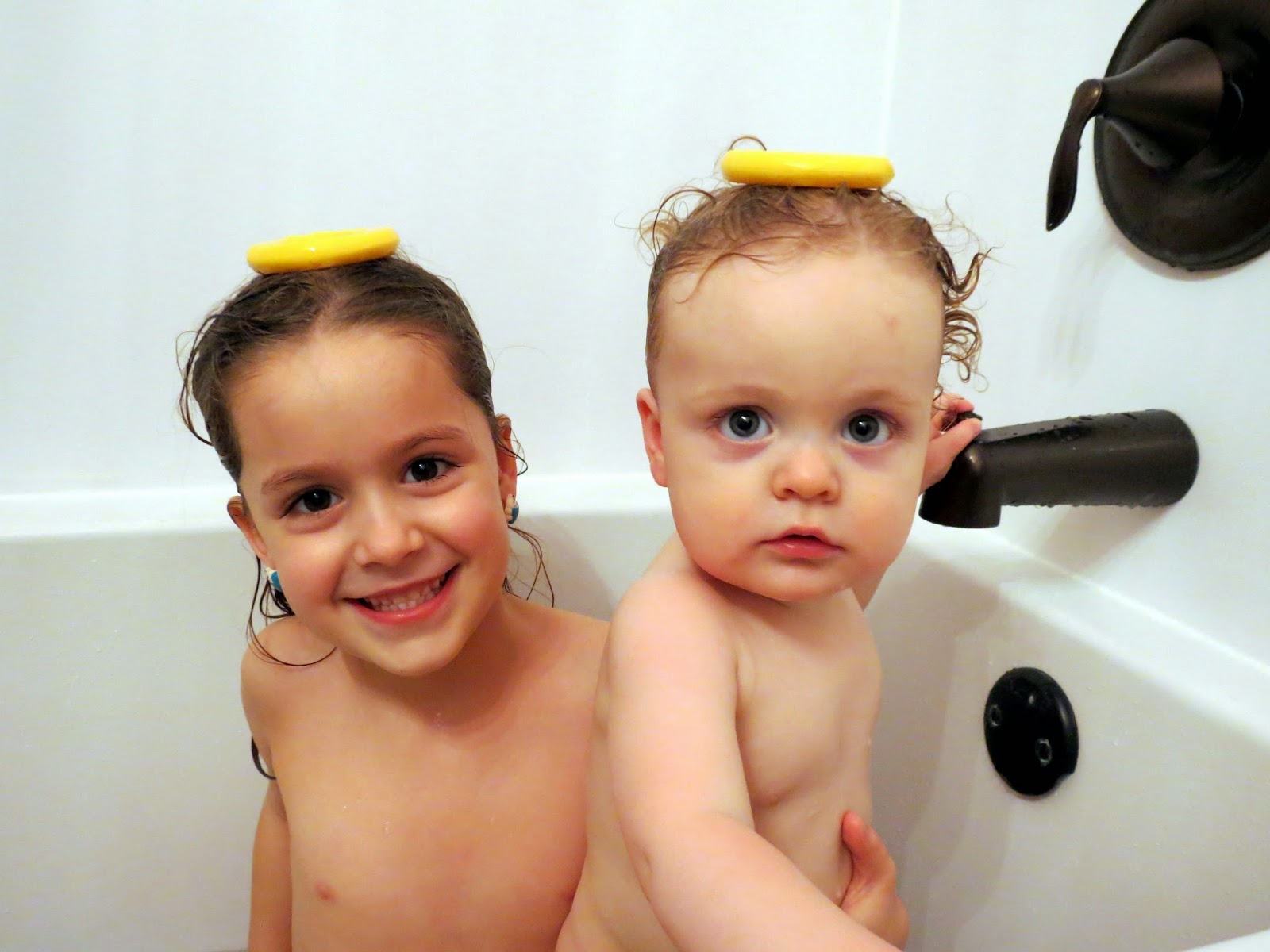 I have a few of my regular monthly posts to share this week, but it'll be pretty quiet design-wise, as I'm preparing for one particular little person's first birthday.  However, I'll have a healthy round-up to start the month of February off right.  And, of course, I'll be back on Thursday to announce a winner for my Birthday Giveaway, so be sure to get in on that.  Thanks so much for checking in on us!  Have a great week!
Posted by Jinny Newlin at 7:00 AM

So sorry you guys were all sick over your birthday, but it looks like you had a good post plague celebration!

Sorry to hear you were all sick. Love seeing the pictures of your busy family.

Loving the photos!! They are just so precious!!!!

Oh my goodness, those bath pics are too cute! And I love Adina's sunburst! I'm glad you're all feeling better, and that you had a great birthday Jinny!

What a lovely post and great photos as always ... I hope you are all recovering now ... We could use some of your weather!

Sorry to hear you and family were sick over your birthday! Your photos are so precious with your adorable kids! Looks like all of them enjoy the basketball time. The bath time photos are so CUTE! Have a great week and thank you for sharing the photos!:-)

Happy Birthday!! Lovely pics!! That baby of yours is darling. P.s. glad you are all feeling better!!!

Happy Birthday! So sorry to here you were all sick for your Birthday! I enjoyed catching up with all the happenings with your family! Your little guy is so cute! I love those Tub shots! Hope you are enjoying your week my friend!

Oh Jinny so sorry your family came down with the flu, we are still getting over the Christmas flu here. FANTASTIC photos of you and your kids. Happy Belated Birthday hope your cake was yum. My baby is teething too, but for my 17 year old baby girl it is her last wisdom tooth!