Welcome to the work week, friends!  We've got a busy one in store for us, as Ezekiel's baseball season is underway and includes a couple of days of practice each week on top of game day.  He's also got extra long band schedules, for the next few weeks, in preparation for their spring concert, and both my big kiddos are taking their Standford Achievement Tests in addition to all the day-to-day.  Like I said, it's going to be a busy week; but before all that gets underway, I wanted to stop in to share a few pics from our field trip to Kansas Speedway last week.  Our tour started in the President's box with lots of background information about how the speedway facility is used when it's not hosting one of the two NASCAR races each year and was birthed in 2001 with a Cup Series win by Jeff Gordon, as well as NASCAR stats and a question and answer session.  What an amazing view! 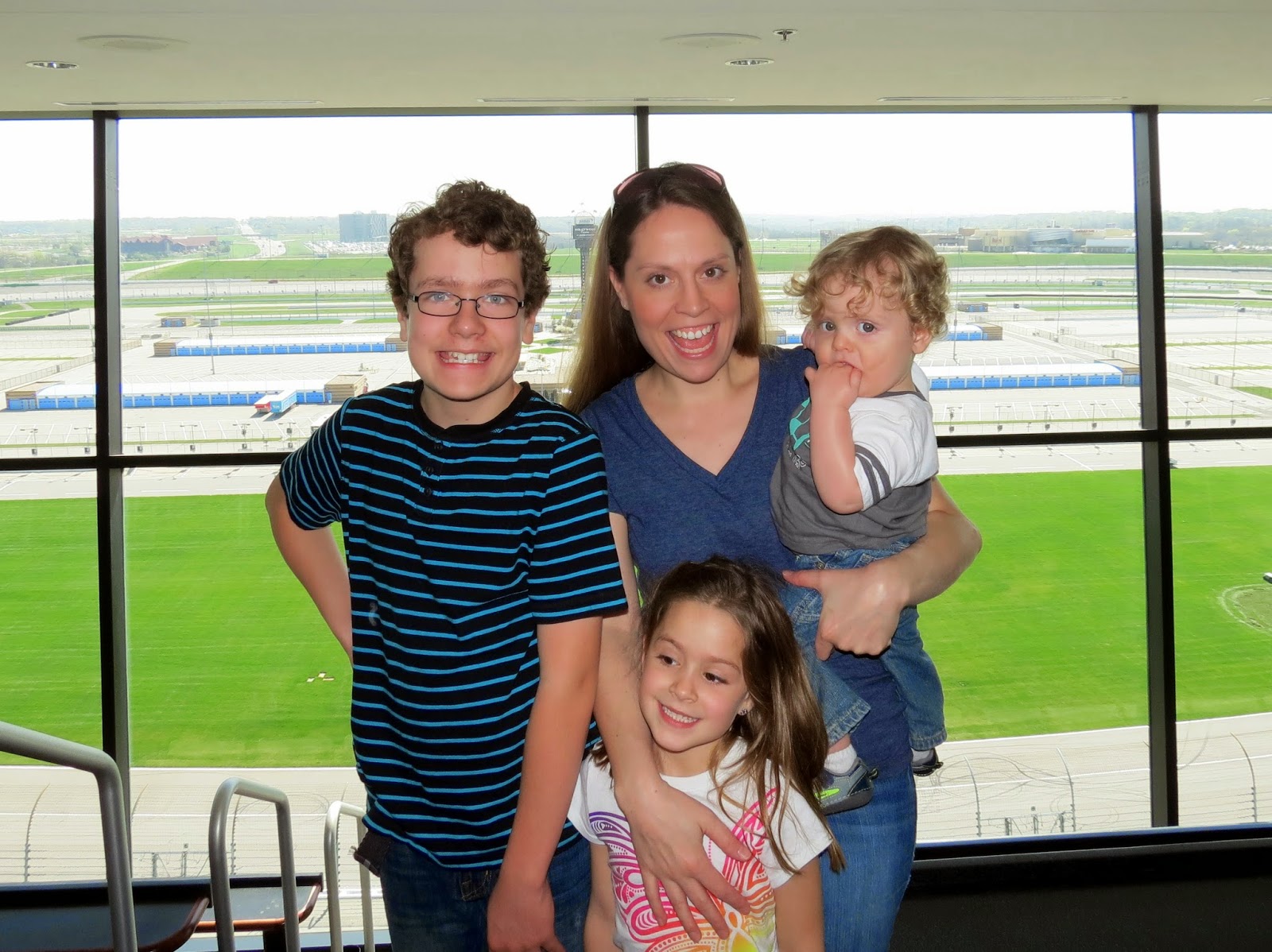 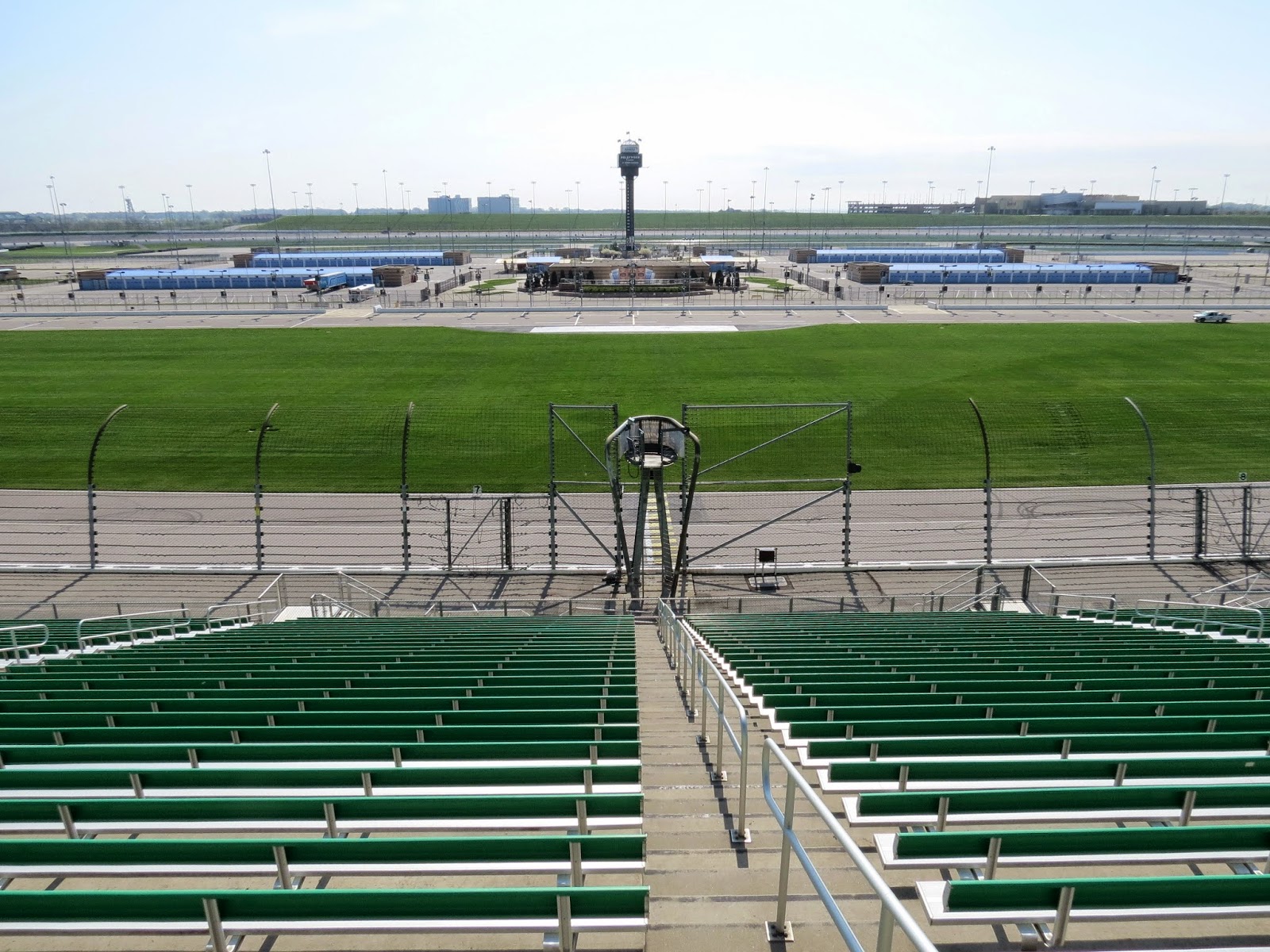 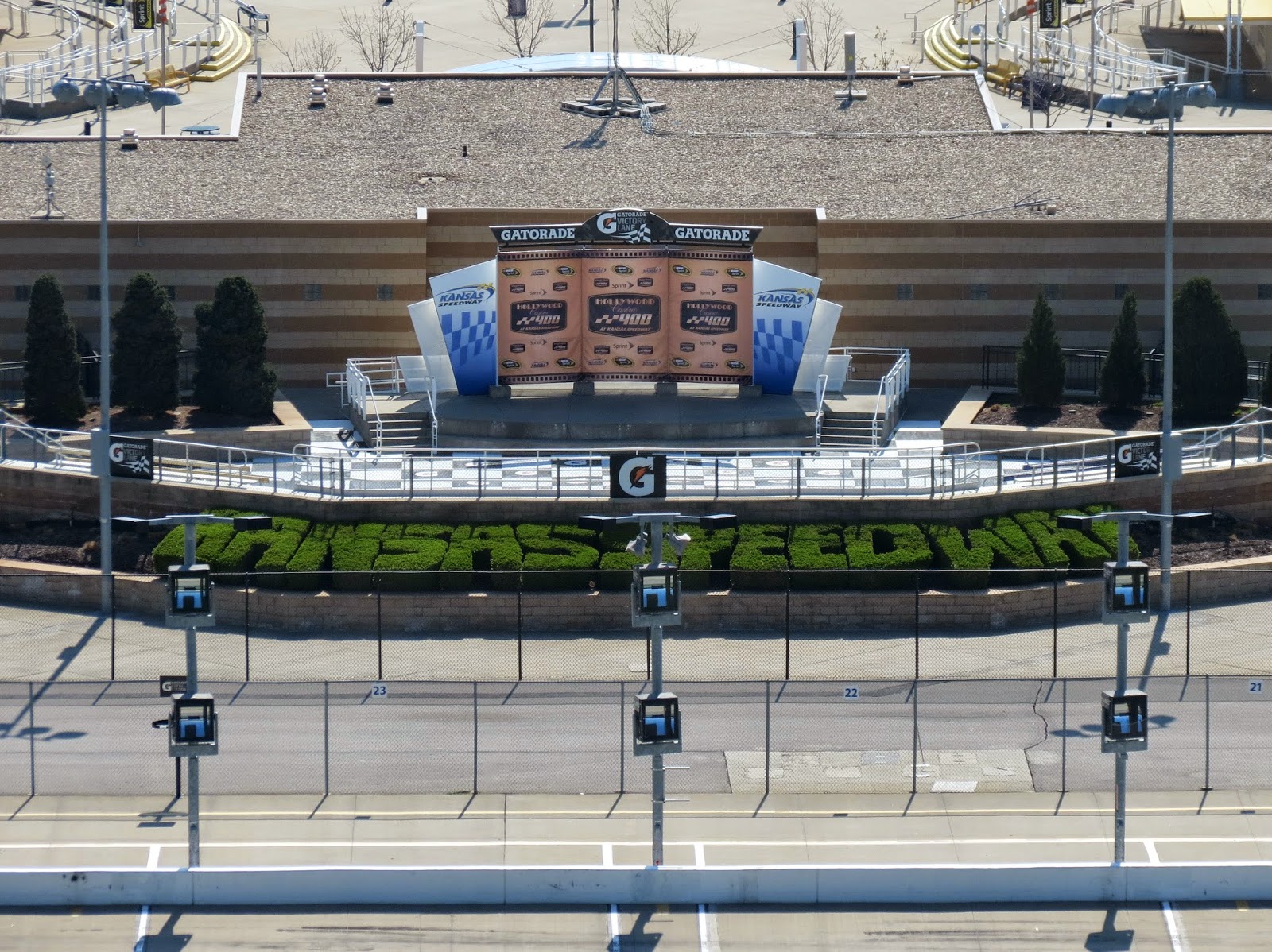 I was surprised to learn that both Kauffman Stadium and Arrowhead Stadium and their combined parking lot, as well as Sporting Park and CommunityAmerica Ballpark, could all fit in the infield alone. 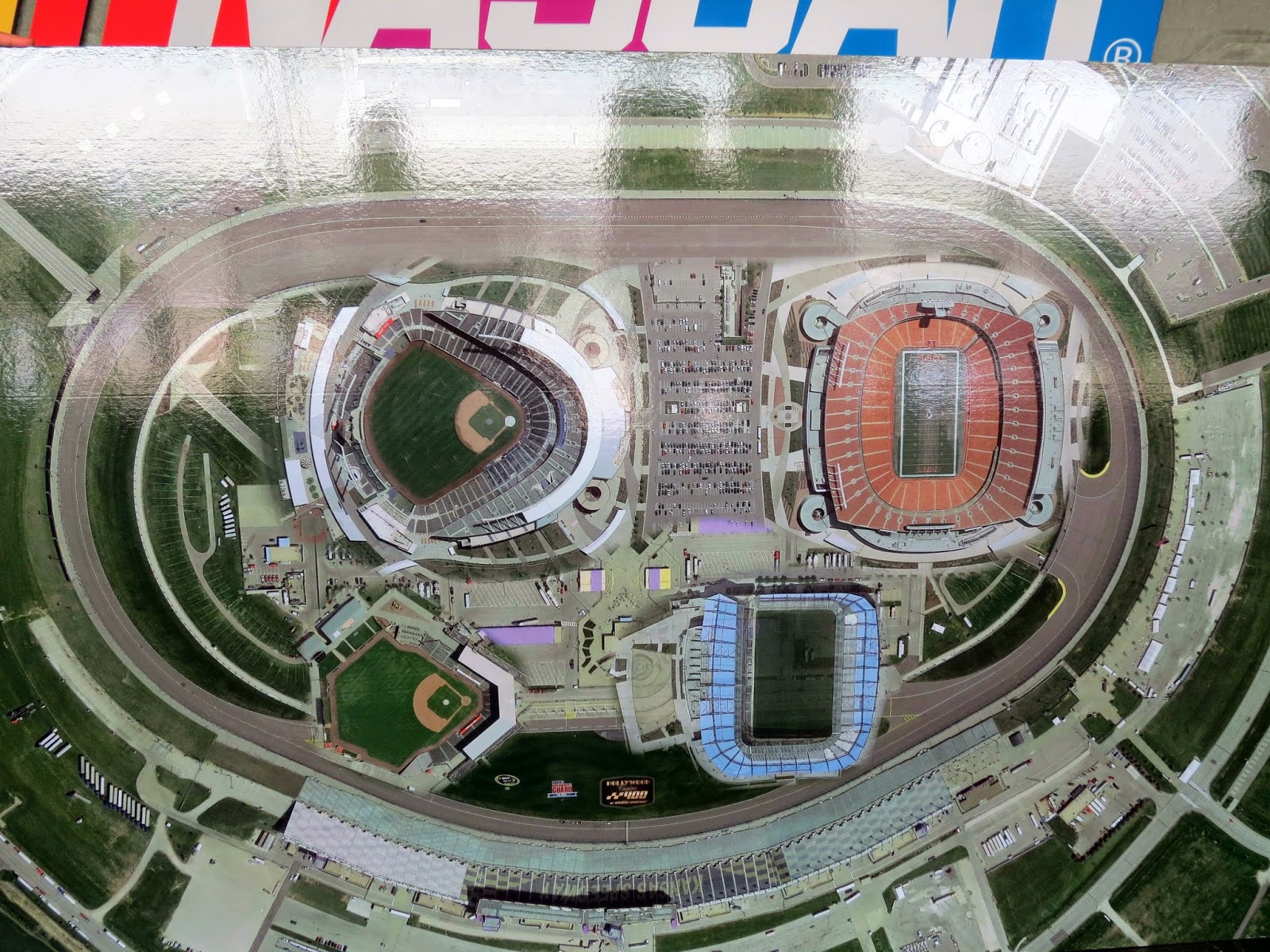 I couldn't help throwing in this ornery pic of my little bear.  Love him to bits! 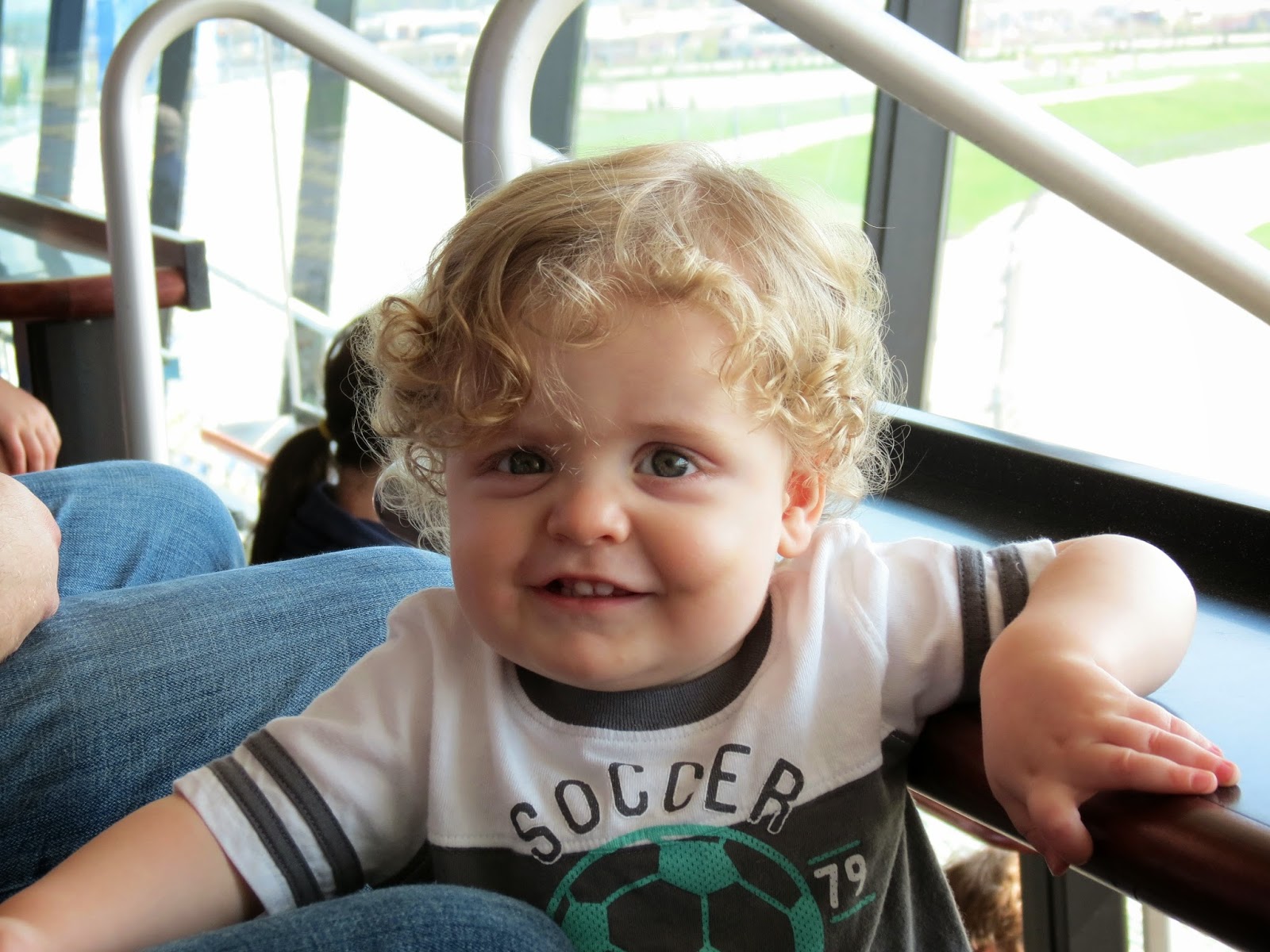 We then piled back in our vehicles to make the trek through the infield tunnel and around the 1.5-mile track. 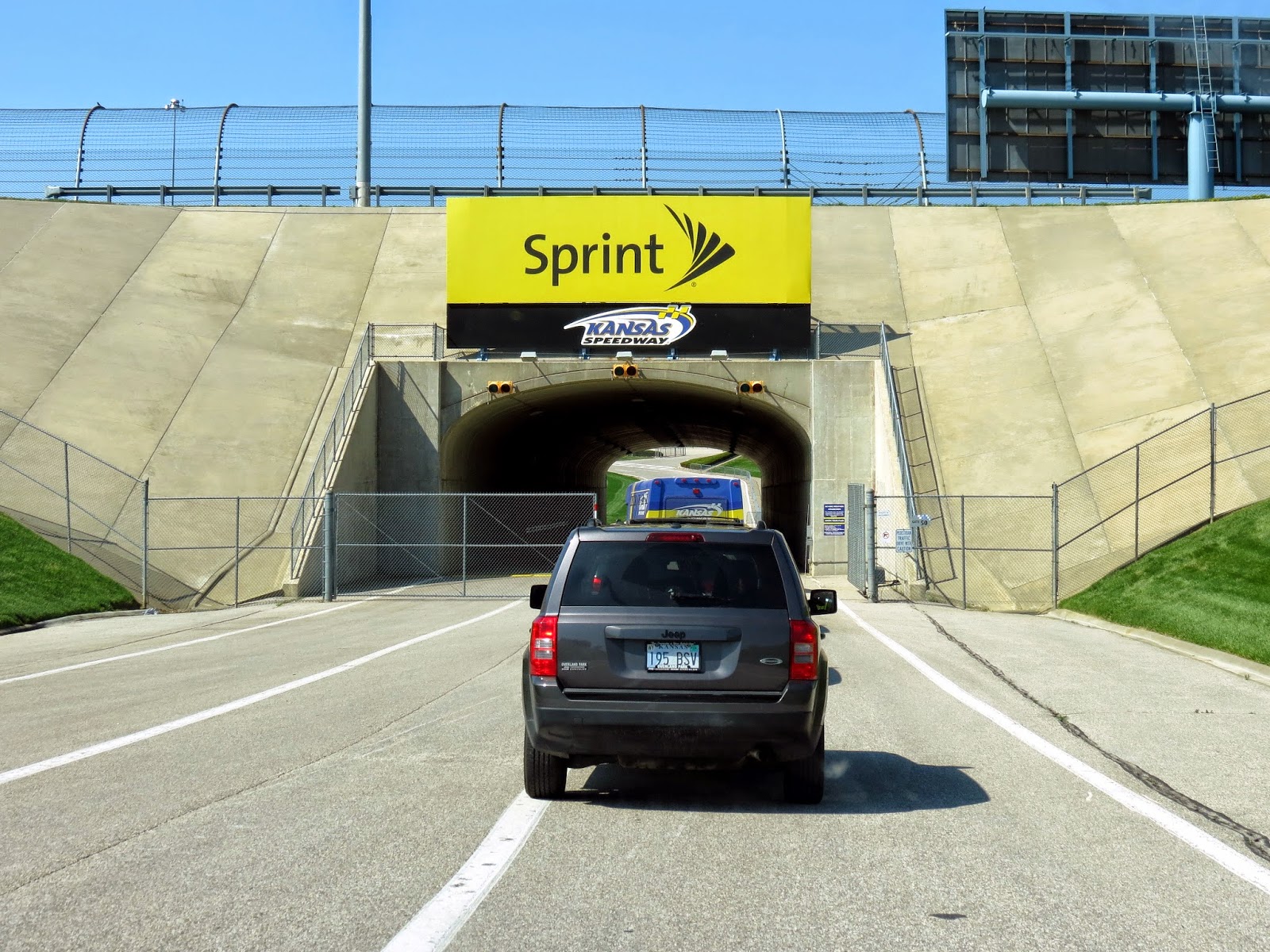 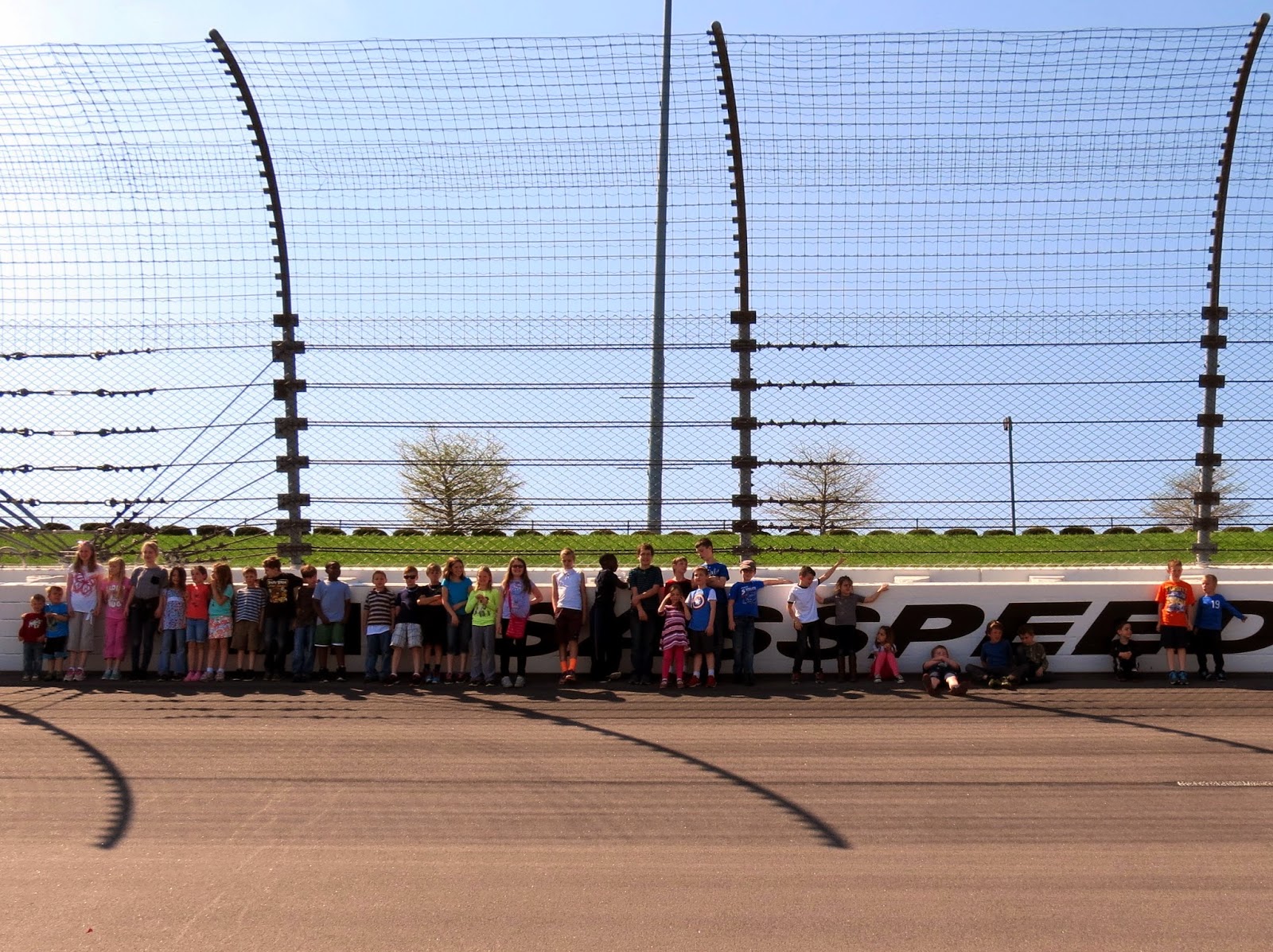 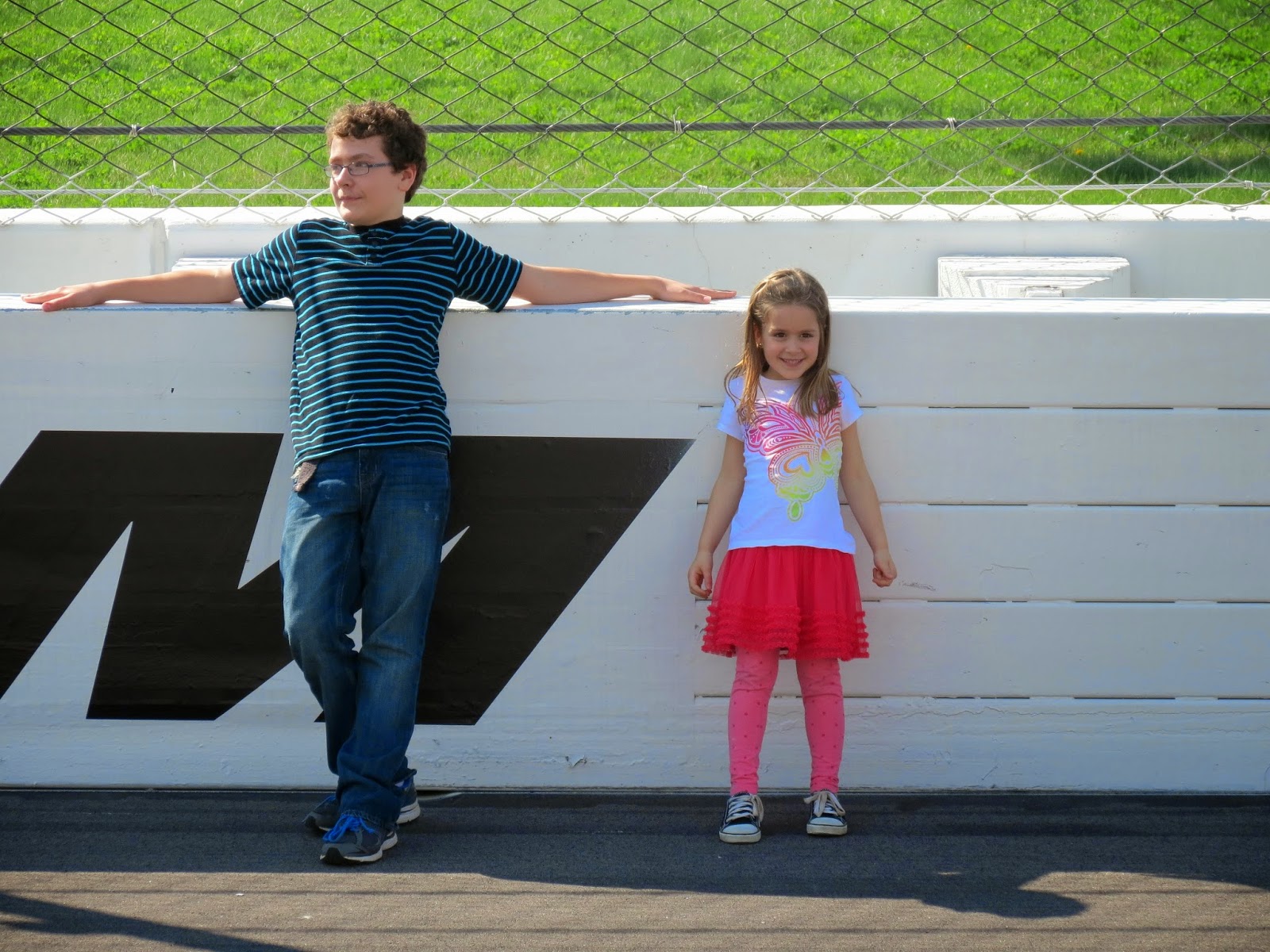 There my little lady is again, amidst all the chaos, just enjoying having a conversation with a friend. 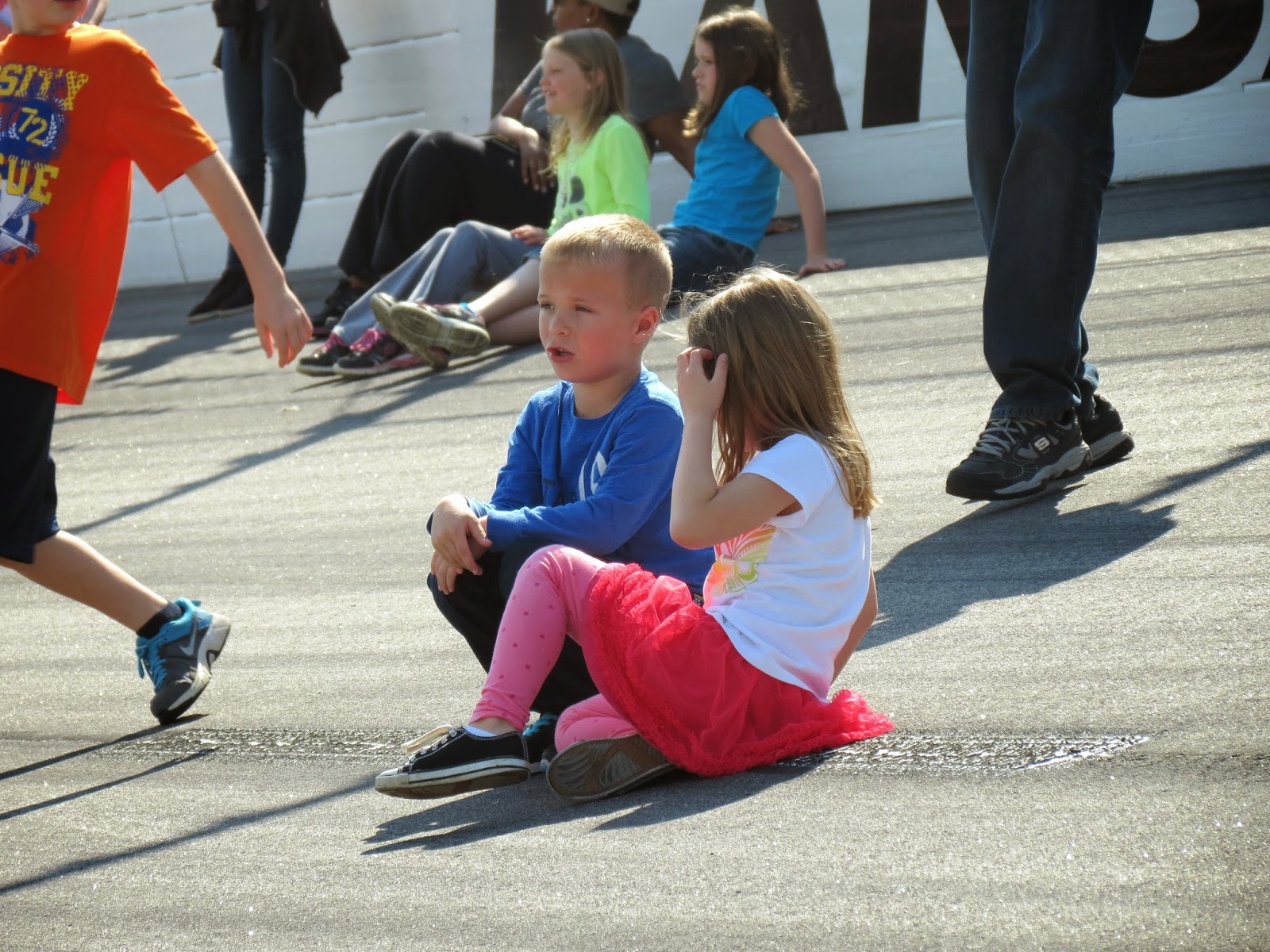 The garages were our next stop... 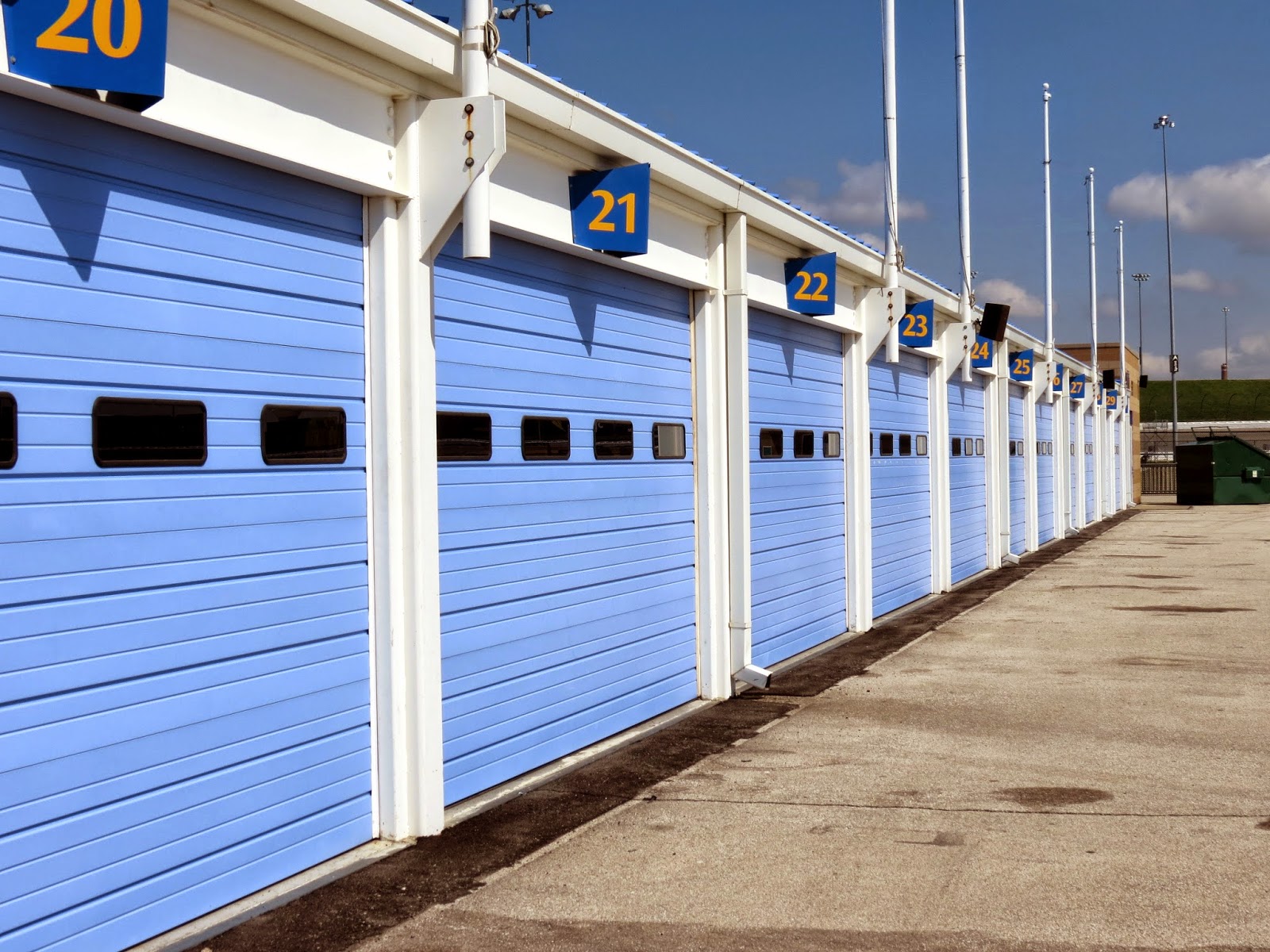 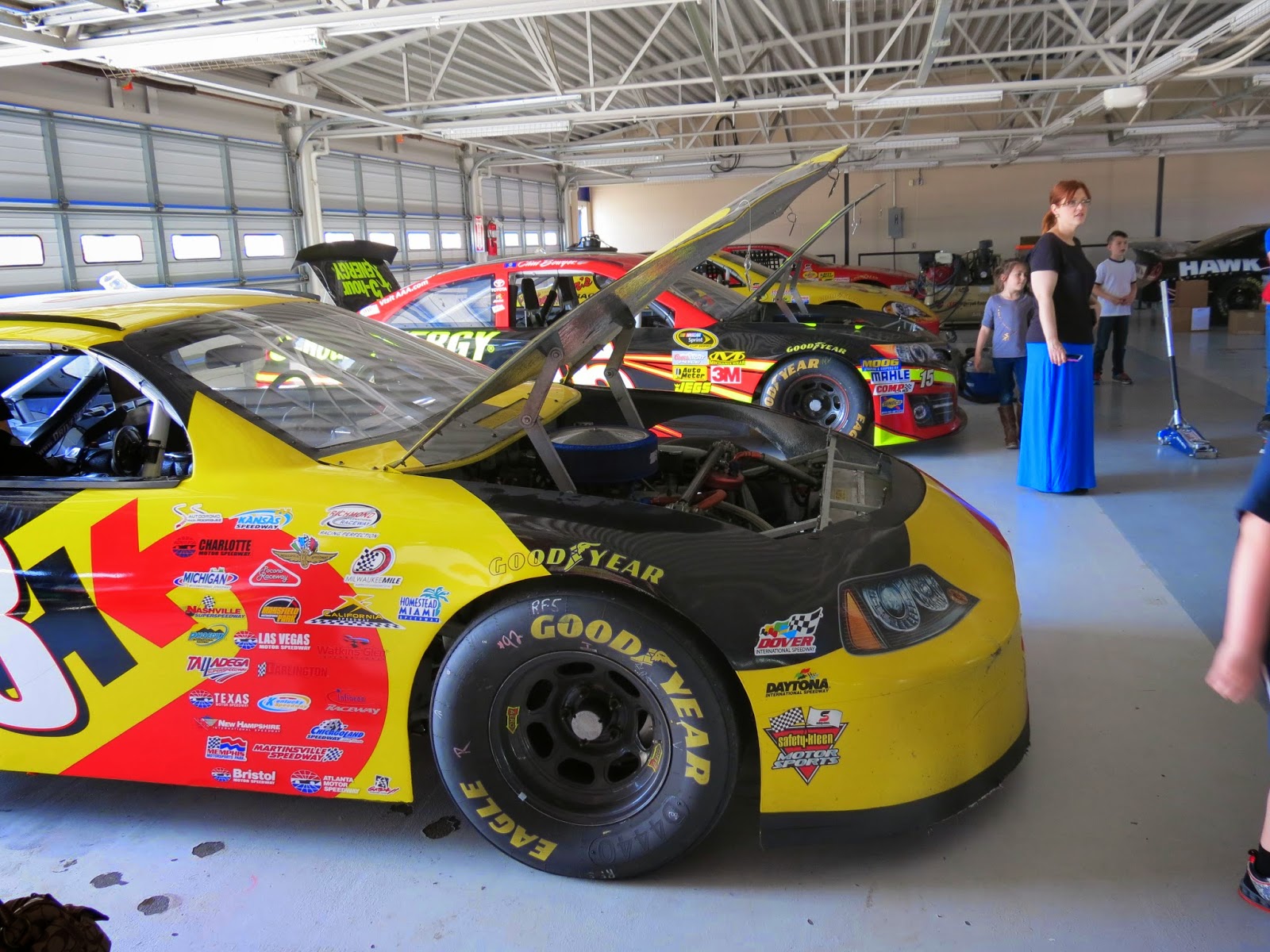 and I couldn't help snapping a pic of my family through the window of one of Clint Bowyer's out-of-commission stock cars, which is part of the Richard Petty Driving Experience, just because, even though I don't remember him from back then, he's in my high school yearbooks ;). 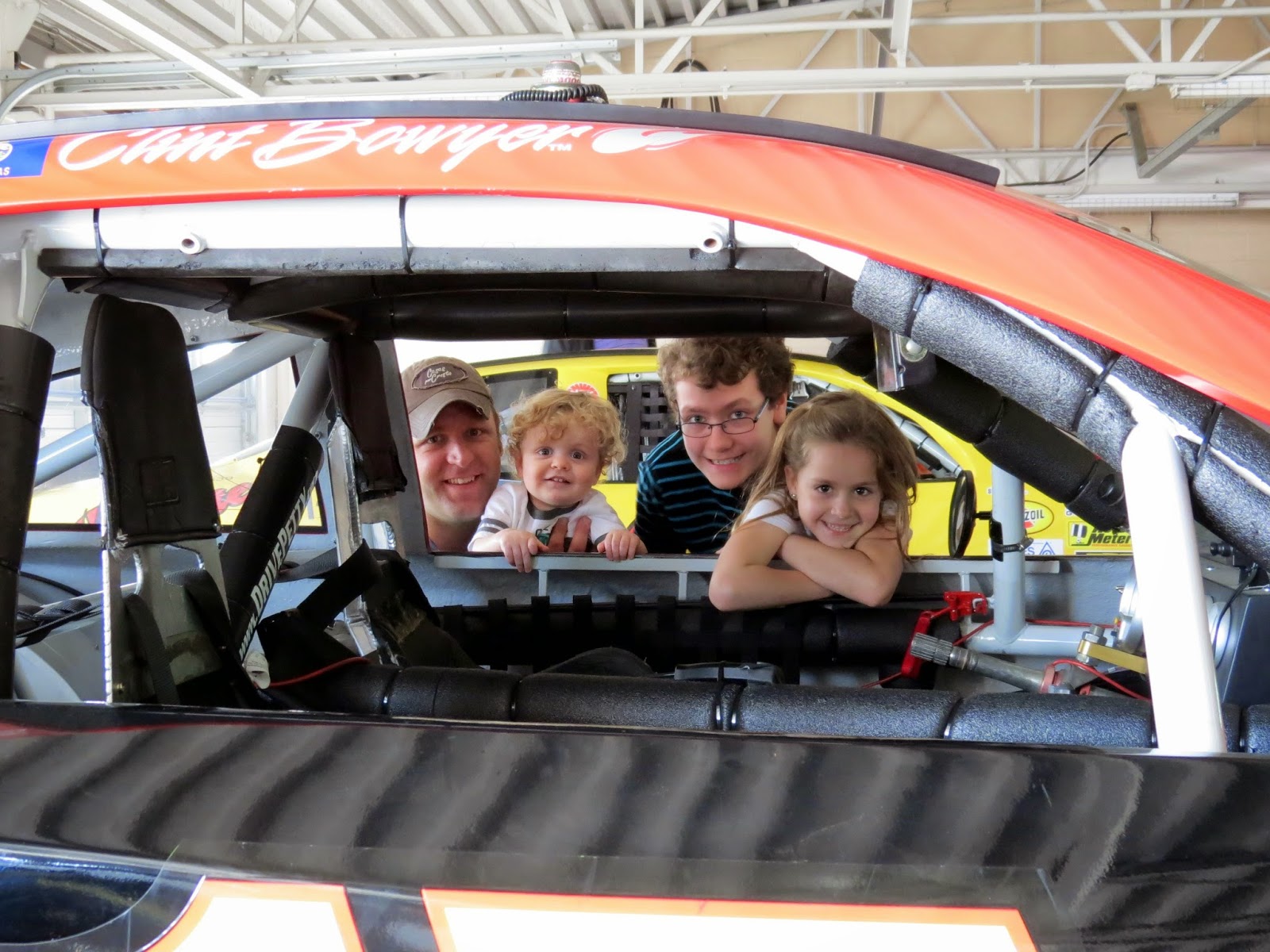 I took a few more pics of the inspection stations... 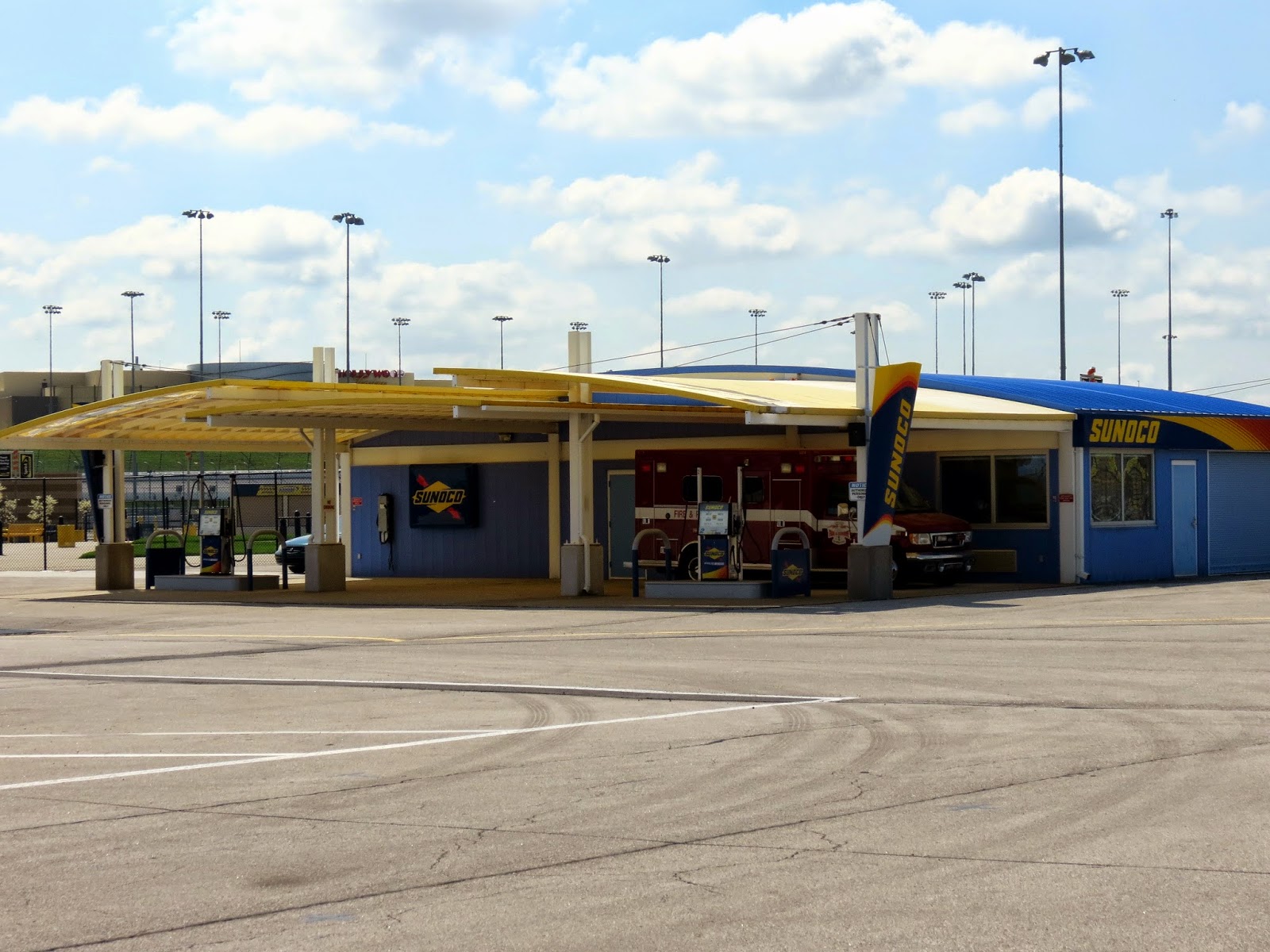 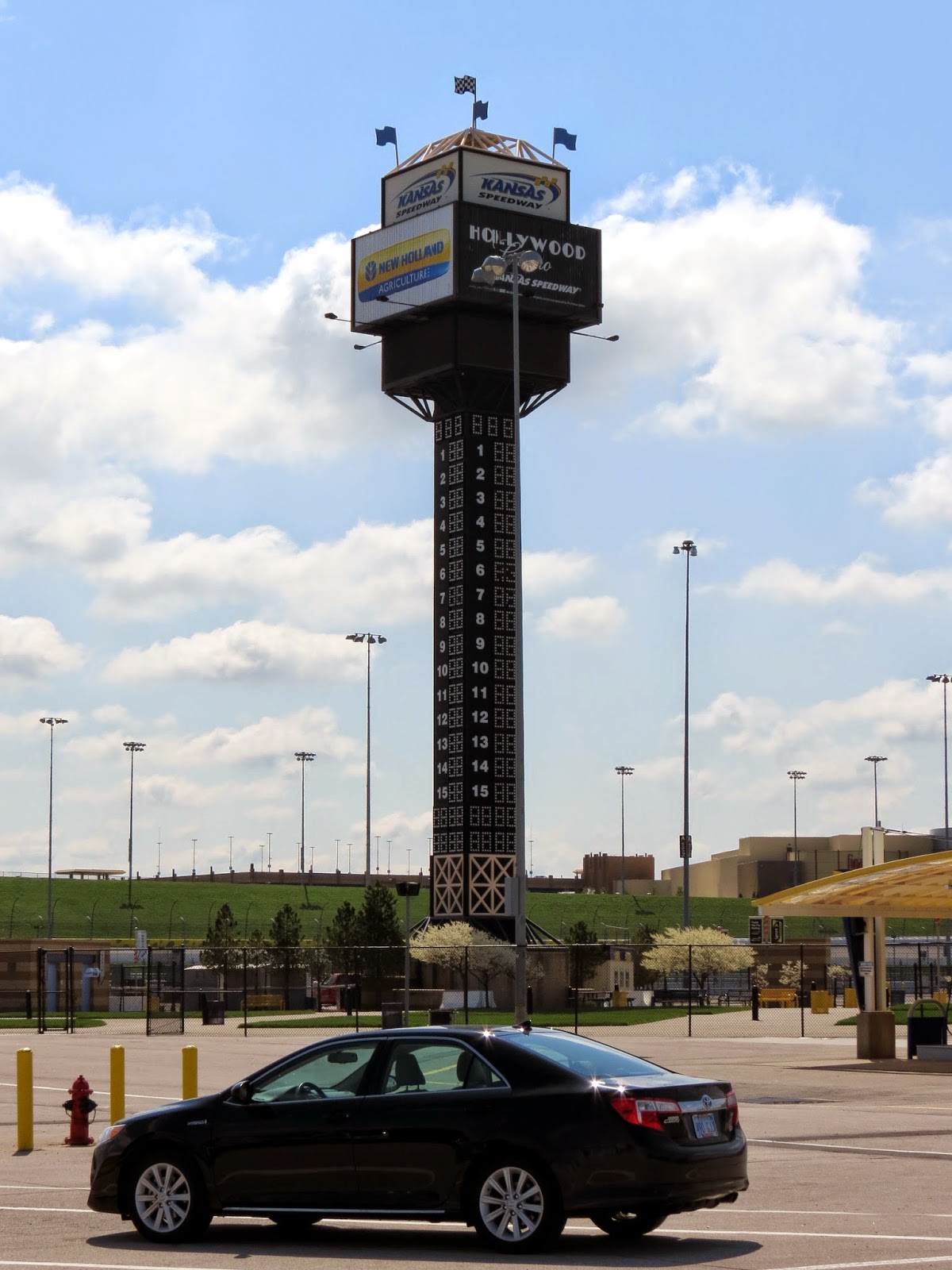 before we made our way to the last stop on the tour, Victory Lane and the Winner's Circle.  Yes, that's my girl scaling the fence and my hubby dangling our littlest upside down by his ankles.  Where'd these people come from anyway?! 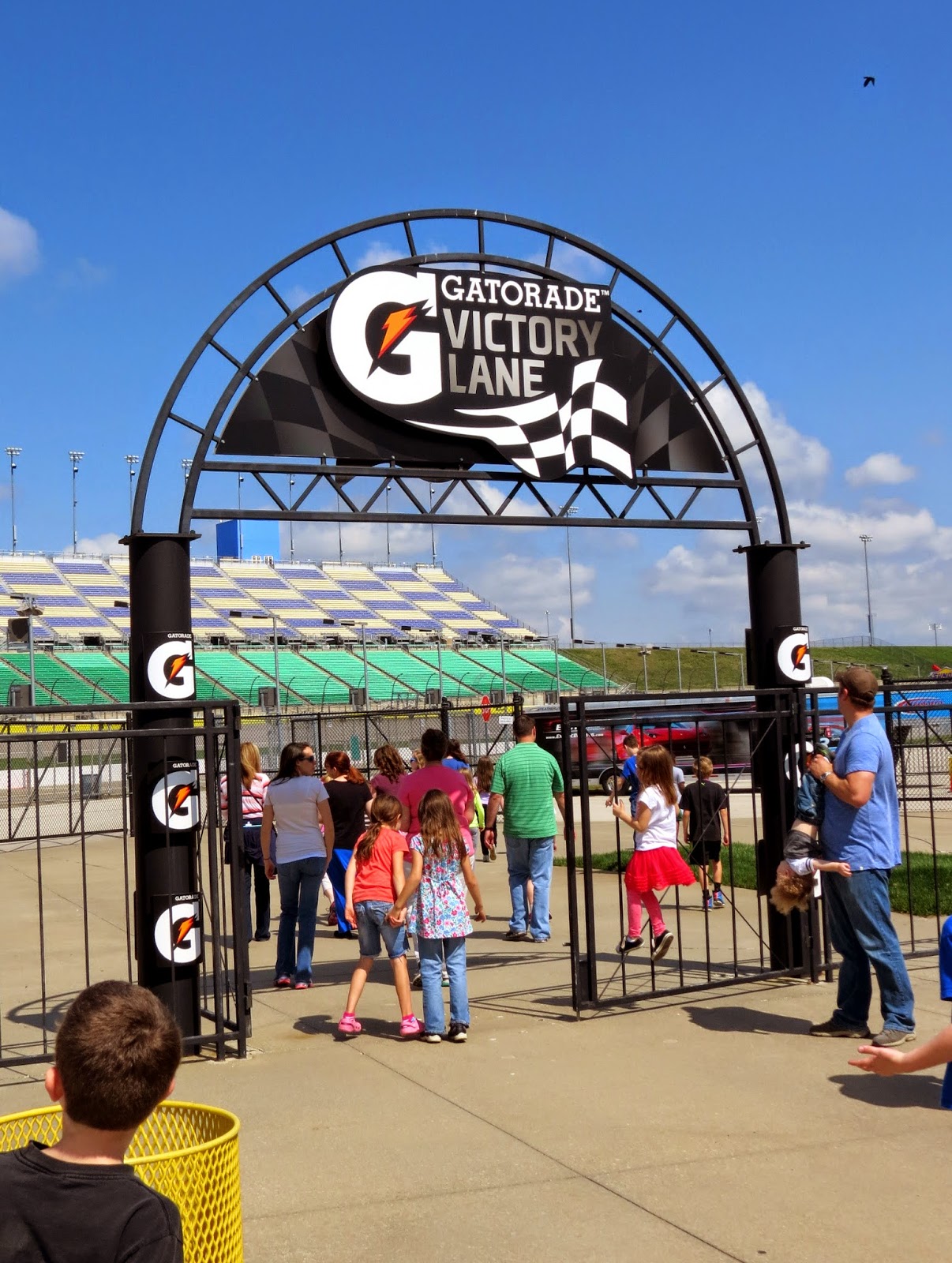 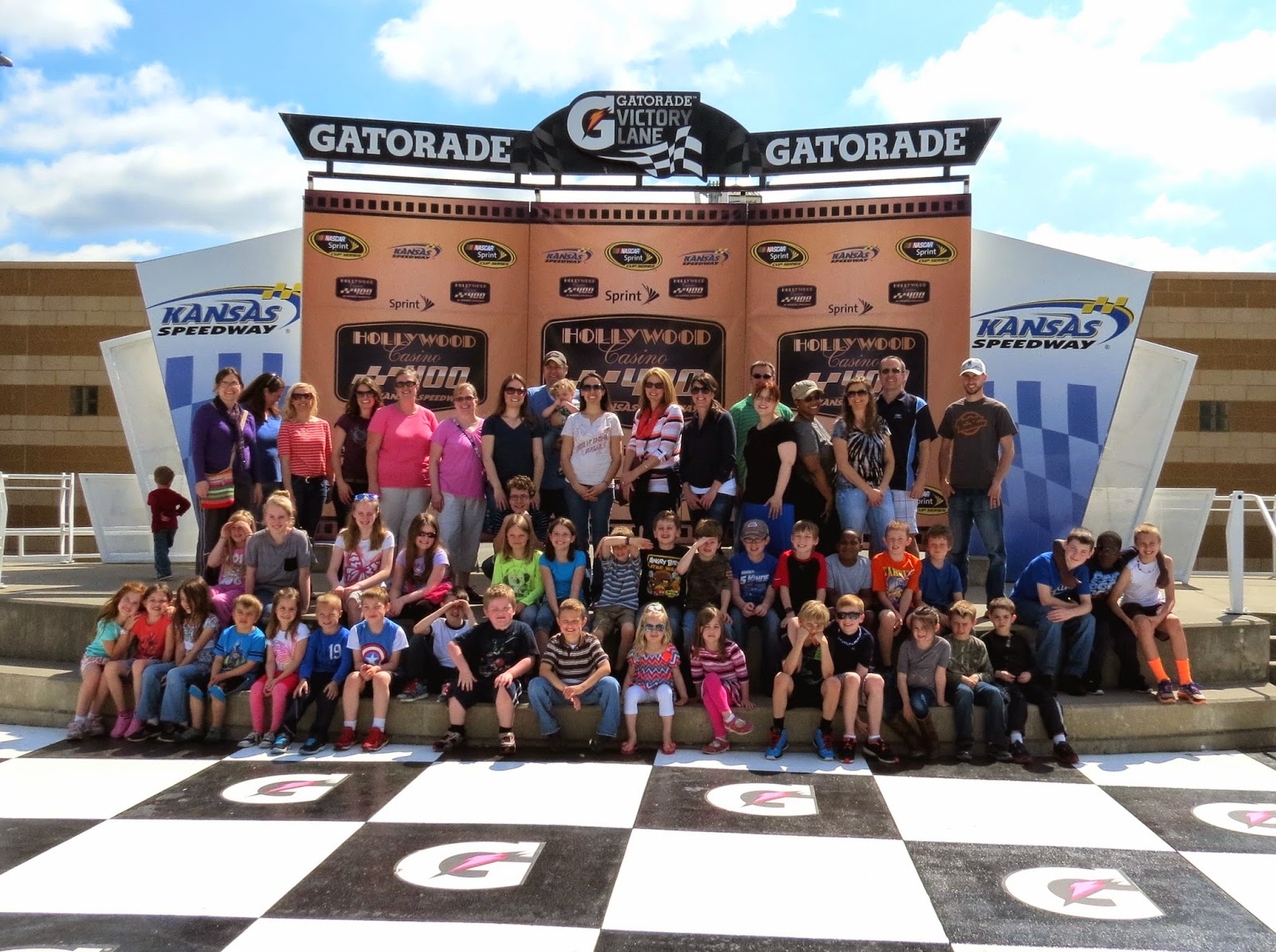 One last pic of the grandstands before heading home.  Those poles in the foreground are RV hookups, and the President's box, where we began, is in the top center.  Oh, and the lights were added, for night races, in 2011, after temperatures reached 130 degrees on the infield during a May race.  Now, all the May races are held at night here, while the October races continue to be held during the day. 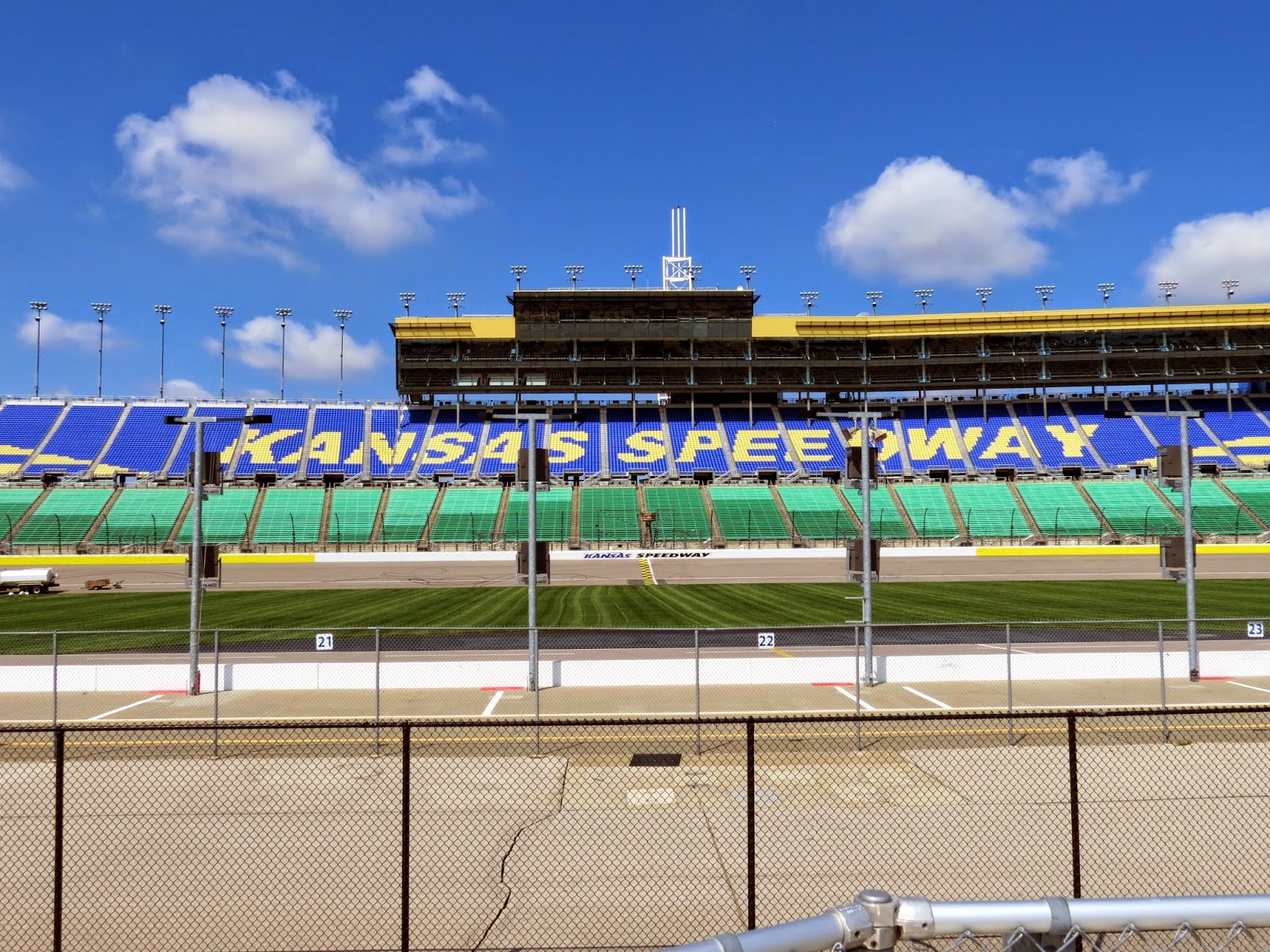 This was a great group of homeschoolers, and the tour guides were fantastic, super friendly, and full of information!  It was such a fun day, and the weather couldn't have been any more perfect.  Thanks so much for sharing in it with me!  Have a super week, y'all!
Posted by Jinny Newlin at 7:00 AM

WOW these pics are cool!! What a great time!!I bet the kids were over the top excited!!

Wow! Adam would be sooooooo jealous!! He is a HUGE NASCAR fan!!!!!!! LOVING all the photos!! I was only able to take him once to PIR to a race! But his Dad flew him out to Daytona for his 16th birthday a couple of years ago!!!

This looks like a fun filled day Jinny!! Terrific pics, thanks for sharing!

AWESOME!! We have been to SEVERAL of the Races there!! Infact we have had a similar tour and Adam even got to drive one of the Race Cars on the track going up wards of 100 miles an hour!! AHHHH!! It was such an AMAZING Experience as an adult, so I can ONLY imagine how AWESOME it was for all the kiddos!! =) LOVE the Pictures!! THANKS for sharing and have a FABULOU WEEK!! =)

Looks line an amazingly fun time! I love all of your beautiful photos!

Lovely photos Jinny ... Thanks for sharing a little bit of Kansas

Great pics! I love the photos!

Looks like lots of fun, Jinny!! Love the picture of you and your kiddos. The one of your hubby and kids peaking through window is so cool. And yes, your little guy is darling!! thanks for sharing!!

Wow! What a fun trip to the race track! Look like you all had a great time! Awesome photos...thanks for sharing!:-)