I'm super excited to be here this month sharing one of the books that I read aloud to my daughter this summer, but even more so because my big kiddo overheard bits and pieces of our reading together and decided that he'd read it himself and use it for one of his practice reports this summer.  He's such a good writer, but when he has to add doing so on top of all his other school work, he has a difficult time prioritizing and putting forth his best efforts.  So, I had him practice writing this summer in hopes of it coming a bit easier to him when he has to do it for a grade come this school year.  Unfortunately, it doesn't seem as though that plan has worked out for me.  While his writing has improved, he still postpones until the last second and drags everyone else into his "I didn't have time!" drama.  Ugh!

Anyway, with his permission, this month's For the Love of Books post comes from his very own hand-penned words.  It's not perfect by any stretch of the imagination, but I still think he has a good summary of the story; and with the exception of the lack of a concluding statement, he followed his other specifications perfectly.  This is a story of determination, redemption, and love and is written for children ages eight to twelve.  Enjoy! 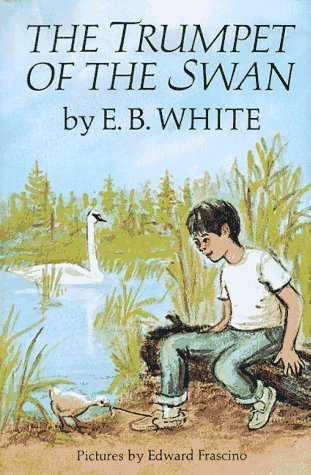 The Trumpet of the Swan is written by E.B. White.  This fiction book has 210 pages and takes place in Canada.

Louis the Trumpeter Swan was born on a small lake in southern Canada.  As charming as he was, unfortunately, he was born without a voice.  In an effort to communicate with the other swans, Louis learns to write but is disappointed to find that most swans cannot read.  He is even more disappointed when he could not talk to Serena, the swan he loves.  Feeling sorry for his son, Louis' father gets Louis a trumpet by stealing it.  To get his father out of debt, Louis uses the trumpet to earn money by being a camp bugler, playing music for the swan boats in Boston, and playing at a country club in Philadelphia.  After about a year, Louis was able to give his father the money and leave with Serena to start their own family.

I learned that the more you practice the better you will get.  Louis practiced the trumpet and was able to play many pieces of music.  I also learned that you should not try to get money fast.  You should instead work hard to earn it.  Louis worked hard and earned $4,420.78.

I like this paragraph because it shows how much Sam Beaver, a boy who watched the swans and helped Louis, liked birds.  It happens when a fox is attacking Louis' mother.


Just as the fox was about to spring and sink its teeth into the swan's neck, a stick came hurtling through the air.  It struck the fox full on the nose, and he turned and ran away.  The two swans couldn't imagine what happened.  Then they noticed a movement in the bushes.  Out stepped Sam Beaver, the boy who visited them a month ago.

I thoroughly enjoyed the book.  It was very funny and humorous.  I like the way the author shared the characters' feelings.  It was very descriptive.  It was overall a very good book definitely worth reading.

I have read this entire book.
Ezekiel Newlin

Thanks so much for taking time out of your busy schedules to visit!  Enjoy a good book today!
Posted by Jinny Newlin at 7:00 AM