Here I am sneaking in another good read just before the close of the month yet again.  Sometimes, I get carried away with life in general and simply lose track of time; but I'm truly just so happy to continue this monthly post.  I hope you all are enjoying my picks.  Without further adieu, this month's pick won The Caldecott Medal, in 1996, for its deliciously playful, strikingly vibrant, and simply adorable illustrations and is written for children ages four to eight. 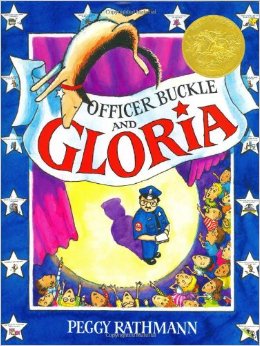 In Officer Buckle and Gloria, by Peggy Rathmann, Officer Buckle knew more safety tips than anyone else in Napville and shared them with the students at Napville School; but nobody ever listened, and accidents always ensued.  That is until Gloria, the police dog, joined his team.  Unbeknown to Officer Buckle, Gloria acted out each safety tip he gave and received unending laughter and applause from the previously snoozing audience.  So much so, that they began to get invited to give more safety speeches.  Together they visited 313 schools, and everywhere they went, to Officer Buckle's surprise, the children listened.  Then, one day, a television crew videotaped Officer Buckle's speech, and the rationale for their instant popularity became disappointingly evident to him on the ten o'clock news.  The pair were forced to go their separate ways, but when disaster struck Napville School, they were drawn back together again with Officer Buckle's best safety tip yet.

I'll be back tomorrow with a creative, new palette from Colour Me...!  Until then, thanks so much for visiting, and happy reading!
Posted by Jinny Newlin at 7:00 AM