Afternoon, friends!  And happy Monday!  I'm a little slow getting things going today, as we had another late night watching our boys in blue play for the crown.  This time, they got it done... in 14 innings, but they got it done none-the-less.  Woohoo!  What an exciting time for Kansas City and the Royals baseball club!  I think I mentioned last year, when they made it into the World Series, that the last time they won, I was only seven-years-old.  Well, my Adina turned seven-years-old yesterday, and the Royals won the World Series.  Eeek!  Why did it have to take her so long to turn seven ;)?  She said that she hoped it didn't take until her daughter was seven-years-old for them to win again.  LOL!  Me, either! 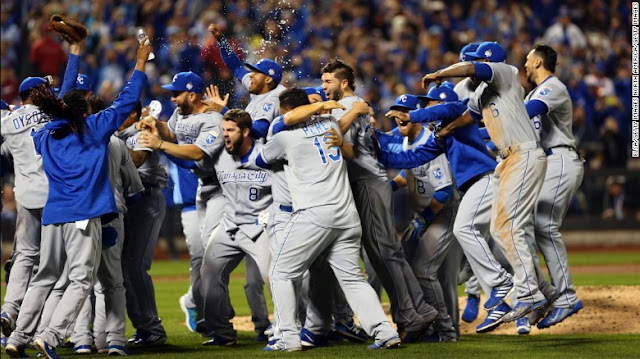 Photo Credit
So, how about some pics of my little lady's birthday celebrations?  We had church in the morning and are still trying to get used to the much longer morning service they have at our new church.  So, we were all starving by the time we finally got to Red Robin, Adina's chosen birthday lunch, even after munching on the few extra, oatmeal raisin cookies Adina had taken to share with her Sunday school class. 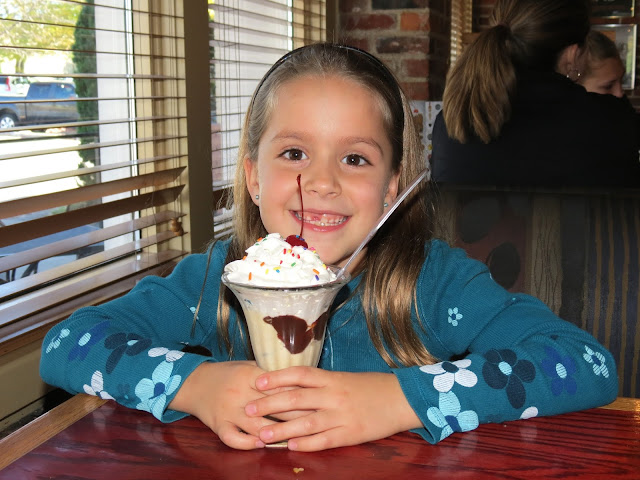 Then, we drove a little ways to pick up her first birthday gift... a darling, pet bunny.  She didn't even want to get out of the van when we arrived.  We were just meeting the owners in a Thriftway parking lot, and she thought we were running into the store for something.  Honestly, I'm not even sure what they sell in there... probably something cheap.  Tee hee!  But we convinced her to get out anyway, and she couldn't have been any more surprised.  She picked out Snowflake, and we were on our way home with one happy, little, birthday girl. 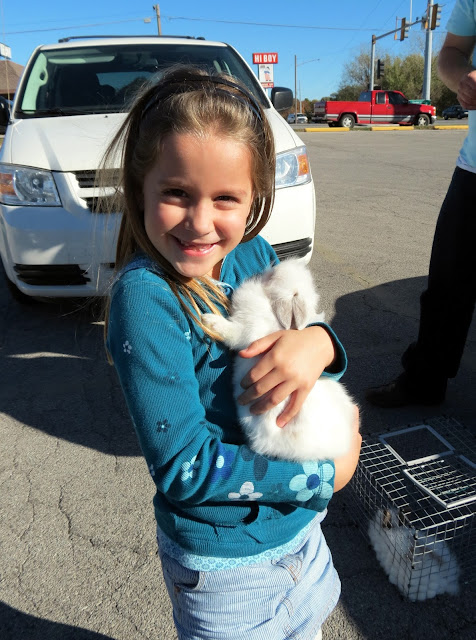 I think she would've been satisfied with just Snowflake, but we did have a couple other things for her... her first Barbie.  She's still playing with my old Barbies, but now, she has a brand new one of her very own. 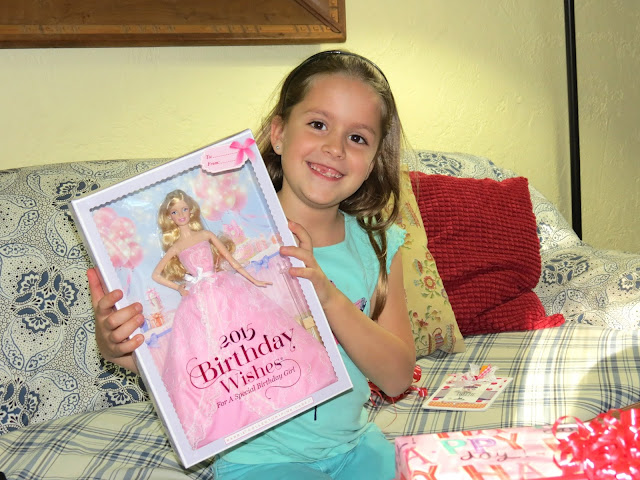 I just love these sweet moments when they actually love one another ;)... big hugs for a thoughtful gift from her big brother. 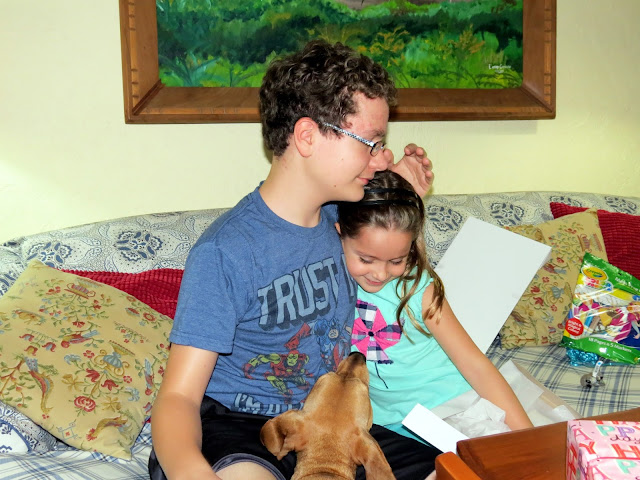 She really, REALLY needed a new pair of tennis shoes.  Why is a good pair so stinkin' expensive?!  They're worth it for that smile, though. 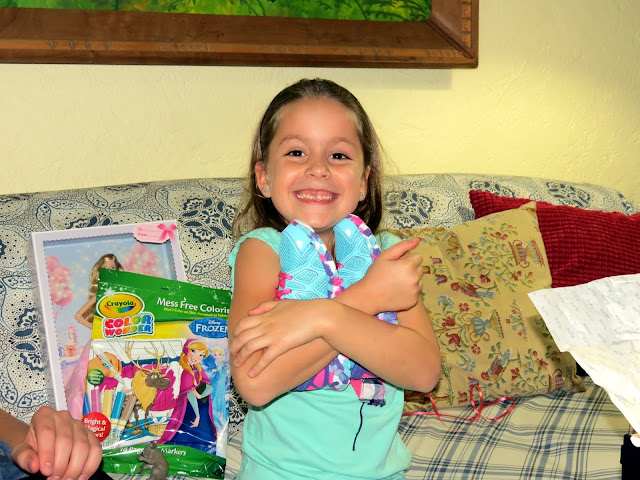 And, of course, Snowflake needed all kinds of care items, but she seems to be adjusting to her new home flawlessly. 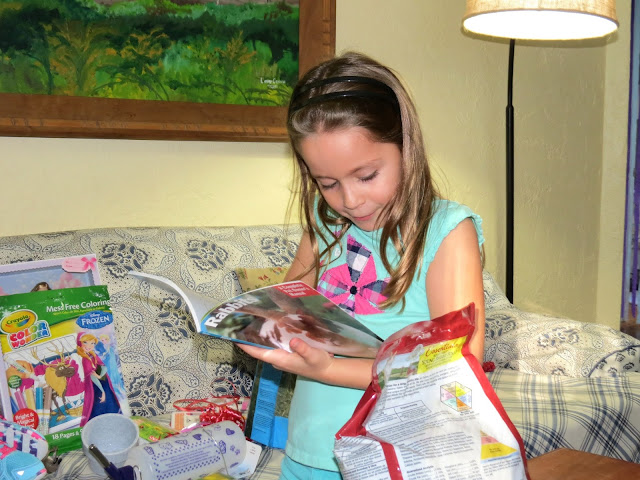 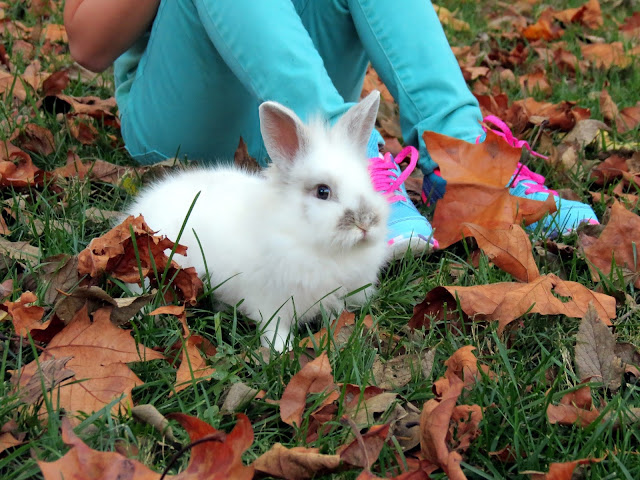 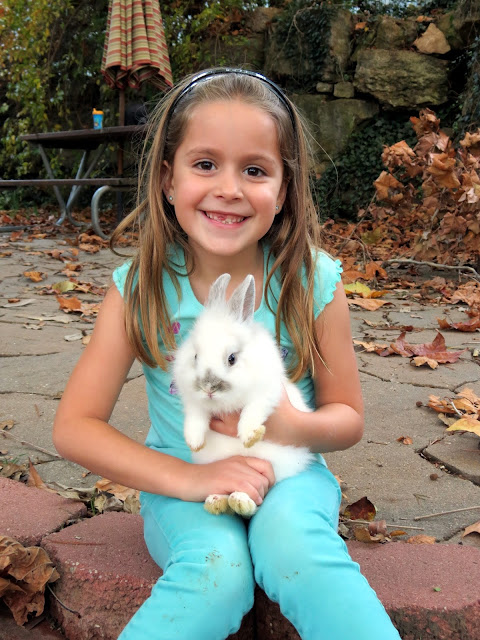 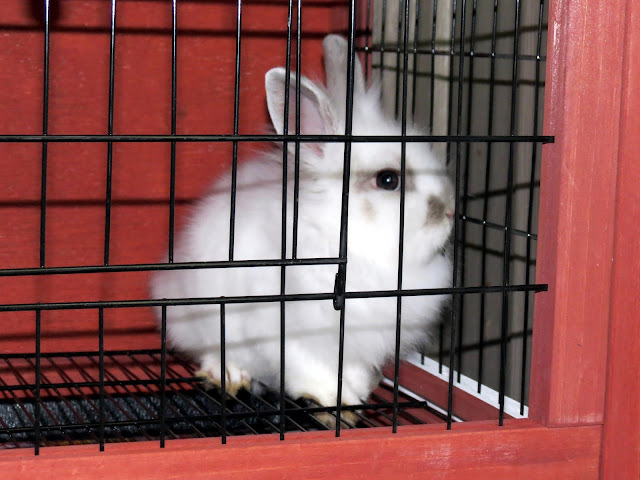 I don't know where the day went.  All of a sudden, we were scrambling to get dinner on the table and eat birthday cupcakes.  I even sent Adina to get her bath before we could begin, but Coconut Bunny Cupcakes, after dinner, taste just as delicious all ready for bed. 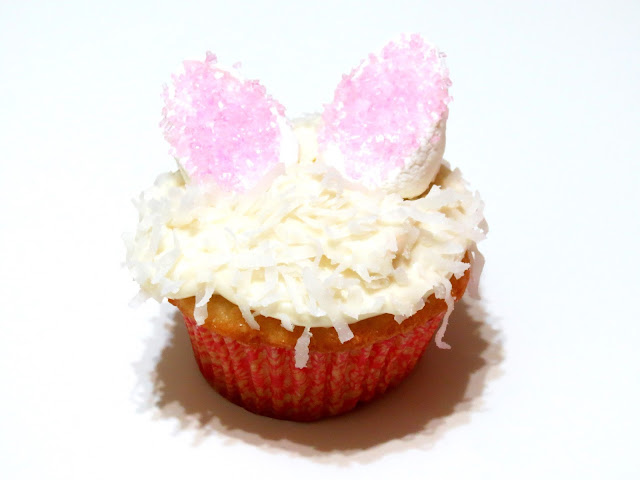 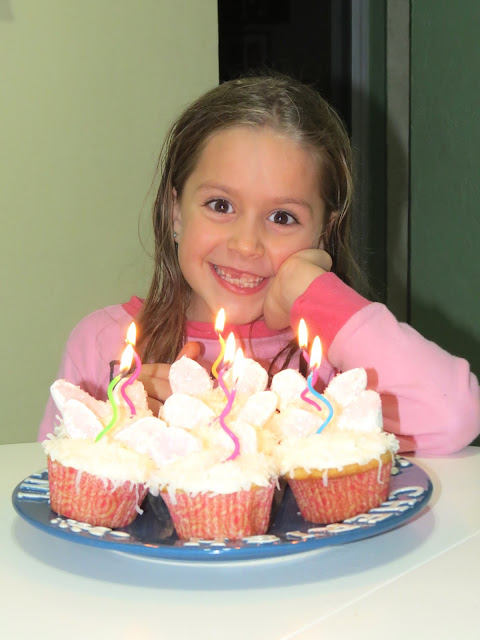 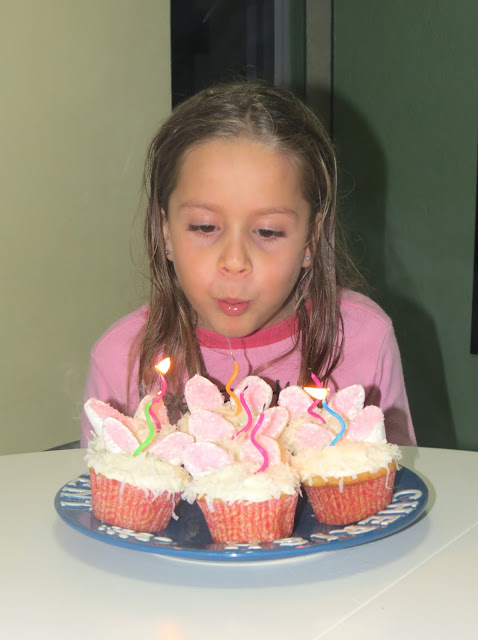 It was such a wonderful day!  Thanks so much for all your birthday wishes!  I've passed them on to my beautiful, little lady.  XOXO
Posted by Jinny Newlin at 3:08 PM

Belated happy birthday wishes to Adina!! Snowflake is adorable and I'm sure will be a happy member of the Newlin family! The photo of Adina smiling at her lit candles on her cute cupcakes sums up what looked like a wonderful 7th birthday!

Congrats to your team!! And even though I am a NY'er .. I go for Derek's old team, so I am ok with the Mets losing! LOL!!! And Happy Birthday to Adina!! She is sooooooooooooo cute!!!! And SNOWFLAKE is ADORABLE!!!!!!!!!!! I don't know if you follow Cindy deRosier ... but her family has a rabbit named Trouble and she has done some great blog posts on the care of him -- she has a search function on the side bar if you want to search her blog ... http://www.cindyderosier.com/ :)

Happy Birthday, Adina!! LOVE the pictures and Snowflake is adorable!!

Awwwww! Looks like an amazing celebration and the photos are so full of joy and happiness! Thank you so much for brightening my day! HUGS!!!!

What an absolutely wonderful birthday celebration. Happy birthday to your beautiful Adina!

Happy Birthday to you little sweetheart!! Lovely photos and what a cute little bunny!

Huge congrats to the Kansas City Royals! I watched a little bit of the one game and was hoping for them to win for you!:-) And, look at your sweet Adina, the birthday girl! Happy Birthday, Adina! Lots of smiles with awesome presents! The little bunny, Snowflake, is just too CUTE! My son had a white rabbit when he was young, too...precious memories!:-)

Happy belated birthday to your beautiful daughter!! The photos are so fun to look at, she's so happy!!