Morning, friends!  Well, we ended up at the pediatrician yesterday.  The overall consensus is that Kaden had viral pneumonia.  Fortunately, it appears as though I was a good nurse and did all the right things, because he's coming out of it with flying colors.  Unfortunately, he developed a double ear infection amidst all the congestion; but he's now taking a prescription medication, and even by the end of the day yesterday, we were already beginning to see the personality of our ornery, little critter return.  Yay!  All three of my kiddos still have that nasty cough, but fever-free days are just around the corner.  Thanks again for all your well wishes!

Anyway, I'm just popping in to share this month's For the Love of Books pick.  Many of you may recognize the name Iza Trapani.  She has authored and illustrated any number of books for children but is especially known for her retakes on old nursery rhymes.  Kaden loves to sing and is particularly fond of her books, which include the sheet music for each rhyme.  So, while I recommend all of her books, I thought it only fitting to pick our fave to share, with you all, today.  It is written for children ages two to five. 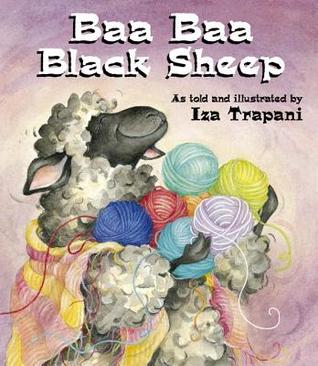 One by one, in Baa Baa Black Sheep, the animals come to Black Sheep expressing their needs.  The kittens want milk; the pig hungers for slop; the horse desires hay; the dog groans for bones; the cardinal pleads for some seed; and the mouse craves Swiss cheese.  Unfortunately, Black Sheep can't help any of them, and each one turns away in disgust.  Entitled frowns turn to surprised smiles, when Black Sheep gives them each a personalized gift made from her very own wool.  They realize Black Sheep wasn't just being selfish and truly does care.  She gave that which she gives best, and they vow to do the same for as long as they live.

Despite its controversial reviews, this Trapani rhyme may just be my favorite because I can so closely relate to Black Sheep.  We haven't always been blessed with an abundance, but we've always chosen to give of that which we have.  Unfortunately, for one reason or another, there have been too many times when that simply wasn't enough.  I let it discourage me and even began to think we had nothing of value to give.  I love that, despite the narcissistic behaviors of her friends, from the beginning of the book until the end, Black Sheep continues to knit for each of them.  What a beautiful reminder of the importance of sacrificial giving, as well as the essence of 2 Corinthians 8:12...


Now Jesus sat opposite the treasury and saw how the people put money into the treasury.  And many who were rich put in much.  Then one poor widow came and threw in two mites, which make a quadrans.  So He called His disciples to Himself and said to them, Assuredly I say to you that this poor widow has put in more than all those who have given to the treasury; for they all put in out of their abundance, but she out of her poverty put in all that she had, her whole livelihood.

Thanks so much for reading!  Have a terrific Tuesday!
Posted by Jinny Newlin at 7:00 AM

Poor little guy, I sure hope he is back to his sweet self soon. Penelope is dealing with a double ear infection too and a stuffy nose. It's so hard to see the littles when they don't feel well. She wants lots of extra snuggles right now. Take care!!

Oh no!! Hope Kaden is feeling better!! So much sickness right now. That book looks so cute. Made me thinks of my preschool class. We are dong nursery rhymes!!