Morning, y'all!  It's been awhile since I've given any kind of family update, and design team schedules always seem to be a little lighter around the first of the month.  So, I figured now was as good a time as any.  Of course, I can't photograph everything; but for those of you who are interested, here are some of the things that have kept my family and I running over the last month and a half or so, beginning with Adina's Awana Award Ceremony from this past Monday night. 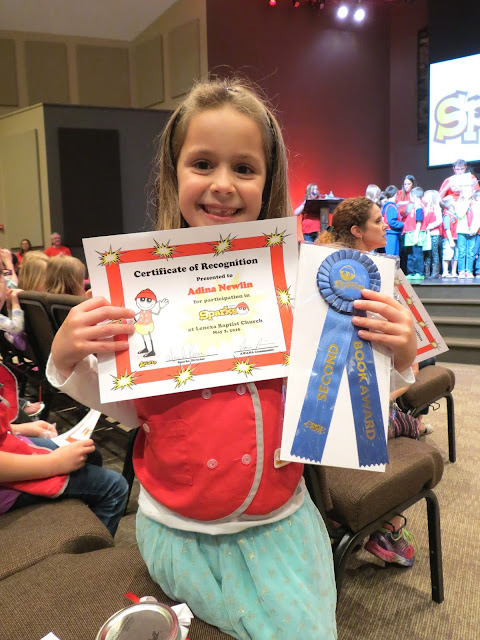 She memorized her scriptures for the year in record time and has been kind of floating the last couple of months, but she loves the company of all the other children and always comes home with a smile.  You can see her crowded in the very center of the group below, and my hubby is at the far right end, wearing a black, collared shirt, handing out awards.  He takes Adina to Awana (and stays to help) and Ezekiel to youth group on Sunday nights, while I get some quality time with our littlest. 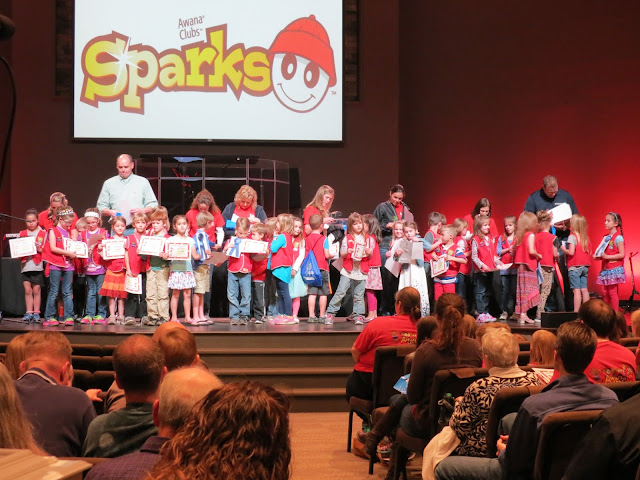 A little custard, not to mention fried pickles (Mmmm!), at Freddy's, ended the celebrations with style. 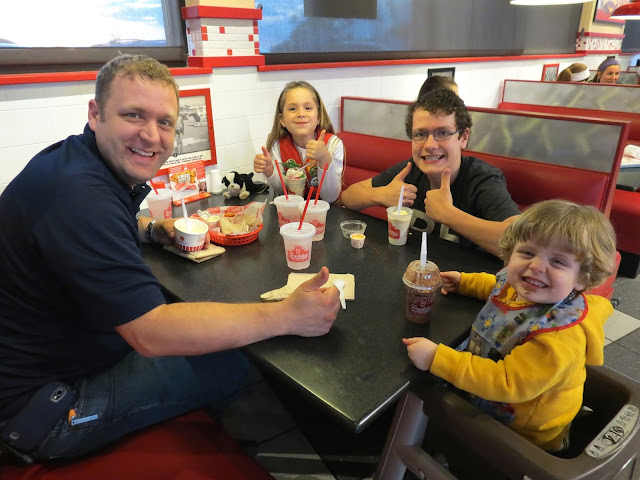 We've also been busy keeping up with soccer practices and games.  We're near the end of the season now, and Adina has learned so much.  She's even scored a couple of goals.  Woohoo! 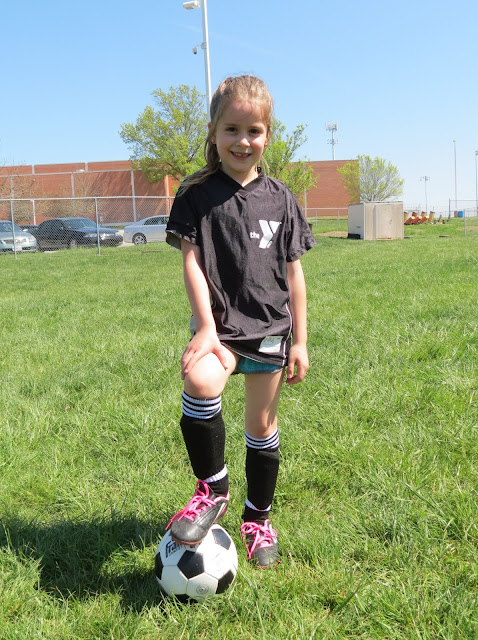 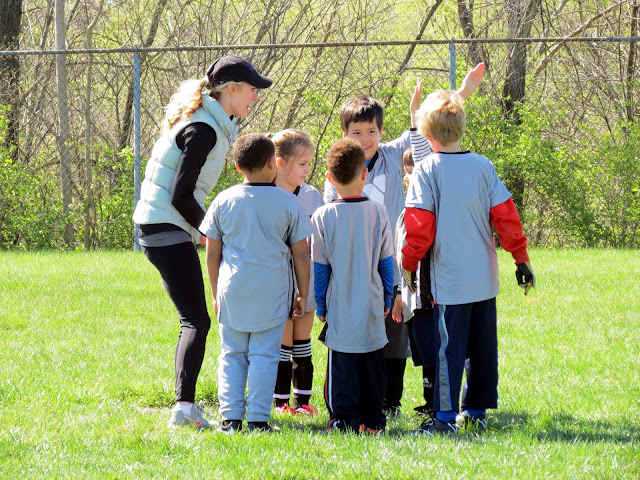 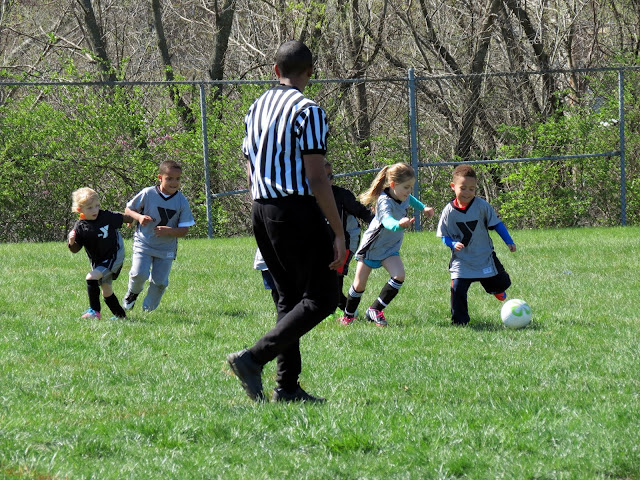 She decided early on that playing goalie was easier than chasing the ball all over the field... 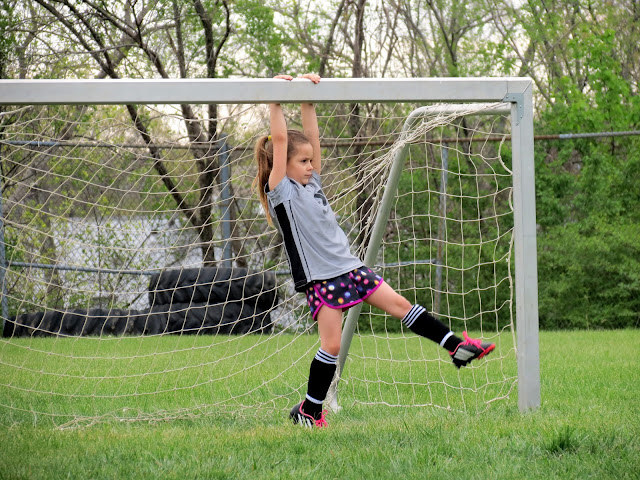 that is until the opposing team scored while she was supposed to be protecting the goal.  I was disappointed her coach even let her get away with this, but the kids kind of seem to be running the show most of the time. 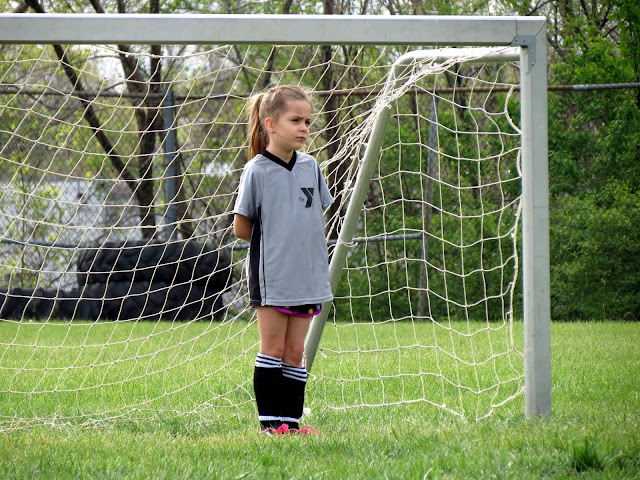 For the most part, we've had chilly weather; but the one Saturday it was pretty warm, she was looking for shade while waiting for her coach to call her back onto the field. 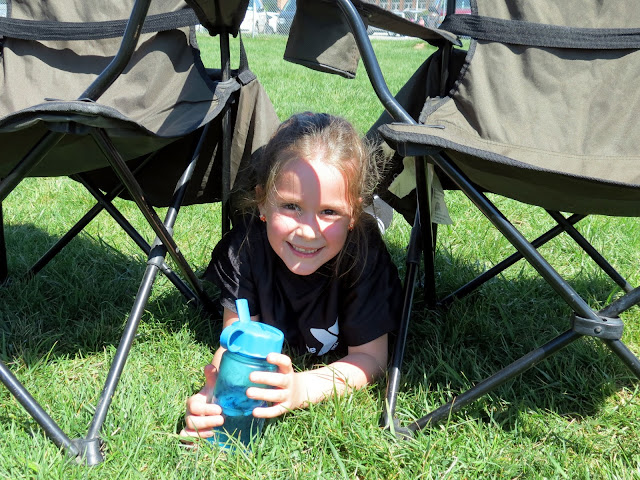 A good number of the children have been super fun to play with, but she's also ran into a handful who weren't the kindest critters on the block.  Some kids wouldn't even shake hands before or high-five after the games, and it wasn't for any particular reason.  They just decided not to, but I think that's something the YMCA could really help the kids improve upon, especially if they put a little more commitment into the coaching experience.  Thankfully, it's definitely nothing like we've encountered during the Upward basketball season or even at 3&2 Club during Ezekiel's baseball seasons. 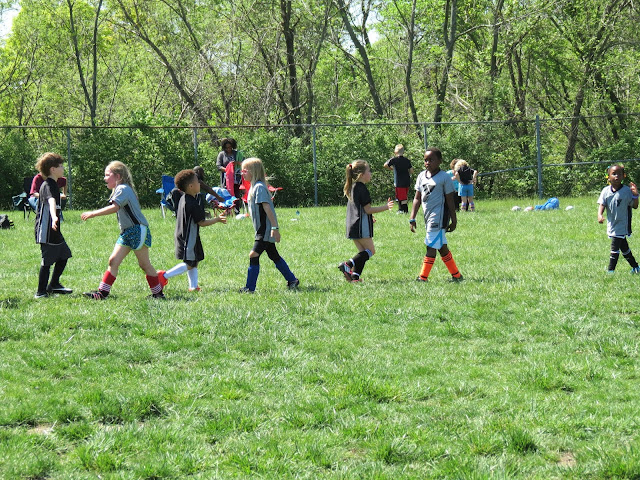 Speaking of baseball, practices and games for it, too, have kept us running.  Ezekiel played with the Brewers for the last three years, but his team fizzled at the end of last fall.  Only three boys from that team, that we know of, signed on to play with other teams this year.  Ezekiel was one of them.  He signed up as a free agent, and it wasn't until just before the summer season began that we even found out the Saints had picked him up to play.  Woohoo!  He's played second base, third base, and right field and done pretty well with all positions.  He's even hitting like a champ and seems to fit in with the rest of the guys flawlessly.  It's a group packed with personality for sure!  I think they help Ezekiel come out of his shell just a bit ;). 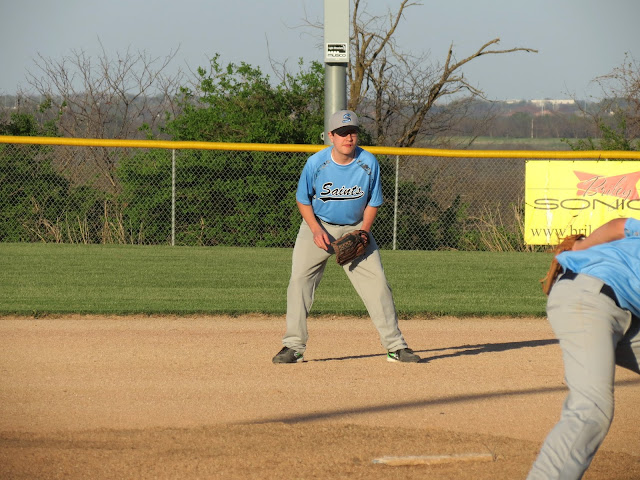 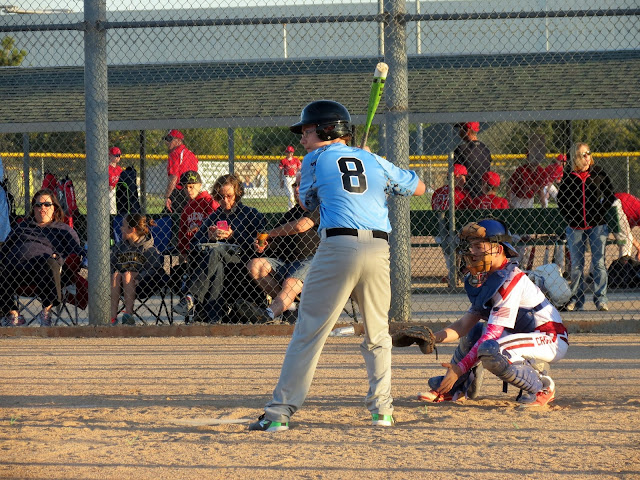 My little guy isn't playing sports yet, but he sure thinks he's part of the team. 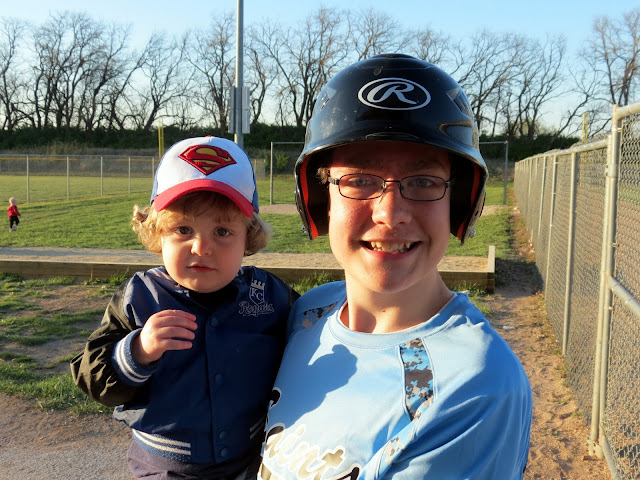 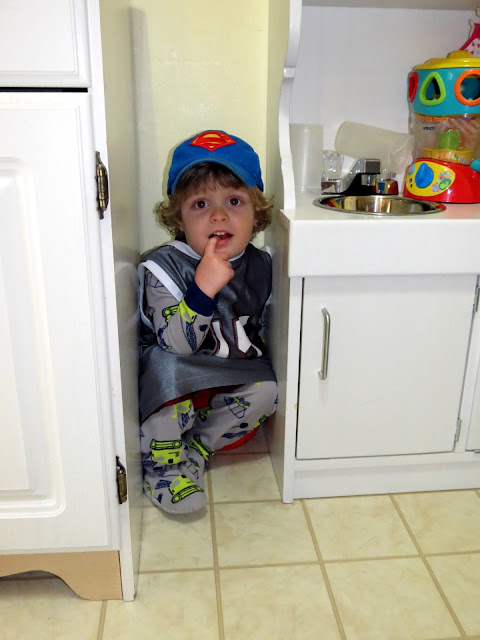 He's in love with Curious George right now.  He still doesn't talk much, but he says, "George", and it's super, stinkin' cute! 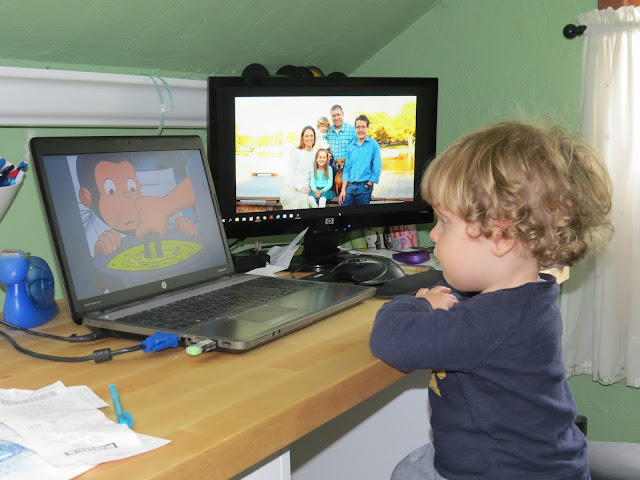 We've also been spending a lot of time reading.  No surprises there.  My little guy used to always have a ball in his hand, but now, it's nearly always a ball and a book.  LOVE that! 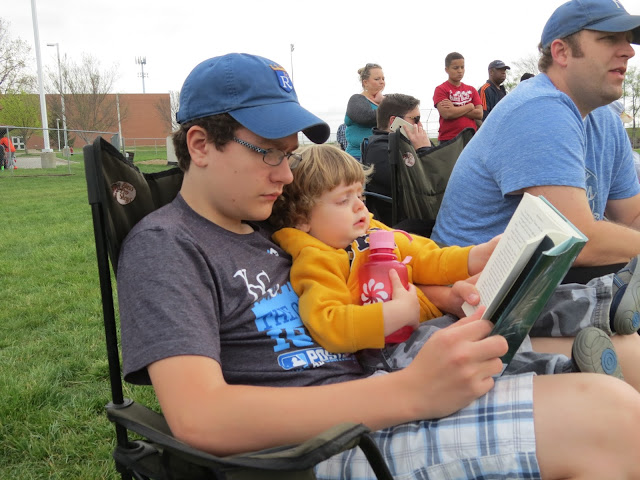 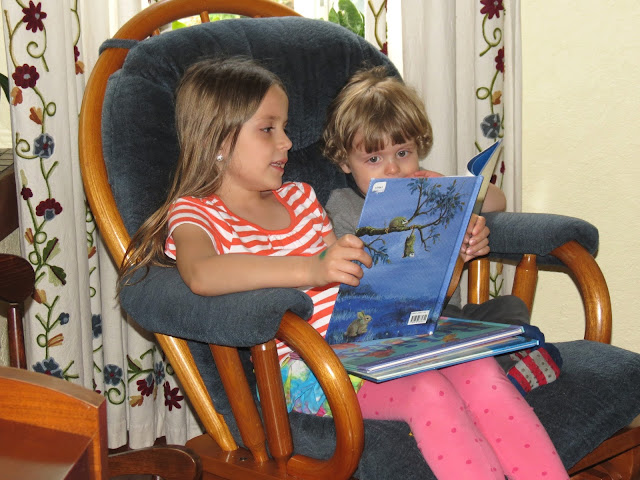 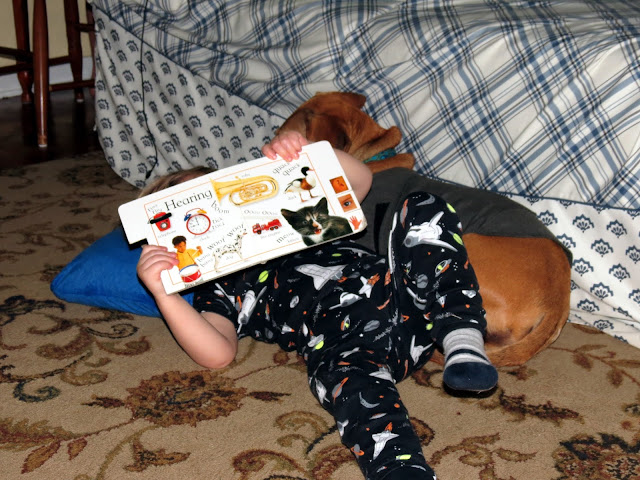 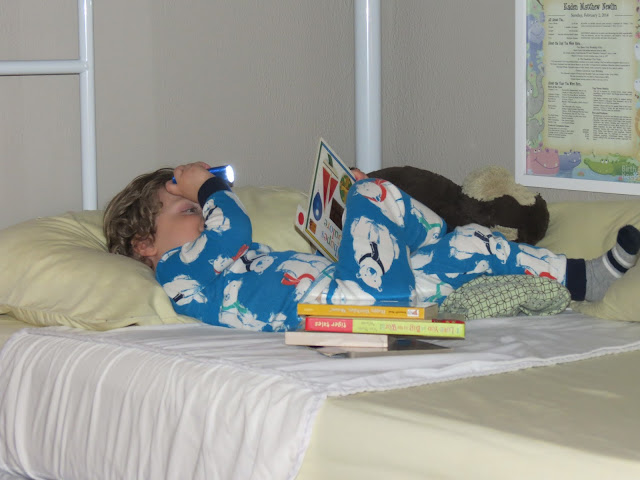 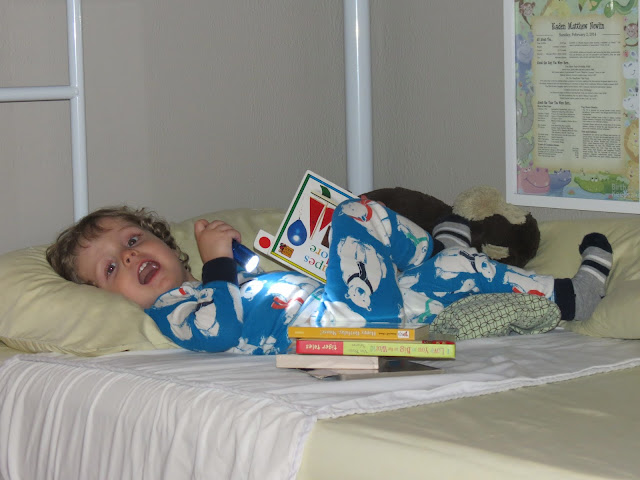 Oh, and I had to include a photo of this Chocolate Chip Cookies and Milk Cake from Sprinkle Bakes.  Mine doesn't look near as pretty as Heather's.  It was my fault for not getting it frosted until we had company over, drooling on it, while I tried to speed up the process.  But I'm pretty sure it tasted just as delicious.  Mmmm! 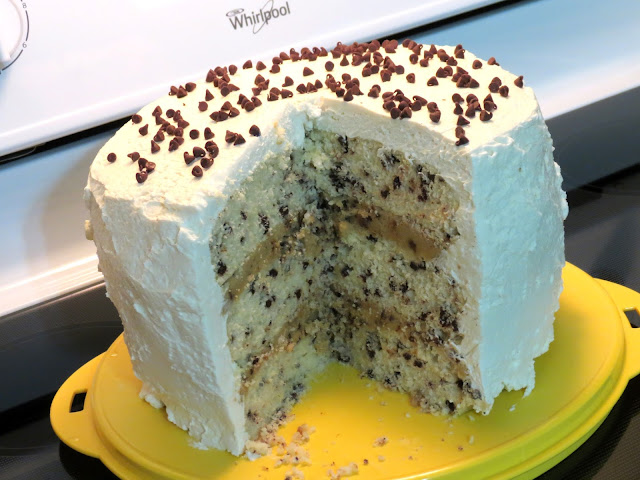 My big kiddo picked up a stomach bug this week, but he's on the mend; and my hubby's Jeep broke down, on his way to Paola for work, yesterday.  We definitely wouldn't recommended purchasing a vehicle from Country Hill Motors.  Live and learn.  So, we've still got that problem to solve; but we're happy, filled with life, and looking forward to what the future has to hold.  Thanks so much for checking in on us!  Have a blessed day!
Posted by Jinny Newlin at 7:00 AM

Loving all the photos!! Sorry to hear about her team and the other soccer teams :( Brookie goes to the Y for swim, and while not overly impressed, I can say they are all about team work!!

Love seeing the kiddos Jinny and your updates! The picture of Kaden snuggled up with his book and the dog is adorable!

Great family update Jinny. Love all of the photos, your kids are so photogenic! Love seeing there love for each other and for books!

Sorry about the stomach bug! Hopefully it is over quickly and doesn't spread! Sports can be frustrating, you've got the right attitude and hopefully that will rub off more on the kids than other kids or coaches when they are sub-par. I am loving how your love of reading is rubbing off on your kids!

Adorable photos! One of my son's first gifts was a Curious George cuddly toy from a friend ... He loved it and that's 33 years ago!

I just had to laugh at that picture of you guys at Freddys. Kaden had definitely learned how to cheese it up for the camera. Also love the one of him cuddles up with the dog. How do you guys fir all this stuff in! LOL