Morning, y'all!  I've got an October For the Love of Books post, for you all, today and just in the nick of time, too.  Gracious!  Talk about procrastination!  I really struggled with which book to share this month.  I wanted to go with more of a seasonal pick; but a stack of great reads, that I've pushed aside, for one reason or another, over the course of the last four years now, kept calling for my attention.  So, Ezekiel helped me decide on one of his favorites from that stack.  It is written for children ages four to eight and cleverly assembled by one of my all-time favorite, talented geniuses. 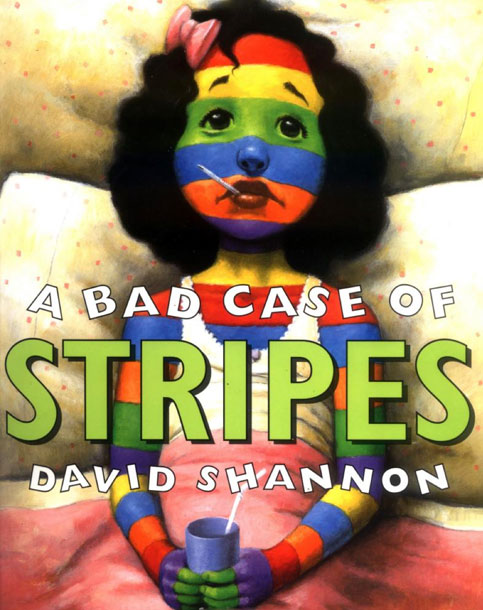 A Bad Case of Stripes, written and illustrated by David Shannon, tells the story of Camilla Cream, who loved lima beans but never ate them, because her friends hated them.  She fell victim to always worrying about what other people thought of her to the point of it making her break out in a rainbow of stripes that forced her to stay home from school.  Dr. Bumble was called in, couldn't find any reason to keep her home another day, gave her some ointment to clear up the stripes, and went on his way.  The next day, at school, everyone laughed at Camilla.  While she tried to act as though everything were completely normal, during the Pledge of Allegiance, her stripes "turned red, white, and blue, and she broke out in stars!" and that was only the beginning of her transformations.  She was sent home from school, termed a "distraction."  Dr. Bumble called in the Specialists, who instructed her to take one each of their prescribed medications; but by the next morning, Camilla had turned into a giant, multi-colored pill.  This time, Dr. Bumble called in the Experts; but they "didn't have a clue, much less a cure."  Camilla and her family "were swamped with all kinds of remedies from psychologists, allergists, herbalists, nutritionists, psychics, an old medicine man, a guru, and even a veterinarian.  [But] each so-called cure only added to poor Camilla's strange appearance, until it was hard to even recognize her."  Fortunately, a quiet knock at the door brings Camilla sweet relief in the form of a kind, old woman and her handful of lima beans.  Will Camilla remain a slave to her constant need to please others, or will she finally learn to just be herself?

Thanks, as always, for humbling me with a visit!  Stay safe, and happy reading, friends!  I'll see you on the other side of October.  Hugs!
Posted by Jinny Newlin at 6:00 AM

One of my FAVORITE books!!!