I don't know about in your neck of the woods, but it's been raining a lot in mine.  I'm not complaining.  We need it desperately, but some of the frustrations surrounding such made me think of a super fun and vibrantly illustrated book that my kiddos and I love to read.  So, with March coming to a close in just a couple of short days, I thought it only fitting to sneak it in for this month's book pick.  It is written for children ages four to eight. 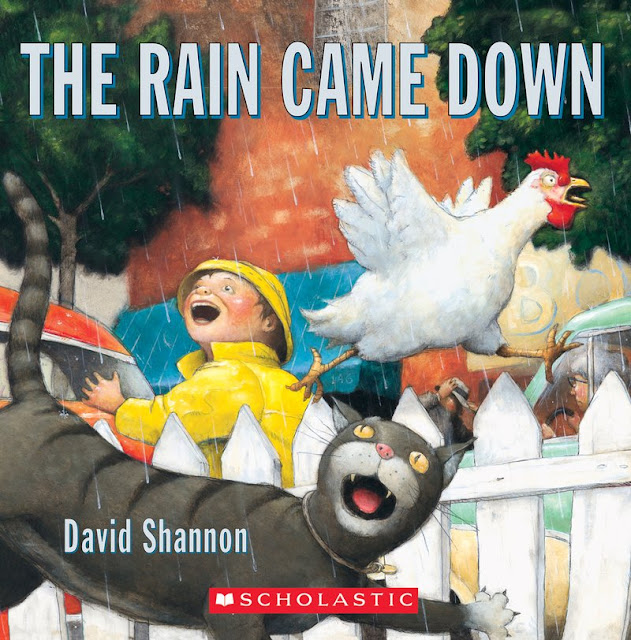 The Rain Came Down, written and illustrated by Caldecott Honor artist David Shannon, is a story about just that, one Saturday morning, when the rain came down.  The dog barked at the cat.  "The man yelled at the dog and woke up the baby," angering his wife.  A policeman stopped his car to see what was wrong, which blocked a taxi, upsetting a woman who didn't want to miss her plane.  Horns began to honk.  The painter accidentally bonked the barber on the head, as he was coming down his ladder.  The baker unintentionally poked the pizza man in the nose with his umbrella.  The grocer stomped out on the sidewalk, yelling about needing his tomatoes from the delivery man, who, too, was stuck in traffic, blocked by the policeman's car.  As he did so, he ran into a lady carrying boxes down the sidewalk, causing her to trip into his fruit stand, knocking oranges, apples, and lemons all down the sidewalk.  The entire block was fuming.  "And then, the rain stopped!  And so did the noise.  The sun came out, and the air smelled fresh and sweet."  A rainbow stretched across the sky.  Everyone stopped arguing and began helping one another.  "Then, the man, his wife, and their baby had a picnic together in the backyard."

Rain or shine, may your Thursdays be extra blessed!  Thanks so much for visiting; and happy reading, friends!
Posted by Jinny Newlin at 6:00 AM

Another great recommendation! Haven't seen this one yet, but we love David Shannon!

I am a former kindergarten teacher turned wife of 18 years to BJ and stay-at-home, homeschool mommy to three beautiful gifts from God, Ezekiel (16), Adina (11), and Kaden (6). When I'm not taking care of or playing with my family, you can find me cooking, baking, gardening, sewing, and of course, papercrafting. My love for the latter started over seventeen years ago, but my love for creating began before birth. I feel overwhelmingly blessed by all God has given me and know that if I continue to keep my eyes on Him, He'll keep me soaring. 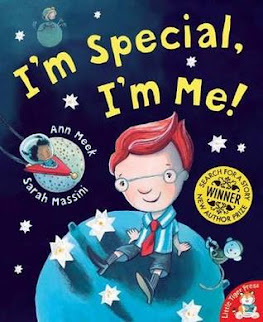 All images are copyright Jinny Newlin. Shared images are not to be copied, without written consent, and/or used for publications or design contests. If you find yourself inspired, and I hope you do, and would like to share your idea on the internet, please note where you found the original idea. Thanks!