Welcome back, y'all!  Shall we get rid of that ugly kitchen from yesterday's Part 1 post?  Please keep in mind that it gets much worse, before it gets better, as well as the fact that I am not a kitchen designer.  I do, however, know what I like and trust that any future buyers will be pleased with my neutral choices.  Over the last 13 years, we've talked circles around different footprints; but ultimately, we came right back to where we started.  We're working with a number of entrances/exits that could not be moved, without major reconstruction, due to the location of our stairwells, as well as the desire to seat our whole family around one big table, not to mention a budget.  With that said, we started getting rid of those nasty, upper cupboards... 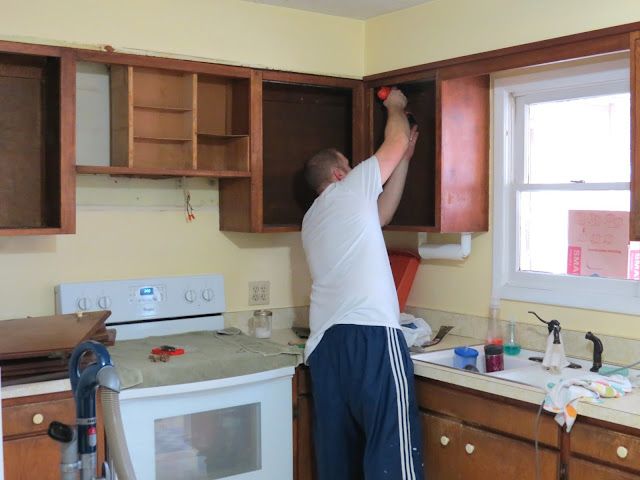 and moved on to the soffit.  The corner, can light was so far away from the counter-top that any and all prep work was shadowed by my very own head.  I cannot tell you how frustrating that has been over the years.  Ugh!  So, it had to be moved, as well as replaced for a brighter, LED, daylight option.  We had a secondary, can light near the sink; but I wanted a pennant centered over the sink.  I love this photo, because you can see that the popcorn ceiling has already been partially scraped. 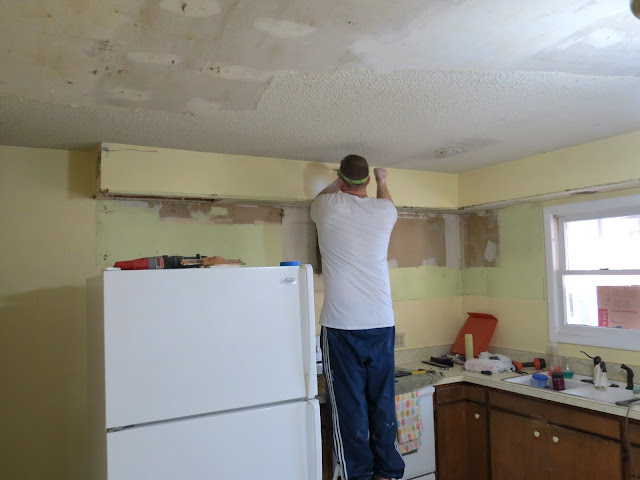 We also needed to add outlets for the microwave that will be relocated to above the stove, as well as the dishwasher.  So, while we were playing with electricity AND because I'm painting those walls white, we swapped all the outlets, switches, and covers from almond to white. 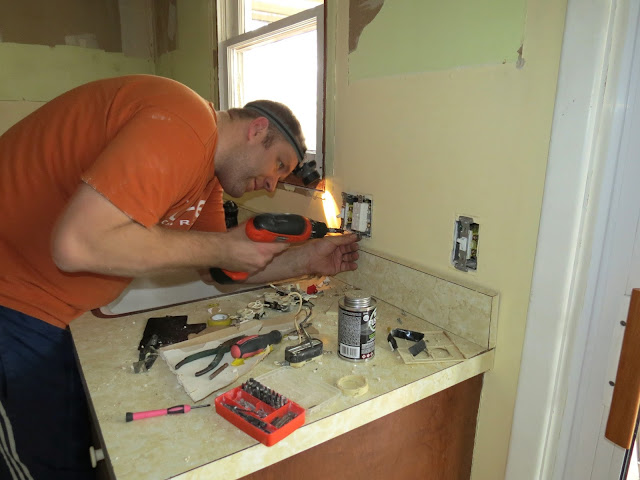 Then, those lower cabinets came out.  YUCK!  All that insulation, as well as sheet-rock, behind the sink had to be replaced; but while it may not look so good in this photo, the underlayment was in excellent condition, which was a HUGE win for the team! 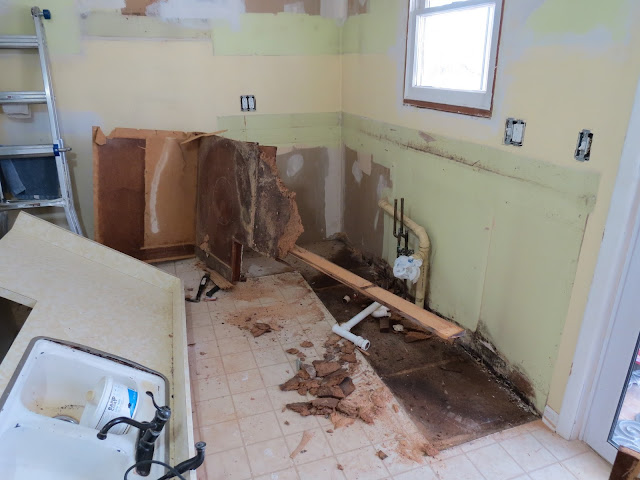 In addition to moving all those electrical components above, we also had to relocate the sink vent from inside the soffit, as well as taking up tons of room in the lower, sink cabinet (See above.), into the wall.  Even though I still had a couple of layers of sanding and mudding to go, doesn't this look a ton better?  Again, I'm super excited about the cupboard space we're gaining by getting rid of that soffit.  Woohoo!  We also added lots of new insulation into the attic and walls, while we had easy access. 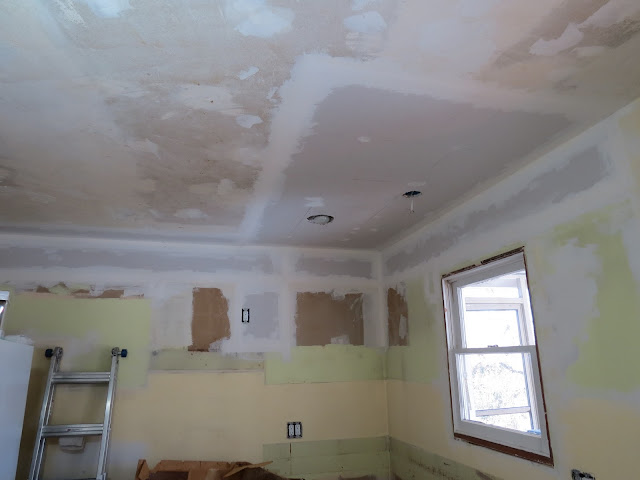 Then, we were on to applying a knockdown ceiling texture.  My dad, as well as a hired contractor, did the other ceilings in our home; but I thought it looked totally doable.  So, we bought what supplies we didn't already own and went to work.  The best part about the finished product is that you can't even tell which ceiling was done by me and which ones were hired out.  Woot!  Woot! 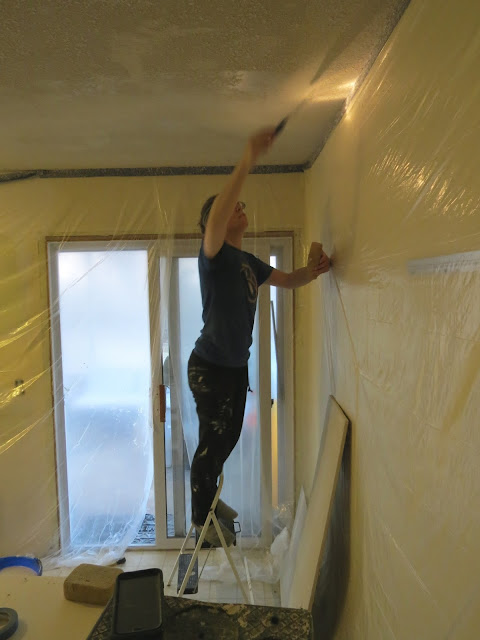 Here I am just doing some cleaning up; but I love that you can see what we did with that sink area behind the plastic, as well as how well that underlayment cleaned up. 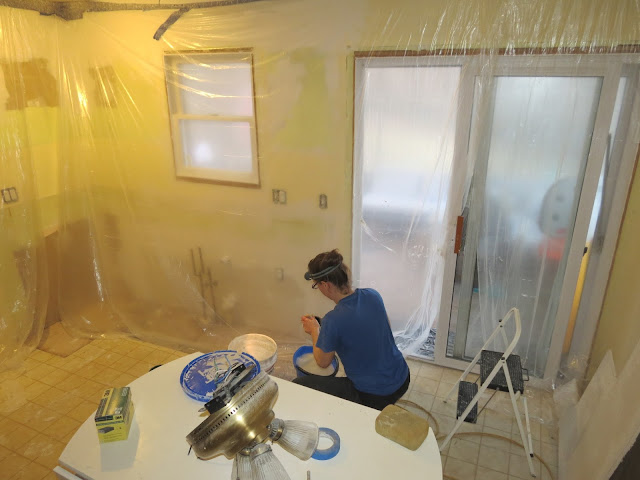 Next, we turned those walls, as well as the ceiling, white.  No, you won't see behind the cupboards or beadboard treatments we have planned; but those walls needed a fresh start.  My hubby and I were pretty wrapped up in looking after the kids and painting all at once, that we forgot to snap a photo of our painting efforts; but Ezekiel got this one of me cleaning up the floors afterward. 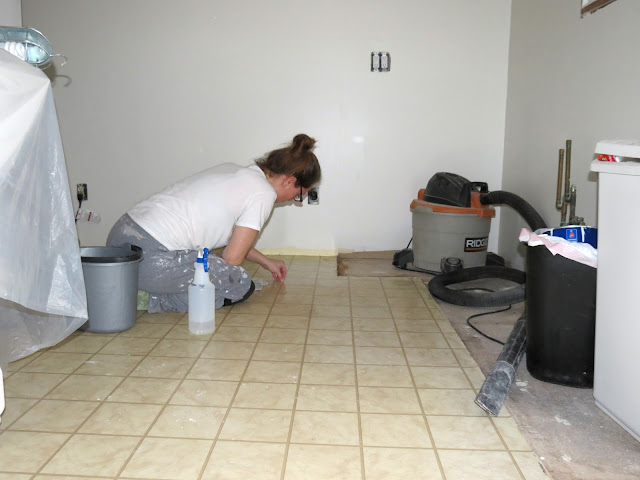 Our plan was to lay a floating floor right over the linoleum, since the hardwood floors, found throughout the bulk of our home, had been removed somewhere along the line; however, the new flooring raised the existing floor enough that it created issues with the sliding door leading to the back porch.  We were also concerned about stubbed toes leading from the original, hardwood floors into the kitchen itself.  So, my hubby painstakingly removed every last bit of the linoleum.  I'm still so, SO sad that there weren't hardwood floors under there.  Sniff.  Sniff. 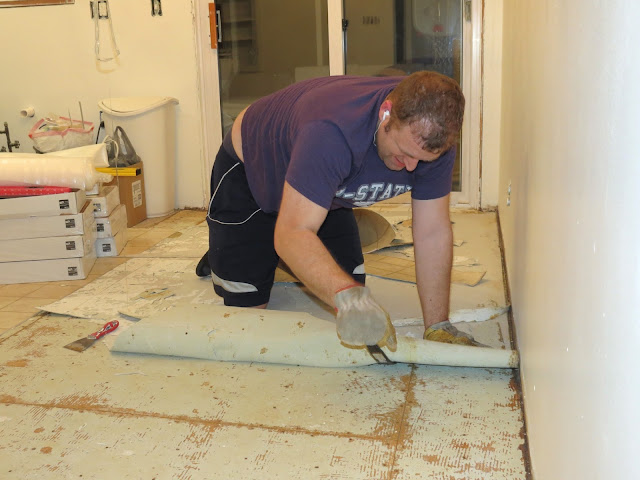 Before we moved in, the previous homeowners had converted the single-car garage into a bedroom with a half bath, as well as what we call the library.  (They called it a dining room, but it doesn't even connect to the kitchen and is simply too small for a respectable table.)  We replaced the flooring in those areas, just over four years ago, with a floating, cork floor that we love to bits and pieces.  So, naturally, we chose to carry that same flooring into the new kitchen.  I love that it's easy to install; durable; narrows down the variety of flooring, found throughout our 926 square feet, from five to three; compliments the original hardwoods; is super soft under bare toes; and hides dirt magnificently ;).  Another win for the team! 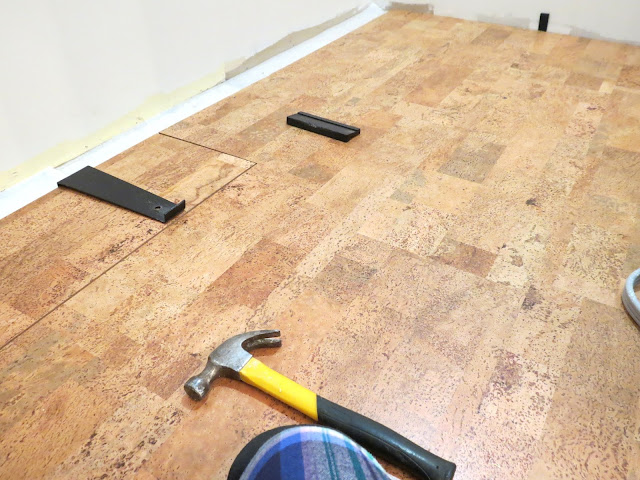 We were finishing that floor at about one o'clock in the morning, but check out how bright it was thanks to my new lighting. 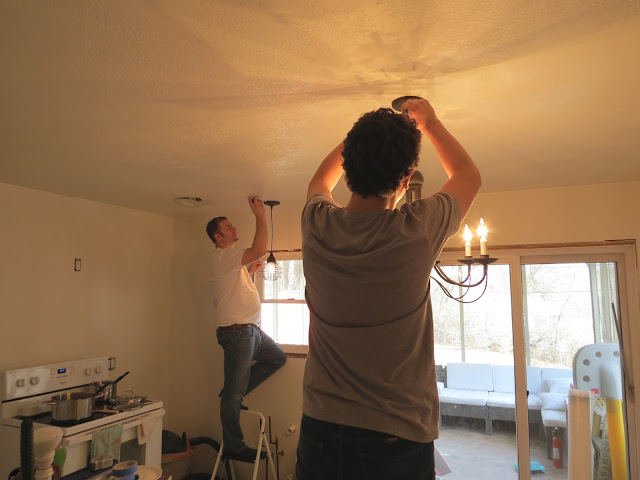 Cabinets are next on the agenda.  We've had a few setbacks, in that area, with what was sent to us versus what we ordered.  Ugh!  The ones that are correct are stunning and just what I imagined.  Fortunately, none of the mistakes were made in the lower cabinetry; so, counter-tops can now be measured for and ordered.  We're getting there.  Stay tuned!  Thanks so much for checking on us, and have a terrific weekend, friends!  Hugs!
Posted by Jinny Newlin at 6:00 AM

Lots of hard work, but it will be SO WORTH IT!