With my family now being in a new city and state, for that matter, trying to find our place in this new world of ours, I thought it would be fun to share a book about making new friends for this month's For the Love of Books pick.  It is written for children ages two to five and cleverly illustrated with such precious, little, character faces to boot. 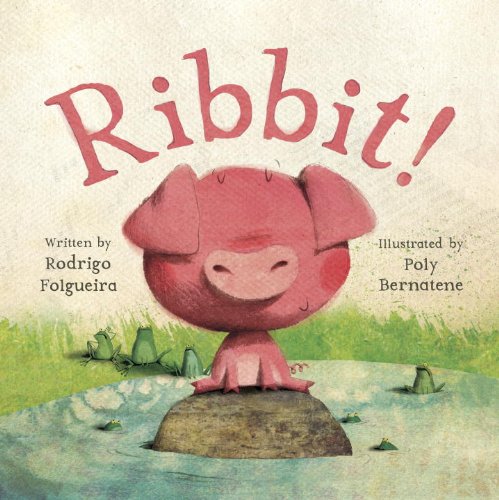 Ribbit!, written by Rodrigo Folgueira and illustrated by Poly Bernatene, begins with the discovery of a surprise visitor, a little, pink pig, to a frog family's pond.  When they approach the visitor and ask what they can do for it, the pig's only response is, "Ribbit!"  "News of the little pig who thought he was a frog spread fast" and created such a commotion among the animals that they decide to ask for advice on what to do with the pig from the wise, old beetle, who agreed to visit the pond.  But the little pig was absent, upon the animals' return.  "'Where did the pig go?' the animals cried.  'Who was he?  What did he want?'"  "'Maybe,' said the wise old beetle, 'he just wanted to make new friends.'  And sure enough, sitting on a branch, high up in a tree nearby, was the little pig," saying, "Tweet!"

I love that this book ends with all of the animals joining the pig up in the tree with the birds.  It's such a precious way to relate to young children and a winner in my book.  Thanks so much for reading!  Have a sensational Tuesday, friends!  Hugs!
Posted by Jinny Newlin at 7:00 AM

Hope everything is going well in the new place!!!!!!!!

I have been missing in action for way, way too long. I hope the move has gone well for you and that your beautiful home in KC has sold as well. Think of you often despite not commenting much at all!