Evening, y'all!  Just stopping in, last minute again, to share this month's For the Love of Books pick.  This happy, little treasure is written, for children ages four to seven, by one of my all-time favorite authors.  Check it out! 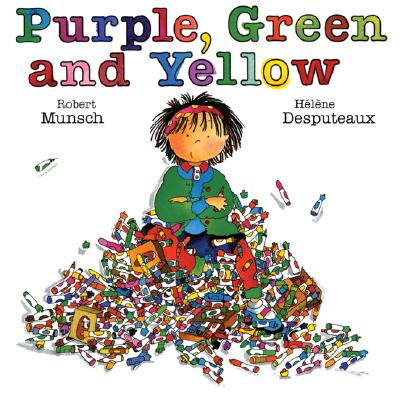 Purple, Green and Yellow, written by Robert Munsch and illustrated by Helene Desputeaux, tells the story of a young artist, named Brigid, who "went to her mother and said, 'I need some colouring markers.  All of my friends have colouring markers.  They draw wonderful pictures.  Mommy, I need some colouring markers.'"  Her mother didn't see the harm in new, washable, colouring markers; but soon, Brigid got bored and proclaimed, "Mom, they have colouring markers that smell like anything you want!  Mom, I need those colouring markers."  Brigid's mother complied; but, once again, Brigid got bored and needed super-indelible-never-come-off-till-you're-dead-and-maybe-even-later colouring markers.  Because Brigid had not drawn on the floor or the walls or herself, Mother went out and got 500 super-indelible-never-come-off-till-you're-dead-and-maybe-even-later colouring markers.  When Brigid, in typical fashion, got bored, she began to color her fingernails, which led to her hands and face and belly-button and herself almost entirely all over; before she even realized what she had done.  To solve the problem, she found a marker that was the same color that she was and "coloured herself all over until she was her regular colour again;" but when her mother asked her to wash her hands for dinner, her true colorful self shone right through.  Will her doctor be able to fix everything with the large, orange pill she prescribed?

This one has a surprise ending that you won't want to miss.  Be sure to pick up or borrow your copy today.  Thanks so much for stopping by!  I'll see you all next month.  Happy reading, friends!
Posted by Jinny Newlin at 11:53 PM

This sounds so FUN!